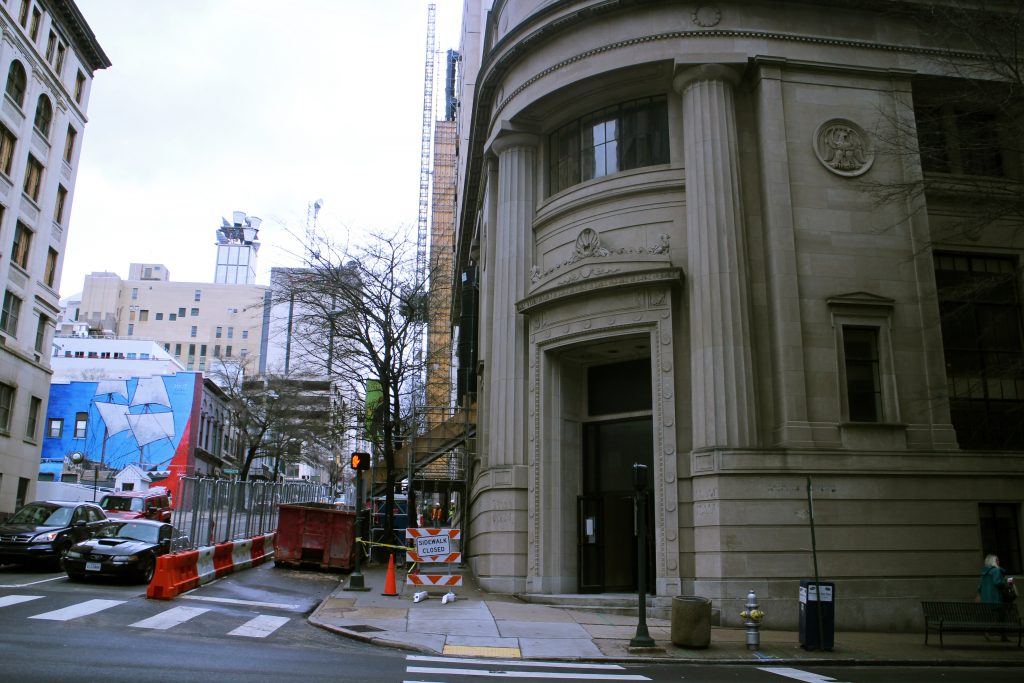 Crews work on the interior of the former Signet Bank building downtown. Photos by Katie Demeria.

Plans to renovate the historic Signet Bank building in downtown Richmond, adding apartments and commercial space to the central business district, are right on schedule.

A few minor adjustments have been made to the renovation of both the historic three-story building at 800 E. Main St. and the adjacent 11-story office tower at 7 N. Eighth St., but the $30 million project is still expected to wrap up before December.

The Edison Co. and Monument Cos. teamed up in September of last year to purchase the two properties for $8.5 million. The project will total 200,000 square feet.

“We’re right on schedule and right on budget,” said Chris Johnson, a principal with the Monument Cos.

The project was initially slated to have 196 apartments and one commercial space. But Johnson said that has been adjusted to 195 units with two commercial spaces totaling 9,778 square feet. 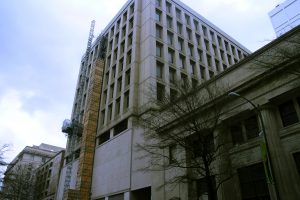 A rooftop pool will be installed in the tower section of the apartment complex.

“We had a commercial tenant that was interested in a little more space,” Johnson said.

Of the available space, 8,000 square feet has been leased out. Johnson did not identify the tenant. The other space, which is almost 2,000 square feet, is still open to possible tenants.

And the project’s newest feature includes creating the central business district’s only rooftop pool, allowing residents to swim 140 feet in the air.

“We really want this to be a high-end project that has a lot of amenities,” Johnson said. “We want it to be well-known in the community as a great place to live.”

The timeline, according to Johnson, is still on track. Marketing and pre-leasing for the apartments should begin in mid-June. Apartments will start opening in late August, and all units should be completed by December.

Construction crews will start hanging drywall, a significant milestone in the construction process, in a few weeks.

Monument Construction is the general contractor for the project, and Scott Fowler of Fowler Architecture is the architect.

“I think it will fit right in with what you’re seeing the in central business district,” Johnson said. “It’s good to replace tired Class-C office space that’s vacant with beautiful Class-A apartments. You’ll see more restaurants, more business and more things for folks to do.”

The Signet Bank building was built in 1925. Its conversion is similar to both the John Marshall’s and First National’s.

Its difficult to compete with the energy you find in the offices and personnel of Monument Construction. These folks continue to turn old tired buildings into vibrant new living spaces. The City’s financial district rebirth as a place to work, play and live continues with the repositioning of this landmark building.