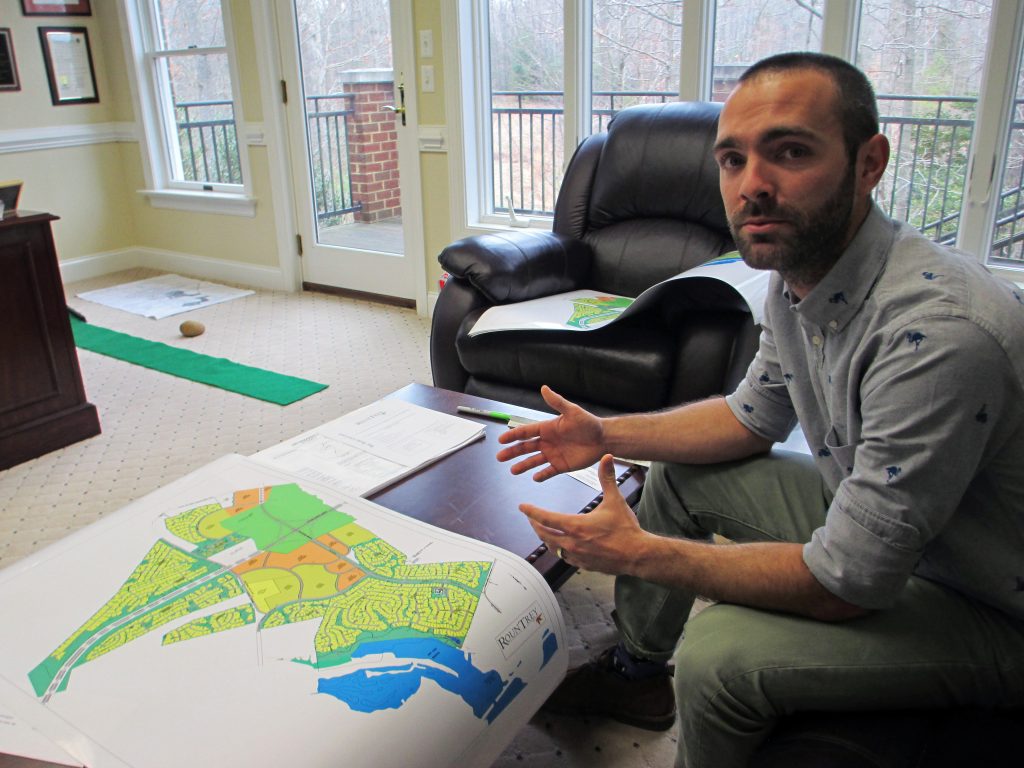 Correction: A previous version of this article incorrectly reported that Homearama begins Friday. The event begins May 1 and runs through May 17.

Ten years after work started on the project, a 900-acre Chesterfield community is about to get its close-up.

The RounTrey development, near the westernmost end of the Powhite Parkway, is quickly taking shape while playing host in coming weeks to this year’s Homearama.

The three-weekend showcase of homes and home design kicks off May 1. The event is put on annually by the Home Building Association of Richmond, which selects a different community to host the event each year.

Nine homes in RounTrey are the focus of this year’s event, each built by a different builder and featuring interiors by different design firms. Homes are offered for tours and available for purchase, with prices starting in the high $400,000s.

Last year’s Homearama was held in Magnolia Green, one of the largest new developments in the Richmond area. 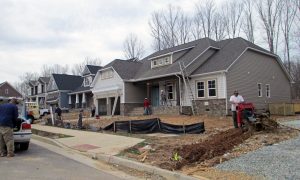 Work is underway on hundreds of lots in the development.

RounTrey is a mixed-use development just east of Brandermill, at the northeast end of the Swift Creek Reservoir. Slated to consist of single-family detached homes, multifamily townhomes and commercial and office uses, the site straddles a future extension of the Powhite Parkway and a planned interchange with Woolridge Road.

The project’s developer is Danny Sowers – a third-generation builder-developer whose father, Doug Sowers, is also involved in RounTrey. The younger Sowers said work on the project started 10 years ago, just before the recession that stalled what he described as steady growth.

He said that in 2009, the development sold just one lot.

“You drive RounTrey now, and you hear hammers clanking,” he said. “We’re growing at about 20 percent a year at this point.”

Two sections of the community’s single-family neighborhoods have been started along the east side of Woolridge Road. Sowers said so far more than 200 lots have been developed – and all sold – and a third section of 109 lots is about to be opened up. Those lots were all presold in two days, he said.

“So the demand is definitely there for this product,” he said. “It’s a far cry from where we were in 2009.”

Sowers said as many as 400 lots are slated to be ready this year.

RounTrey’s complete plans call for as many as 1,300 detached home sites, 440 townhomes and more than 250 acres of commercial, retail and office space. Sowers said full build-out is several years away. 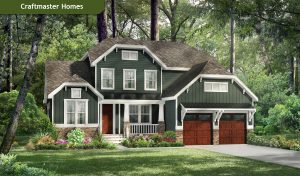 Rendering of a RounTrey Craftmaster home. Courtesy of RounTrey.

“I would like to be done with the residential within the next 12 to 15 years, if not sooner,” he said. “The commercial and multifamily might be farther out – 15 years. So this is a long-term project.”

Sowers’ father has developed several subdivisions in Chesterfield, including the Collington community to the south of the reservoir. Danny Sowers is vice president of both projects, but he said Collington is his dad’s project. RounTrey, he said, “is my baby.”

Sowers said the community is attracting “move-up” buyers in their late 20s or early 30s, as well as empty-nesters looking to downsize.

In addition to site work, the project also involves the extension of Powhite Parkway to its future connection with Woolridge Road. Sowers said the Powhite extension is expected to cost $7.5 million, but the developer is also required to extend Woolridge as well, by about three-fourths of a mile, at a cost of $4.5 million. That brings the project’s capital improvements to a total of $12 million.

Sowers said the Woolridge extension must be built within the next five years, while the Powhite extension will be dictated by residential development. RounTrey’s commercial component cannot be built before Powhite is extended, Sowers said.

Such costs are being financed by Citizens and Farmers Bank, which Sowers said has provided financing from the start. Proceeds from sales are being put into a fund through the bank to help pay for the capital improvements, he said.

Homearama starts May 1 and continues through May 17 on Thursdays through Sundays.

Sowers said the event will feature entertainment for kids, live music and food trucks, in addition to the home tours. Tickets are $8 in advance and $10 at the gate.

“It’s big for us,” he said. “It’s good for our residents. They get to talk about their neighborhood.

“We’re ready for things to turn around. And we’re seeing it,” he said. “This year has already looked better than last year. So we’re really excited – not only to host Homearama, but also to grow the neighborhood.”

The Sowers family has been instrumental in Chesterfields growth for the last fifty or so years. Rountrey is their crown jewel. it’s been a labor of love for Doug since he began assembling it twenty years ago, and will be the project that consumes Danny’s professional career. This Homearama will be very special because the home prices will be kept within reason and the location is outstanding. I look forward to visiting.

Seriously, Bruce? You are always giving positive reviews on this site because you are hoping to get a FAT commission.
However –
This project will have to compete with several other new home construction communities as well as existing neighborhoods in the 23112 & 23113 zip codes. There are NOT enough incomes or careers to support this growth.

Whoever you are, I make positive statements about positive people and the risks they take to make Richmond a better place to live. I’ve never made a dime from the Sowers family and you have no basis for your accusations. And your negativism about growth is not only baseless but ignorant. You sir deserve no “positive review”.

Congratulations Danny Sowers!! Any type of real estate development takes a lot of patience, hard work & diligence. The development looks beautiful. I wish the west end or Short Pump would get a craftsmen style neighborhood. Chesterfield now has Rountrey and Hallsley. The Sowers vision has proved to pay off. Now please find some land in west end to build some quality non cookie cutter houses! 🙂

Ummm, – Just saying , Hallsley is a cookie cutter neighborhood for the most part. Don’t know about Rountrey.
We looked to purchase a home there and did not due to the overpriced homes in Hallsley not to mention the homes are very close together on all sides (unless your home backs up to open space which are not very many choices). Ride out there and look for yourself or map it.

Another of several reasons why Chesterfield housing values will never, ever recover. The old county board approved over 40,000 building lots so whenever there’s a slight uptick in prices, developers simply build out some more, and we get more sprawl.