ABS Technology was named one of The Channel Co.’s CRN Tech Elite 250, a list that recognizes top IT solution providers that have invested in the experience needed to earn advanced technical certifications.

Ellwood Thompson’s Local Market has raised its minimum wage rate from $9 to $10.10 an hour. The new rate is $2.85 an hour higher than the national minimum wage.

Compare.com recently signed its 50th insurance carrier to its panel, after launching in March 2013 with only three carriers.

Nudge recently launched its Nudge+Coach app, a program that connects users with health coaches and professionals and was recently featured in the New York Times.

River City Food Tours held its Carytown Sweets Tour during May, allowing guests to check out Carytown’s sweeter offerings during up to six different stops at nearby bakeries, cafes and chocolate shops.

Tuffy Stone of Cool Smoke Barbecue was awarded Kingsford Charcoal’s Grand Champion title during the Annual Kingsford Invitational. Stone competed against five other pitmasters from around the country for the title and $50,000 prize. 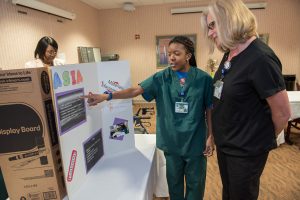 Project SEARCH interns created posters to showcase highlights of their internship rotations at MRMC this year.

Five of HCA Virginia’s hospitals – Chippenham, Johnston-Willis, Henrico Doctors,’ Parham Doctors’ and Retreat Doctors’ – were given the “A” grade in the spring 2015 Hospital Safety Score, which rates how well the hospital protects patients from errors, injuries and infections.

Bon Secours St. Francis Medical Center received the Magnet designation as part of the American Nurses Credentialing Center Magnet Recognition Program. The recognition is given to hospitals that demonstrate strong leadership within the nursing staff. 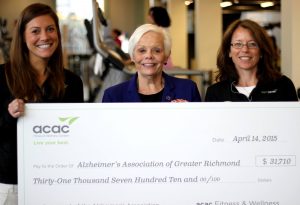 Jack Cullather was recently awarded the Ronne Jacobs Leadership Award at the Legal Information Network for Cancer’s spring awards luncheon. The award recognizes an individual that has given significantly toward improving lives in Richmond.

ACAC Fitness and Wellness Center provided the Alzheimer’s Association of Greater Richmond Chapter with a $31,710 donation after the organization’s 30 Days for $30 campaign.

The Greater Richmond Partnership was named one of Site Selection magazine’s Top Economic Development Groups of 2014. The organization was previously named in 1996, 1997 and 2000 and was awarded honorable mentions in 1998 and 1999.

The Science Museum of Virginia recently hosted its Science on Tap event and raised more than $45,000 after 1,200 guests and 100 local volunteers attended the inaugural craft beer event.

VCU was recently given a $2.3 million gift by Inger Rice to fund a multi-building overnight lodge and construct a new research laboratory on the property in Charles City County. 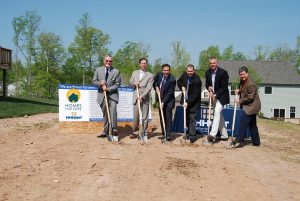 HHHunt broke ground May 5 on a new Home for Hope. The  house, located in Chesterfield County’s Magnolia Green community, has already been purchased and is scheduled to be complete by the middle of August.

H.J. Holtz & Son recently opened an appointment-only residential interior design studio in Scott’s Addition, right around the corner from the company’s primary offices. The space operates as a showcase to illustrate what is available to clients.

Local developer HHHunt recently broke ground on Virginia’s first Home for Hope. All proceeds from the home will go to Hope International, which works to alleviate physical and spiritual poverty throughout the world.

Twelve Vandeventer Black attorneys from the firm’s Norfolk and Richmond offices were selected as 2015 Virginia Super Lawyers. Stephan Andrews, James Cosby and Douglas Palais were chosen from the Richmond office.

Brian Burns of Dixon Hughes Goodman was awarded the Virginia Society of CPA’s Top 5 Under 35 leadership award for 2015.

The Virginia Bankers Association announced the winners of its $2,000 2015 VBA Bank Day Scholarship Program. The award was given to six high school students from around the state, one overall statewide winner who received a total of $6,000, and six honorable mention winners.