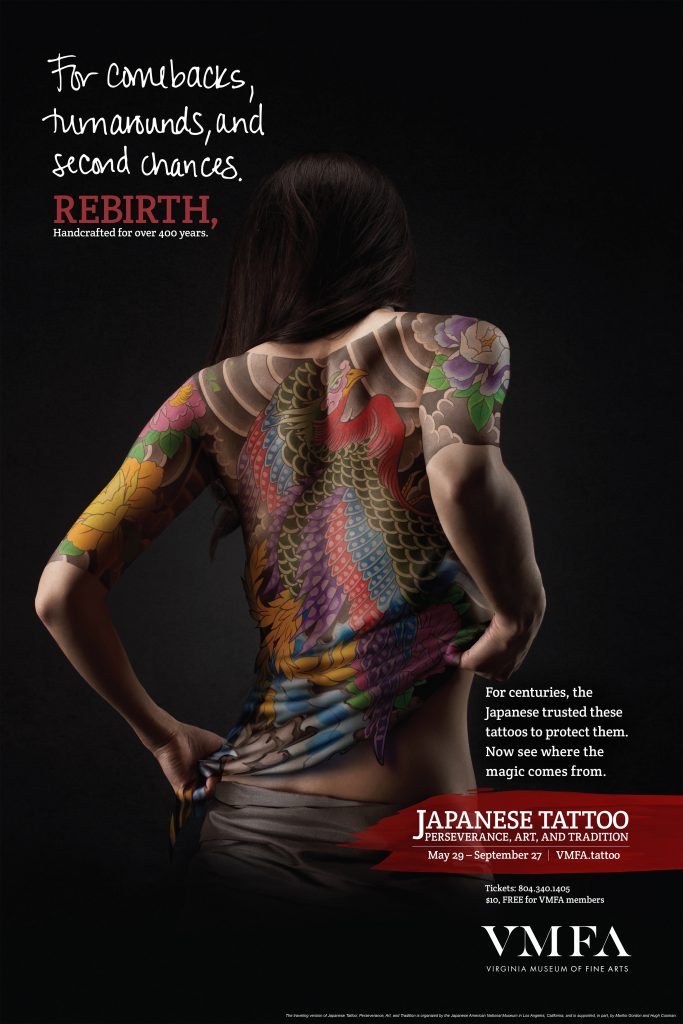 ND&P is launching its campaign for the upcoming tattoo exhibit at the VMFA. Images courtesy of ND&P.

A new exhibit about to open at the Virginia Museum of Fine Arts will mark two firsts for the museum: its initial foray into the art of tattooing and its first collaboration with local ad agency Neathawk, Dubuque & Packett.

The effort has resulted in a marketing campaign that’s as multilayered as the Japanese tattoo art to be displayed in the “Japanese Tattoo: Perseverance, Art, and Tradition” exhibit, which opens May 29.

Drawing inspiration from the art form, ND&P created a campaign that essentially tattoos everyday objects, such as through a mural on a building and tattoo sleeves on coffee cups.

Posters and banners depict models wearing the tattoos as if they were articles of clothing – a nod to their history in Japanese culture as a form of personal identity and spiritual protection.

The campaign will also utilize banner ads on websites, ads to be displayed on city buses and bus stops, posters, social media and stickers and cup sleeves that will be distributed at various coffee shops and other locations around town.

“They have really delivered,” VMFA deputy director Claudia Keenan said of ND&P. “They came to us with a really strong campaign and a really different kind of media plan than we have done in the past.”

The museum is aiming to reach millennials with this exhibit and its advertising.

And Keenan and Greg Zuercher, who supervised the campaign for ND&P, said that demographic makes up much of Richmond’s inked and digital communities.

The campaign includes social media and various digital platforms, including a scavenger hunt on Instagram and QR codes on stickers that link to a video on YouTube of an artist at work. 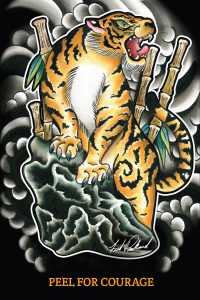 Stickers, designed by Fred Pinckard, will be distributed around town.

Combine that with Richmond’s recent status as one of the country’s most tattooed communities, and the exhibit – on loan from the Japanese American National Museum in Los Angeles – fit the VMFA’s mission, Keenan said.

“One of the things we feel really strong about at the museum is to reflect the community in which we live,” she said. “We know that Richmond has a lot of folks who are either tattoo artists or have tattoos, so we’re excited about reflecting that audience and bringing new folks in.”

Jimmy Ashworth, ND&P’s executive creative director, said the firm’s research found Japanese tattooing stems from firefighters who wore leather armor for protection. The armor was considered a type of good luck charm, he said, and over time, tattoos were seen as an extension of that armor – a layer of what wearers believed to be spiritual protection – as well as a sort of family coat of arms.

Ashworth said the firm spent six or seven months on research, which included focus groups with tattoo artists and wearers.

“We learned a lot about the history and heritage of Japanese tattooing,” he said.

Zuercher said the campaign involved contributions and input from local and national artists.

“Tattoo artists in town with an appreciation for Japanese tattoo did the drawings for us,” he said. “We wanted it to be someone putting on this talisman.”

Keenan said the VMFA spent $125,000 on production costs related to the campaign, such as media buys and advertising materials. Everything else that went into the campaign was done pro bono by ND&P, Keenan said.

“They’re doing all media planning and buying with no commission to the agency,” she said. “That’s unprecedented for us.”

Zuercher and Ashworth said the campaign presented a unique opportunity to work with the museum, which offered the agency its choice of several exhibits.

“We just really felt there must be an interesting creative opportunity here, because it’s a very different subject matter,” Zuercher said. “To think of tattoo as art is not in a lot of people’s vernacular.”

An added twist to the campaign is the Instagram scavenger hunt, which started this week and continues through the exhibition opening. Clues offered online lead to fragments of a mural that a Japanese artist will paint on ND&P’s building at 1 E. Cary St. The mural will be painted the week leading up to the opening, culminating with a street party on May 30.

The exhibit runs through Sept. 27.

As far as I’m concerned ND&P is one of Richmond’s premier PR/ad shops. In addition to a succession of memorably effective campaigns for client VCU (What a difference a day makes), they have provided on a pro bono basis countless hours of support and hands-on help for VA Treatment Center for Children Advisory Council, and perhaps other groups as well. The increasing public understanding of child mental health issues in due in part to them.

Other ad firms in town would do well to match ND&P’s generosity and style.