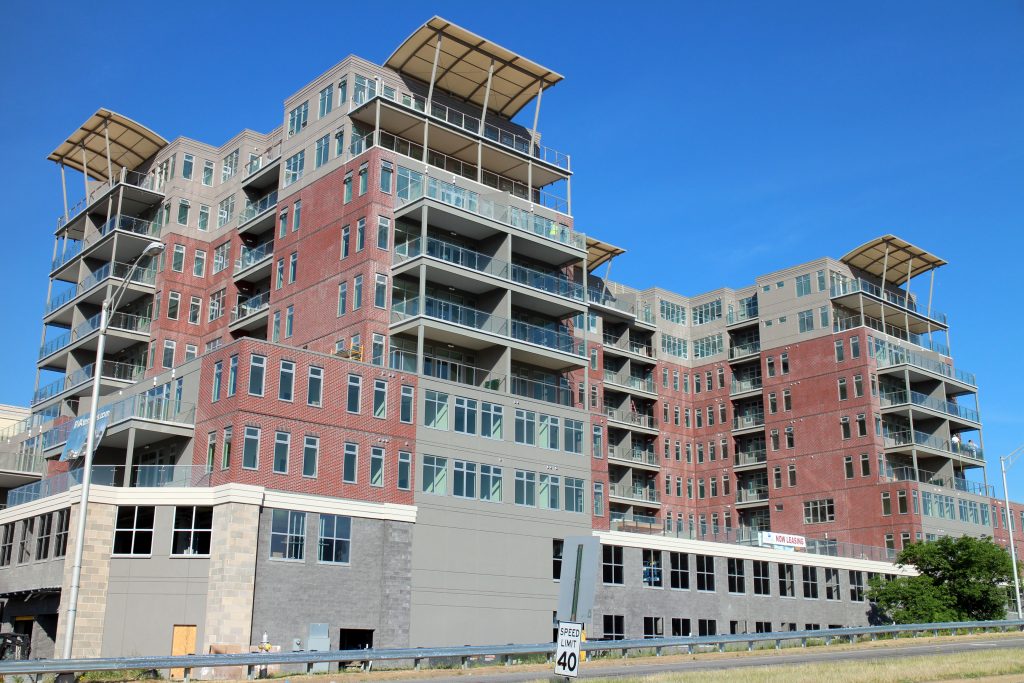 Work is finishing up at the Terraces at Manchester. Photos by Jonathan Spiers.

Manchester’s newest and tallest apartment building is about to open its doors.

Leasing is underway for the Terraces at Manchester, the 10-story building nearing completion at 800 Semmes Ave.

Totaling upwards of 200,000 square feet, the building consists of 148 units with more than 30 different floorplans, two of which were shown off this week at a Commercial Coffee Richmond event hosted by Timmons Group.

Attendees were told of the building’s construction process, which involved paneled walls that were completed off-site and put into place right off the delivery truck. Representatives with builder Purcell Construction said the process shaved about three months from a typical project schedule. 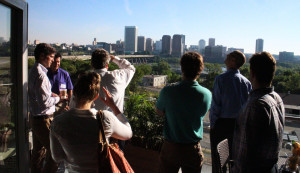 Visitors check out the view from the apartment terraces.

“That also drove the look of the building,” company head Mark Purcell said. “You can see it’s really layered.”

Purcell partnered with veteran downtown developers Robin Miller and Dan Gecker on the project, as it did on the nearby 1200 Semmes apartments. Mark Purcell is a majority owner in 800 Semmes LLC, the development entity behind the Terraces at Manchester. Miller and Gecker are minority owners.

“I think it’s a project needed in Richmond – a signature apartment building unlike any other,” Miller said.

Miller declined to put a value on the Terraces at Manchester, saying some costs for the project remain outstanding. The LLC purchased the property at Semmes Avenue and West Commerce Road in late 2013 for $1.2 million, according to city records. 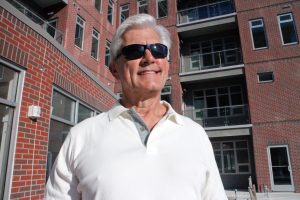 Foundations were laid that November, and construction started last April. The building’s first residents, which will include Purcell, are set to move into their units in July.

The building features 20,000 square feet of private terraces, accessible to nearly every unit. It also features a top-floor “sky lounge” totaling 2,000 square feet, among other amenities.

The apartments add to a residential boom that continues in Manchester.

While residential units in the neighborhood have swelled in number, Miller noted commercial development that is also in the works, including an Urban Farmhouse Market & Cafe and a Subway at 1200 Semmes. He said a coffee shop and a bakery are planned in the area, as well as an El Patron Cantina restaurant in the 1300 block of Hull Street.

This apartment building shows what is possible on the riverfront in Manchester. Purcell, Miller and Gecker took a big risk and it appears to be paying off in a development that will make national apartment industry headlines. They are proving, as have developers Sam McDonald, Genesis, Grubb, Blundon, Thalhimer, Landbridge, Monument, and Fountainhead that Manchester is a place to take some risks and contribute to the growth of the City. And finally, the change is coming over the next 12 months to the blocks of1200-1600 Hull Street which will revive the old downtown. RJ Smith and Spyrock have just joined… Read more »

Hopefully someone will save the (blue) iron clad building next door to 1313 hull street, richmond va.

I believe River Towers or 2000 Riverside is taller.