Plans are moving forward on a mixed-use building in Church Hill. Elevation courtesy of UrbanCore Development.

A local development firm is adding to its holdings in Church Hill.

UrbanCore Development has plans for a new mixed-use building at 320 N. 32nd St. that will bring another retailer or restaurant and three residential units to the neighborhood.

Their latest venture in the neighborhood will sit at North 32nd and East Marshall streets, on a 0.08-acre parcel that the group purchased last year for $36,500, city records show. The city approved the group’s special use permit last week.

The new 4,500-square-foot building will have a 1,600-square-foot commercial space that faces East Marshall Street, with two apartment units above and a town house attached to the back. Development costs will run about $650,000, the company said. 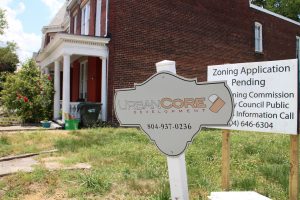 “Making that corner a single-family or duplex didn’t do it justice,” Beach said. “So we thought, hey, let’s try to get the best and highest use out of this corner, and it will make the neighborhood better, support some of our investments in the area, and perpetuate the momentum of retail and commercial space in that area.”

The commercial space could be split for two tenants at 900 square feet and 700 square feet, but Beach said most of the interest they’ve received is for the full 1,600.

“There’s a lot of demand for commercial space in Church Hill,” he said.

Beach said the property has drawn interest from both retail and restaurant tenants.

The work on the building will likely start this summer, and tenants should be able to move in during the spring or early summer of next year.

Architect Todd Dykshorn is designing the project. The developer’s construction arm, UrbanCore Construction, is the general contractor. The owners have not yet finalized how they will finance the work.

The project adds to a full slate of jobs UrbanCore is tackling this year. The developers currently have 2025 Venable St. under construction, where new retailer Roaring Pines should open this summer.

UrbanCore isn’t the only one pushing for growth in Church Hill. Developer Josh Bilder is wrapping up his renovation of the old East End Theater, while moving on to the redevelopment of the 90-year-old Nolde Garage.

And over in North Church Hill, developer Deanna Lewis is bringing a block of row houses and an old general store back to life.

Another of the new wave of young entrepreneurs to enter the Richmond business scene, taking risks to make this City a better place to live, work and play. They have new developments in Scott’s Addition and Church Hill.

Anything to improve church hill, but I don’t understand the architecture choice for thais area. It is reminiscent of the Cedar Broad apartments on broad street in shockoe bottom. I will be glad to see activity on that block but I think most residents would prefer to keep that more modern look in the bottom and have a similar structure with a more traditional facade. I am not typically one for tradition, but the highly ornate craftsmen style details never go out of style and have never been more popular than it is now. I figure it I and is… Read more »