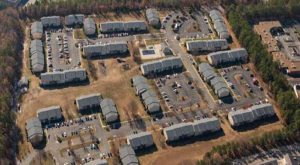 A large apartment complex in Chesterfield County was recently sold by its original owner. Photo courtesy of Ritz Banc Group.

On the same day that a local real estate company snagged its first property in the Lone Star State, an out-of-town firm landed its first Richmond apartment complex with a big price tag attached.

This was Ritz Banc’s first move into the Richmond market, said co-founder and managing director Nasr El Hage Jr. He would not comment on the exact sales price, but said it was close to $30 million. County records have not yet been updated to reflect the sale.

The Huguenot Apartments was purchased as a joint venture with the Texas-based Lincoln Property Co., which will operate the complex. Ritz Banc’s majority limited partner is a Saudi family, one of several with which the firm works. Founded in 2010, Ritz Banc works exclusively with foreign investors.

According to its website, Ritz Banc owns properties largely along the East Coast, with a few in California, Texas and Illinois. El Hage said recent trends have shown a migration from the Northeast into the South.

“So we’re going to be heavily focused on cities like Charlotte, Richmond, of course, Raleigh, Charleston – all those have unique stories to them,” El Hage said.

The apartment complex sits near the intersection of Robious and Huguenot roads.

The Huguenot Apartments sits on 27 acres, and the complex is 95 percent occupied, El Hage said. The seller was an entity called RDBSC LLC. El Hage said the same individual has owned the property since it was built in 1975. The new owners are planning to do interior and exterior renovations.

“When I dug deeper into the market, I was very impressed with the demographics, especially in Chesterfield County, and all the job growth,” he said.

And elsewhere late last month, Richmond-based Weinstein Cos. was busy closing on the purchase of its first Texas property.

It acquired the 396-unit Bexley at Anderson Mill property in northwest Austin for an undisclosed sum. The deal marks Weinstein’s first move away from its primary territory, which company co-president Ivan Jecklin said has traditionally been Virginia and North Carolina.

“We felt like it was important for us to expand our geographic footprint to diversify our risk,” Jecklin said. “Obviously, anytime you pick up a newspaper you read about how great Austin is, and it has all the characteristics we want in a city.”

Austin’s growing economy was a draw for Weinstein, Jecklin said, as was its large population of 18- to 34-year-olds, the typical renting age range.

Bexley at Anderson Mill is more than 95 percent leased and is currently operating well, Jecklin added, so Weinstein has no immediate plans for renovations or improvements.

The 60-year-old company does plan to continue purchasing properties, including another 300-unit complex it hopes to close on in July. After that purchase, Weinstein will own more than 15,000 apartment units in three states. Eventually, Jecklin said, Weinstein may also purchase property in San Antonio, Texas.

Its local holdings include the Kings Crossing apartment complex in Henrico County. It recently sold the 372-unit Ashton Square apartments on the Southside.