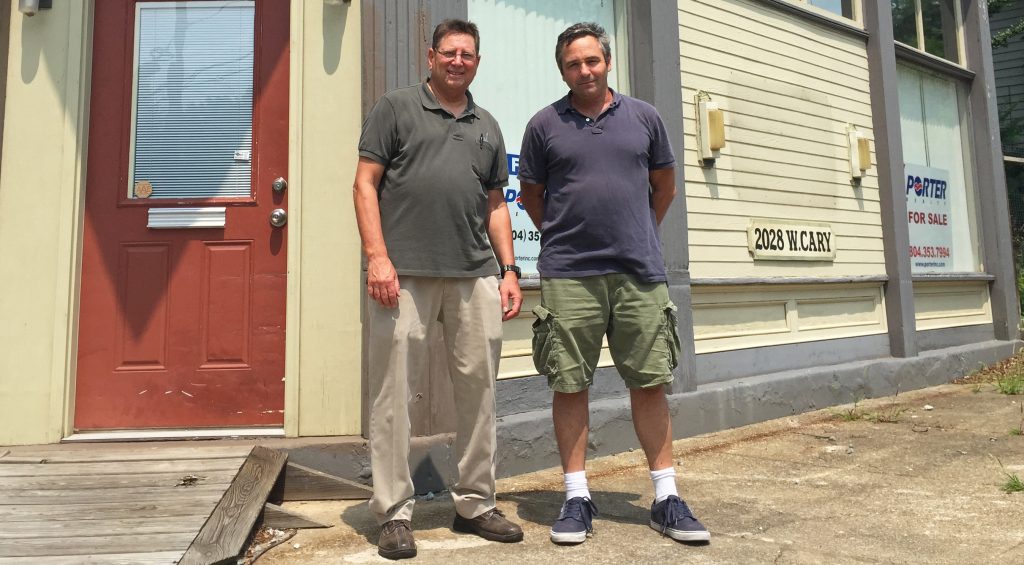 A group of friends turned developers have big plans for an overlooked corner of West Cary Street.

David Levine of Plus Properties has teamed up with A.J. Shriar and Ronnie Shriner to renovate the vacant building at 2028 W. Cary St. and build a new building next to it for a finished product of seven new apartments and a restaurant space.

The project came about unexpectedly, Levine said, when he noticed the property was for sale, made an inquiry, and realized it was zoned not only for residential use, but also for a restaurant.

“I just got chills down my spine,” Levine said. “So I called these guys together, and it was not even a minute-long discussion, we knew we had something going here.” 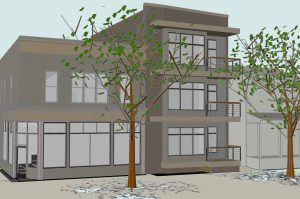 Plans call for a new three-story building dedicated to six apartments and a redeveloped two-story building to hold a restaurant and a single apartment. Courtesy of David Johannas.

The plans include gutting the 3,200-square-foot building that sits at West Cary and Rowland streets and renovating the bottom floor for a 1,500-square foot restaurant space and the second floor for a 1,600-square-foot three-bedroom apartment. Journey’s End Tattoo Studio formerly occupied the space.

“I just can’t believe no one bought it before,” Levine said.

A restaurant tenant has not been selected yet, but Levine said he and his partners are in conversations with some “good, local operators to get advice.”

“We want someone that knows what they’re doing,” Levine said. “We want to be selective.”

The three partners in the venture each have some form of real estate experience. Levine and Shriner both own the buildings occupied by Patterson Express and Belmont Pizzeria at Patterson and Belmont avenues, and Shriar has done some residential real estate work. He also teaches urban and regional planning at VCU.

“I’ve always wanted to get involved in more real estate stuff; that’s one of the reasons I moved to Richmond,” Shriar said. “It seemed like a good place to be.”

The entire project is likely to cost about $1.5 million, which includes the $385,000 they spent to purchase the property on June 1. Wilson Flohr of Porter Realty Co. worked the deal.

David Johannas is designing the project, and EVB is the lender. A general contractor has not yet been selected.

The group said they hope to secure their permits through the city by August or September and start work shortly thereafter. Their tentative completion date should be late spring or early summer of 2016.

I live a block away on Main Street and although I think the project is a good idea, I hope they provide for additional parking. I have been living in the Fan since 1975 and with all the open restaurants in the area those of us that live here are in a constant battle to find a parking space. After a long day at work it is a race to get home to park somewhere even close to where you live. And heaven forbid you have to go out at night because you can never park when you get back.… Read more »