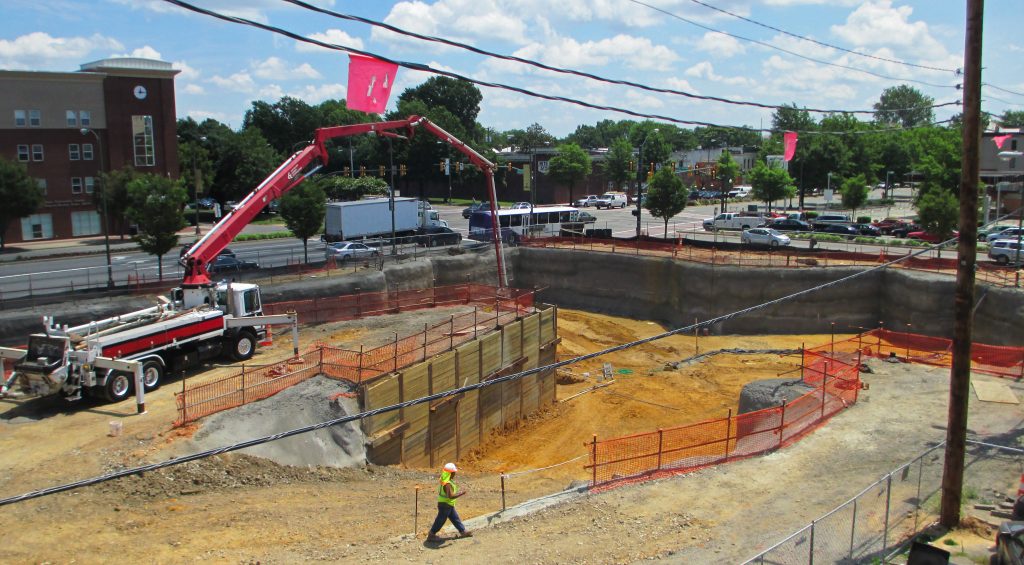 Construction on a massive VCU project was recently stalled. Photo by Jonathan Spiers.

The big hole at Broad and Belvidere is showing signs of life.

Activity has returned to the site of Virginia Commonwealth University’s future Institute for Contemporary Art, a 43,000-square-foot building under construction at West Broad and Belvidere streets.

The $35 million project appeared stagnant in recent months, with little activity on the site until a week ago.

The delay was due to issues with design and construction plans that emerged since the project got underway last summer, said Leila Ugincius, a VCU spokeswoman.

“It is quite normal for a project of this size and nature – it is an unusual building – for changes in the design and technical requirements as the project gets closer to construction,” Ugincius said in an email.

“This project is large and complicated, so the project had been delayed for a thorough re-evaluation of the design and construction plans,” she said. “The re-evaluation is at a place where the parties felt confident to begin work on the foundation.”

Ugincius said the delay and design changes would impact construction and associated costs. She said those costs and their implications are not yet known.

As for the project schedule, Ugincius said it is being reviewed but that targets remain in place for completion by the end of 2016 and an opening in 2017.

Gilbane Building Co. is heading up construction on the 1-acre site, which was donated to the school in 2014 through the VCU Real Estate Foundation. The school has since acquired additional real estate in the area, including an adjacent apartment building on West Grace Street and the former Hess gas station across Belvidere.

When ground was broken on the ICA site last June, about $31 million of the $35 million needed for construction had been raised, primarily through private donations and a $4.4 million contribution by VCU. A year later, that goal remains $1.7 million short, with $33.3 million raised as of Friday.

Once completed, the facility, formally called the Markel Center at the VCU Institute for Contemporary Art, will serve as a non-collecting museum and host exhibitions, performances and other programs.

You can watch a live feed of the building’s progress at the bottom of this webpage.