Richmond’s taxi drivers have a hoard of new competitors.

More than 1,200 vehicles in the city of Richmond, Chesterfield County and Henrico County signed on with the Virginia Department of Motor Vehicles to be formally allowed to pick up passengers for Uber, as of the July 1 deadline for registrations.

That’s more than double the traditional taxi vehicles that are active on the road in those localities. And the figures statewide show a similar trend of outnumbering, with more than 23,000 cars in Virginia registering for DMV’s new transportation network companies (TNC) designation since registration opened in February. There are more than 5,000 traditional taxis registered in the state.

Companies like Uber and Lyft let people use their own cars to sell rides to passengers through a smartphone application.

Uber and Lyft entered the Virginia transportation market last year with a degree of controversy. The San Francisco-based companies operated in the state in spite of the DMV sending cease-and-desist letters and levying fines against them. Uber and Lyft and Virginia eventually reached a temporary agreement to let the companies operate legally. 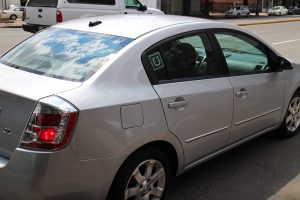 Uber drivers use their personal cars – marked with a small window sticker. Photos by Michael Thompson.

That led to new state legislation, signed into law earlier this year, which created regulations for Uber and Lyft under the TNC designation. The new rules require TNCs to ensure all drivers are at least 21 years old and properly licensed to drive. They also have to do background checks, among other things. And according to the law, TNC vehicles must be insured.

It costs $100,000 for a company to get registered as a TNC and $60,000 to renew the registration each year. DMV spokeswoman Brandy Brubaker said Rasier, an Uber subsidiary, and Lyft are the only companies that have applied and been given the certification.

Most of the TNC registrations were done by the companies on behalf of their drivers. Drivers can be registered through both Uber and Lyft. Individuals don’t have to pay to register.

As of July 1, the city of Richmond has 357 registered TNC drivers and 76 registered taxis. Chesterfield has 314 TNCs and 109 taxis, and Henrico has 539 TNCs and 295 taxis, according to DMV figures.

The number of drivers operating through Uber and Lyft is higher than the DMV initially expected, Brubaker said. In the lead-up to establishing new rules for the services, she said, the DMV estimated that 5,900 drivers would register to be able to pick up passengers – about 17,000 short of the actual number statewide.

“We made a rough estimate,” Brubaker said. “We just took it based on the number of taxicabs.”

Brubaker said the DMV was prepared for the higher number of actual TNC registrations, but the same may not be said for some local taxi companies. 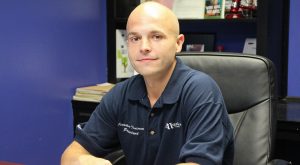 “These entities flooding the market create instability in any profession that relates to public transportation,” Trainum said. “Now, (traditional taxi companies) are fighting for our futures.”

Trainum said he is the Henrico County representative for the Capital Regional Taxicab Advisory Board, which handles taxicab regulation in Central Virginia. Trainum said the number of taxi companies operating in the Richmond area has dwindled since he launched Napoleon in 2007.

Trainum said despite the changes in the industry, traditional taxis can compete on service and access for customers that don’t have the apps necessary to hail an Uber or Lyft car.

“We have relationships with all demographics here – not just the one with smartphones,” Trainum said. “We’ll never be a Walmart, but we have a place.”

Lyft spokeswoman Chelsea Wilson said in an email the company has contributed to increasing safety for passengers in the transportation industry. Lyft operates in Virginia but hasn’t yet come to Richmond.

“We should seize this moment of change in the transportation industry to reject business as usual and establish the innovations brought by Lyft and other ridesharing services as a new standard of safety for all providers,” Wilson said.

Trainum also called for a cap on surge pricing, which is the practice of tying the cost of rides to demand. Traditional cabs have their prices set by localities. In the Richmond region, it costs $2.50 to enter a cab and then $2.50 per mile. Uber’s budget ride option, uberX, has a base fare of $1.25 and then costs 18 cents per minute and $1.05 per mile, but the fare rate can more than double at the busiest times.

Trainum said he would like to see restrictions on traditional taxis eased but also said companies need to be able to adapt to the new market.

“Taxi companies have a lot of stepping up to do,” Trainum said. “The ones that are here for the community will be here for a long time.”