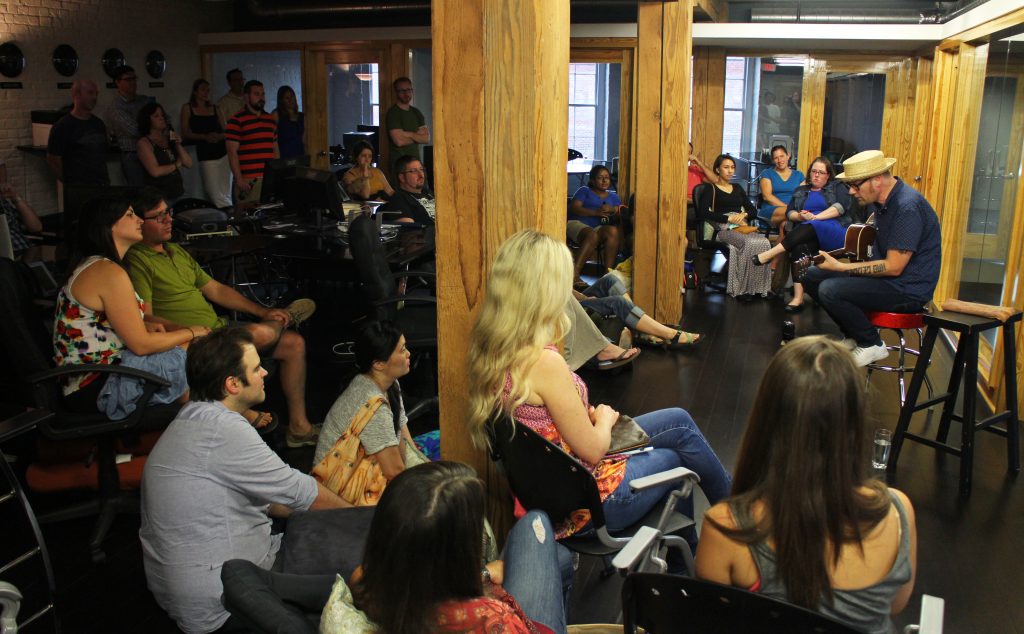 A local market research firm tested a different type of audience at its offices this week.

A crowd of about 50 crammed the workspace of Feedback, a music-inspired research company headquartered at 1401 E. Cary St. in Shockoe Bottom. The occasion was a live performance by singer-songwriter Mike Doughty, formerly the frontman of alt-rock act Soul Coughing.

Armed only with an acoustic guitar and a wry sense of humor, Doughty entertained with a two-hour set that included occasional storytelling and question-and-answer sessions. The audience was a mix of diehard Doughty fans and Feedback staff.

Falling under both categories was Dean Browell, Feedback’s executive vice president, who arranged the concert as part of Doughty’s Living Room Tour, consisting primarily of events at people’s houses.

Browell said he learned through Doughty’s email list that he was searching for a venue in Richmond. A longtime fan, Browell jumped at the opportunity – not just for an in-house concert, but also to help in his company’s efforts to reach out to fellow music fans and the Richmond business community.

“We’ve kind of been under the radar in Richmond,” Browell said. “We want to reconnect with the area here. And we really want to get back into playing up all of our love of music. It was why we named the company Feedback.”

Launched in 2009, Feedback booked The Martin Agency as its first client, but Browell said its Richmond-based clients have been few compared to the national and international companies it has served.

Feedback provides clients with research and insight into their audiences that they can use to better understand their potential customers or solve challenges before developing a public outreach plan.

The company moved downtown from Midlothian 1½ years ago. It also has offices in New York, London and Paris and has a presence in Singapore.

Feedback plans to begin sending a monthly newsletter and holding regular jam sessions it is calling “The Listeners.”

Targeting communication professionals, particularly in Richmond, the newsletters will begin next month and will include insights on audiences and market research, Browell said. The jam sessions at its offices will be an in-person extension of that, inviting members of the local business community and others to come play.

“There are so many people in the advertising-PR industry here who are all musicians,” he said. “Every show we go to seems to include one-quarter of some advertising scene.

“Even if it’s people from different industries, it’s the idea of: Let’s come listen to each other.”