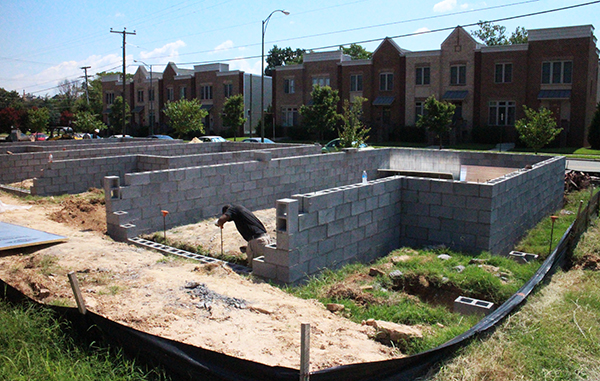 Foundations for the final batch of homes in the TriBeCa project are taking shape. Photos by Jonathan Spiers.

Work is underway on the second half of what’s envisioned to be a gateway for Richmond’s Randolph community.

Foundations for the third and final phase of TriBeCa, a 23-unit townhome development just south of VCU whose name is an acronym for “Triangle Below Cary Street,” are being built along South Harrison Street, across from the project’s two completed phases.

Construction began at the start of this month and is expected to wrap up by mid-March, said Dave Johannas, the architect and one of two developers on the project.

Two rows of attached homes have been built on the east side of Harrison, just south of the triangle that inspired TriBeCa’s name – a vacant piece of land bordered by Harrison and Grayland and Idlewood avenues.

The first phase along Harrison was completed seven years ago, while a second cluster of homes on the Dobson Street side of the block wrapped up earlier this summer. The third phase will add a row of nine detached homes along the west side of Harrison, between Idlewood and Wallace Street. 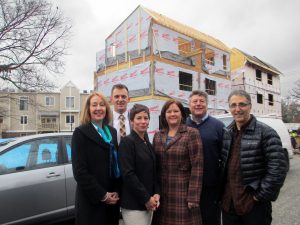 Construction costs on the final section are projected at about $1.5 million, Johannas said. The second and third phases together ran about $2.2 million. Financing is being provided by First Capital Bank. KBS is the builder and general contractor.

Johannas partnered on TriBeCa with Tom Rosman, a broker with One South Realty Group. The duo, operating through Pyramid Richmond Properties, zeroed in on the property about a decade ago with the idea of creating a gateway for Randolph, a community on the south side of the Downtown Expressway between Maymont and Hollywood Cemetery.

Two of the nine new homes will be limited to buyers whose incomes are 80 percent or less of the median area income. While low-income housing projects often involve some form of tax credit, TriBeCa is not part of a tax credit program. Johannas has said the company would direct qualified buyers to available grants for down payments.

Johannas said nearly all of the units in TriBeCa’s second phase sold within days of the project’s completion. The last remaining unit in the phase closed more recently, bringing TriBeCa’s completed inventory to full occupancy.

“I think we’ve got a good mix of people out there, so we’re pretty happy that way,” Johannas said Friday. “And we’re happy with the response to pricing … Hopefully we’ll get the same reaction in the next phase.”

Congratulations to Tom and David for proving once again that new for sale housing is desirable in the city. Next up, Nolde’s towns at the B&G Club site in the Fan and Miller’s Manchester Green.

RBS has much better business coverage than RTD. Keep up the good work.