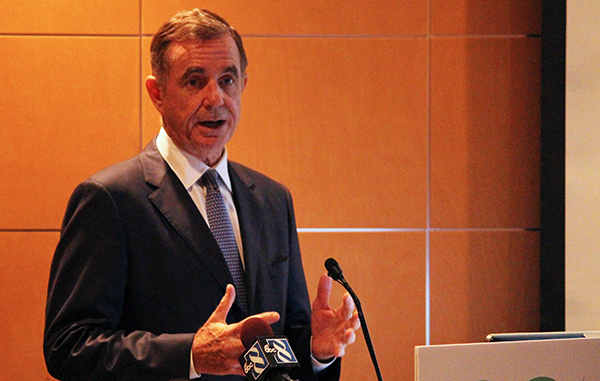 Like the thimble on a Monopoly board, Virginia is looking to collect by passing “GO.”

A new economic development campaign called “GO Virginia” was announced Tuesday in a series of press conferences held throughout the state. The initiative, formally called the “Virginia Initiative for Growth & Opportunity in Each Region,” aims to encourage growth in the private sector through incentives from the state and cooperation among every region.

The initiative is being launched by the Virginia Business Higher Education Council and the Council on Virginia’s Future. Tom Farrell, CEO of Dominion Resources, led the event as a member of VBHEC’s board of directors, which also includes Owens & Minor Chairman Emeritus Gilmer Minor and UVA President Teresa Sullivan.

State leaders who spoke at the press conference in Richmond, held at the downtown Virginia BioTechnology Research Park, said the state has become too reliant on federal funding and Department of Defense jobs that disappeared due to federal budget sequestration. 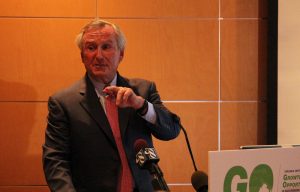 Speakers noted Virginia’s ranking as 48th in the country in gross domestic product growth, according to recent statistics from the U.S. Department of Commerce.

“We’re not accustomed to that in Virginia,” said John “Dubby” Wynne, former CEO of Norfolk-based Landmark Communications and a VBHEC board member, whom Farrell said was a catalyst for the campaign. “We were shocked in the last couple of years to see the ranking we had across the country in terms of our rate of growth.”

“Doing things the same way – as we know, the definition of insanity – and hoping for a different result, that’s not going to work,” Wynne said. “We’re wholly dependent on public sector and government contracted jobs. We’re going to do everything we can to strengthen those sectors, because they’re really critical to us, but we all now know that we must have private-sector growth and we must have diversification in our jobs.”

To that end, the campaign aims to work with the governor and General Assembly to develop incentives and secure funding in the next state budget that would be used to encourage regional collaboration and participation from localities and individual businesses. The group did not provide specific numbers at Tuesday’s press conference.

Those incentives would include, among other approaches: grant support for startups; financial incentives for cost-saving collaborations between local governments, schools and higher education institutions; matching-fund support for labs and research facilities; and state investment in capital projects that would result in strong private-sector growth.

Speakers on Tuesday emphasized GO Virginia would not involve new taxes, additional layers of government or local mandates. Funding for such incentives would come from “growth revenues, repurposed dollars and efficiency savings,” according to campaign literature. 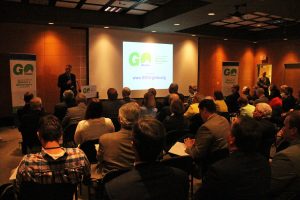 Gov. Terry McAuliffe, one of several elected officials in attendance Tuesday, emphasized a need for regional collaboration, also contending that the state had become too reliant on public sector jobs. A video shown at the event said 13 of the state’s top 20 employers are in the public sector.

McAuliffe noted Virginia’s status as “the number-one recipient” of Department of Defense dollars, and he said the state has lost $9.8 billion in Defense funding since 2010.

“I think in the past, and I don’t mean this disrespectfully, with those large amounts of defense money that just came into Virginia – the number-one recipient – maybe we didn’t hustle as hard as we should have been for other industries and business,” McAuliffe said. “The economy of Virginia of old is gone. It’s a new economy.”

Speakers noted the plan would need legislative approval through a combination of budgetary and statutory provisions. They said the coalition would be working with McAuliffe and state legislators to develop proposals to present next year’s General Assembly session.

Among business organizations represented on Tuesday were the Virginia Chamber of Commerce, the National Federation of Independent Businesses, Virginia Free, the Northern Virginia Technology Council and the Virginia Economic Development Partnership.

“The turnout of these many respected leaders who are working to strengthen the commonwealth’s economy and create jobs, I think, reflects the importance of the initiative,” Farrell said.

Editor’s note: This article was changed to identify Del. Kirk Cox as House majority leader. He was incorrectly identified in a previous version.

Great article, but Kirk Cox is the Majority Leader in the House of Delegates, not Senate