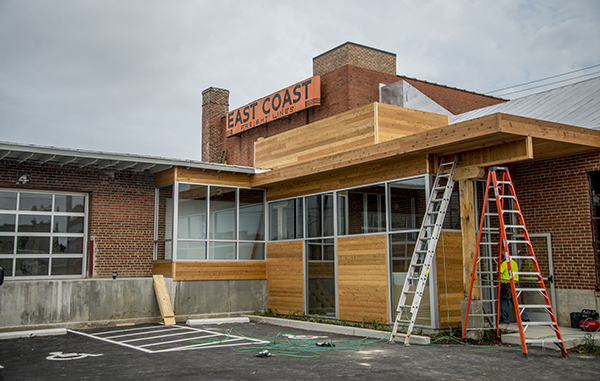 The building at 3005 W. Marshall St. is being converted into office space. Photo courtesy of The Frontier Project.

A downtown consulting firm is headed for a neighborhood that’s become a new frontier for Richmond office space.

The Frontier Project is the latest local company to relocate to Scott’s Addition, with plans to move next month into a former freight warehouse at 3005 W. Marshall St.

The company, which provides consulting and business training, has leased the 13,000-square-foot building that is under renovation.

Its 35 employees currently operate out of Gather, a shared office space at 409 E. Main St. downtown. Scott Wayne launched the company in 2007 and for a time worked out of 5,500 square feet at 2006 E. Franklin St. in Shockoe Bottom. Wayne’s wife, Ryann Lofchie Wayne, is the company’s CEO.

Ty Toepke, Frontier Project’s chief growth officer, said the company searched for more than a year to find a bigger space that met its needs. It was looking for room to host client retreats and training sessions, along with the parking to handle such events. The company also wanted a nontraditional setting that reflected what it says is its nontraditional approach. 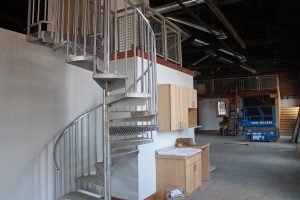 “(It) made for bit of a unicorn,” Toepke said. “We were really focused on finding a space inside the city.”

The company’s new building is owned by Thomas Hamilton & Associates, which bought the property in April and designed the renovations. Exposed brick, concrete floors, an old scale, and garage doors suggest the building’s previous use: It was built in 1940 for East Coast Freight Lines.

Scott Coleman with Crossroads Development is the general contractor for the site. More than $500,000 in building permits has been issued for the property since April, according to city records.

Toepke said the rise in popularity of Scott’s Addition was an incidental bonus to the new space. Other offices that have moved or are moving to the neighborhood include a second Gather location, architecture and design firm Tait Saunders Mulvaney, and Monument Consulting.

“It’s not just for breweries anymore,” Toepke said. “Not that there’s anything wrong with breweries – we’re very excited about that.”