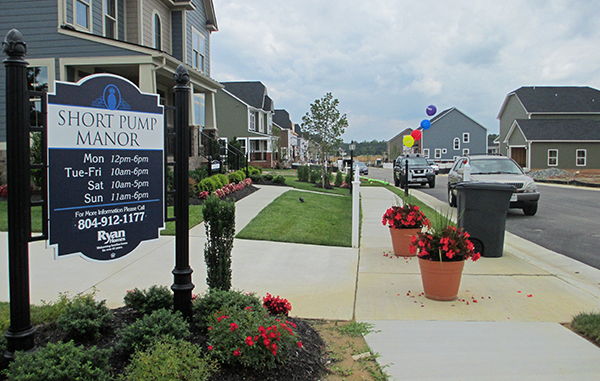 A batch of new homes in Short Pump is set to be finished by this fall. Photos by Jonathan Spiers.

Houses rising in Short Pump along Pouncey Tract Road are signaling the next phase of what is planned to be a significantly larger residential development.

Construction is underway on the second section of Short Pump Manor, a subdivision planned to comprise 95 homes on 27 acres at 4660 Pouncey Tract Road.

Short Pump Manor is located on the west side of Pouncey Tract Road, just across Interstate 64 from Short Pump Town Center. It’s part of a larger planned community called Bacova, which is slated to consist of 300 to 400 homes and some office spaces between Pouncey Tract and North Gayton roads.

Plans call for no two neighboring homes to have the same facades. Renderings via Henrico County.

Developed by Robert Babcock, the subdivision features houses ranging from 1,800 to 2,500 square feet in size, with upgrade options to reach upwards of 5,000 square feet. Ryan Homes is the builder and is marketing the homes starting from the upper $440,000s to the upper $590,000s.

A plan of development approved in 2013 called for the 1,800- to 2,500-square-foot minimum size. Ryan Homes’ website for Short Pump Manor states each home can have up to six bedrooms and 6½ bathrooms with finished basements and garages.

Totaling about 140 acres, Bacova received initial zoning in 2011 for office uses, up to 135 single-family homes, 45 zero-lot-line dwellings and more than 400 apartments. In 2012, Hampton Roads developer The Breeden Co. began work on the apartments, called Marshall Springs at Gayton West: 420 units on a 30-acre site that Babcock sold to the company for $8.72 million.

Bacova is currently zoned for as many as 275 homes – 95 in Short Pump Manor. Construction on that subdivision began last August, and the second section currently underway is set to be completed early this fall.

Ryan Homes isn’t the only builder involved in Bacova. In 2014, Reston-based Stanley Martin Homes acquired another section, called Liesfeld Farm at Bacova, as well as The Reserve at Pouncey Tract development to the north. Liesfeld Farm was planned to consist of 67 houses, each of them at least 3,000 square feet in size and priced starting in the $500,000s.

Stanley Martin is also developing about 16 acres at North Gayton and Kain roads for a 26-home neighborhood called Wellwood. It purchased that land earlier this year for $3.7 million.

When is someone going to do a journalistic piece on how much development in Short Pump is too much?
Traffic, backups on I-64 now. What is happening to the quality of life there?