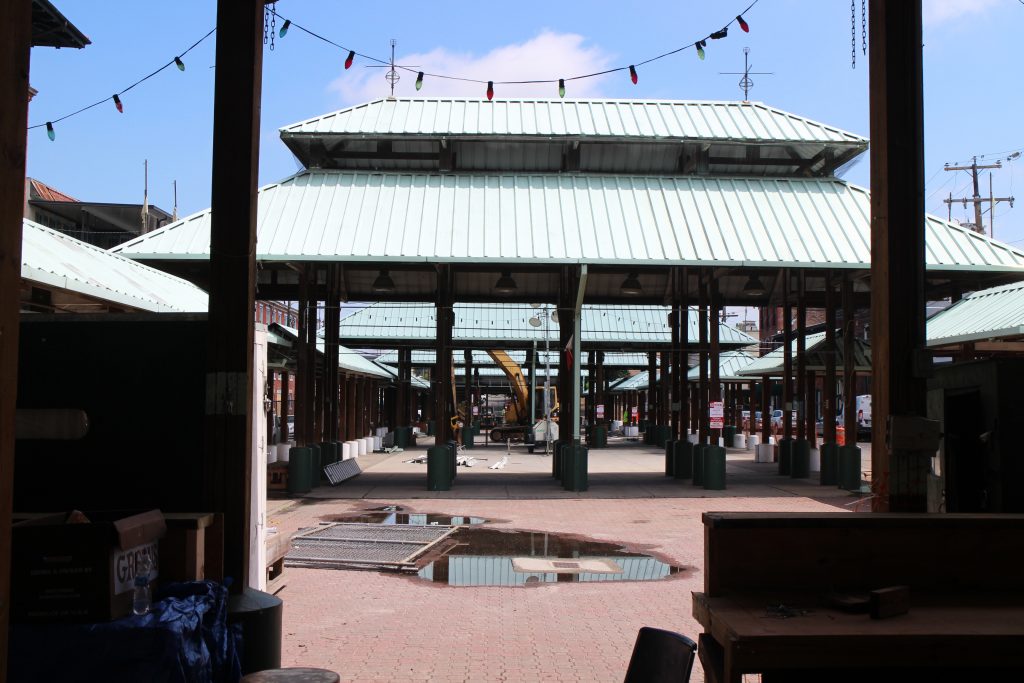 Work has started on the 17th Street Farmers’ Market. Photos by Michael Thompson.

The makeover of one of Richmond’s oldest public markets has begun.

Demolition commenced this week on the 17th Street Farmers’ Market in Shockoe Bottom.

The first phase of the work, which is being funded by the city, calls for removing most of the market’s green sheds. It’s the initial step in a larger plan to expand the market and make it more open.

Tammy Hawley, spokeswoman for Mayor Dwight Jones’ office, said the first phase of work will cost $88,000. Pryor Hauling was hired by the city’s Department of Economic and Community Development to do the work.

No streets will be closed during this phase of the process, which is expected to last two to four weeks. The sheds are planned to be repurposed by Enrichmond, a local nonprofit.

Plans call for the removal of the green awnings over the market. Rendering courtesy of the city.

Produce vendors will be allowed to continue selling on the Main Street side of the market. The space is used for events, and RVA Brew-BQ, scheduled for Aug. 16 at the market, is still on.

Plans for the 17th Street Farmers’ Market were shaped by recommendations made by the Shockoe Bottom Revitalization Strategy, which the city commissioned in 2010. The land the market sits on is owned by the Parks, Recreation and Community Facilities Department.

A history of the market site on the city’s website says “the 17th Street Farmers’ market has been a public gathering place since 1737, and is one of America’s oldest public markets.”

The next phase of the revitalization will include a call for proposals to manage, operate and brand the market.

Correction: A previous version of this story incorrectly listed the date of the RVA Brew-BQ event as Aug. 17. It will be held Aug. 16.

An open-air market that’s enclosed and away from the weather would be a great attraction. There are some great public markets in Baltimore that could be used as a model…I think a road trip to Cross Street Market or Lexington Market would be great for you. Catch up with your mom, if she’s still in the area.