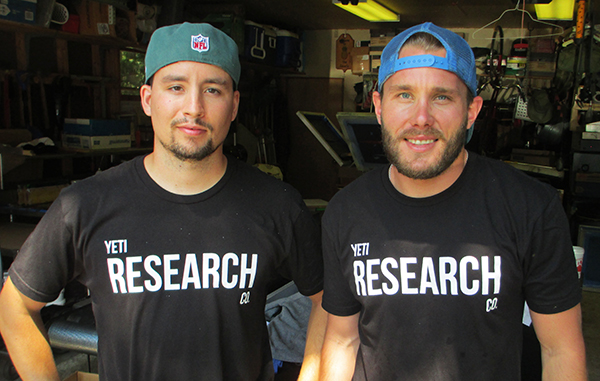 What started on the slopes as a joke among friends has snowballed into a new local business whose name, at first glance, might be deceiving.

Blaine Teets and Nick Lowe, former schoolmates at Hermitage High School, are launching Yeti Research Co./Bigfoot Research Group, a venture that sounds like a collective of Sasquatch seekers but is in fact a new clothing line inspired by a group of snowboarder friends’ nickname for themselves on the slopes.

“We always joked about the Yeti living in the mountains and the whole persona of the Sasquatch. Joking around, we call ourselves the ‘Yeti Research Team,’” Teets said.

An agent with Ashcraft Insurance Agency and a graduate of Radford University’s College of Business and Economics, Teets said the idea for the line resulted from an outing in which they sported the name on shirts that Lowe made.

Lowe has been designing and printing custom shirts for five years through his brand Backyard Tees, which he currently operates out of a garage in Glen Allen. When the longtime friends wore their shirts on the slopes, they turned heads, Teets said. 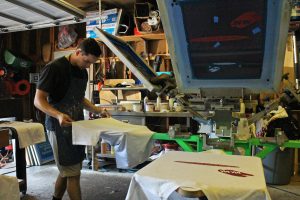 Nick Lowe preps a shirt on the company’s press.

“People started asking about it. We were like, ‘I think the name is good enough, and I think we can go somewhere with this,’” Teets said.

Teets and Lowe recently secured their business license in Henrico County and are planning to launch the line through an online store in late September. A website is staged and will begin accepting pre-orders by Sept. 1, Teets said. In the meantime, he and Lowe are preparing their inventory and printing their designs in the garage, with plans to set up a more permanent shop soon.

Teets describes the concept as a search for something that’s never really found: a perfect ride on a snowboard, or a debated mythical creature.

Teets said he has spent several months hyping the brand on social media and developing a following on platforms such as Facebook and Instagram. The 30-year-old said those efforts have attracted some stores interested in carrying the brand, as well as interest from a snowboarder in Canada seeking a potential sponsorship.

“We’re already getting talked about at a store in Flagstaff (Arizona) that wants to put our stuff in there, and there’s another one in Salt Lake City – strictly off our designs,” he said. “It’s just amazing what you can do socially and all that you can do online.”

Should the Yeti winter apparel line prove successful, Teets said the plan is to follow it up next year with the warmer-weather Bigfoot Research Group apparel. 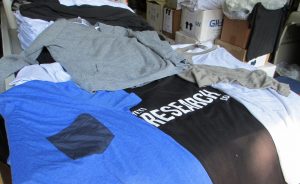 The company makes a variety of shirts in different styles for men and women, along with other clothing and accessories.

In addition to shirts and sweatshirts, each of which feature variations on the logo – the name combined with images of mountaintops, pickaxes and other designs – Teets said the Yeti line would also include accessories such as ski caps, face masks and goggles. Most items would range in price from $20-$40.

“Our goal is to have good-looking material that’s functional on the mountain,” Lowe said.

For Lowe, who started Backyard Tees in 2010, the venture is a chance to branch out as a designer.

“This has been my dream for a long time, to have my own brand I designed and be proud of it. But I couldn’t do it on my own,” the 29-year-old said.

Teets did not want to discuss costs related to starting up the business, which he said he is paying for out of his own pocket. By working out of the garage and doing their own marketing, he said they’re able to keep costs low, which in turn allows them to afford higher-quality apparel and provide such perks as free shipping on orders.

He said they hope to grow the brand but are also happy if it just covers the costs of their snowboarding trips. He said they’re not looking for financing from banks but would entertain the right investor.

“I’m not being cavalier about it, but I think we’re going to do this thing ourselves,” Teets said.
“I put down this money, and our plan is to get back profit by spring, at least.”

Lowe said they are working with a number of suppliers and are looking to add more. Current suppliers include S&S Activewear and Atlantic Coast Cotton. Teets added that they’re working with local companies, as well, including Acorn Sales Co. for packaging and mailing supplies.

“Our projections are really high, and the feedback we’re getting from people – I think we’re onto something here,” Teets said. “I’m not being naive here. We’ve done a lot of research, no pun intended.”

I assume these folks are aware of the Yeti line of beverage coolers – they also make apparel.

awesome write up Jon! Nothing like a good local home grown story… Definitely will be stocking up on their apparel for the winter!