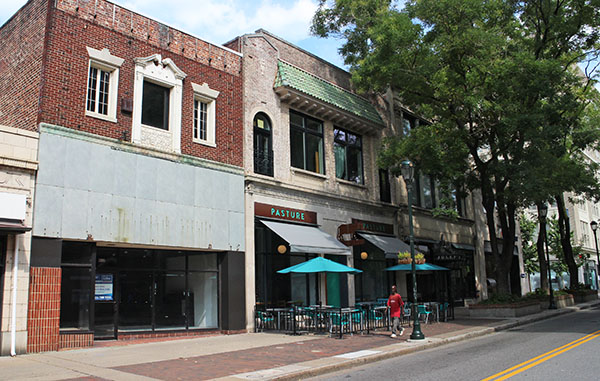 A vacant building next to Pasture is set to be revamped. Photo by Katie Demeria.

A local developer and restauranteur are gobbling up more real estate along an ever-evolving downtown restaurant row.

Chris Johnson and Tom Dickey of the Monument Cos., along with Chris Tsui of Eat Restaurant Partners, recently purchased 412 E. Grace St. with plans to renovate the building to add a new 3,800-square-foot street-level restaurant and two apartments on the second floor.

The trio is rekindling their partnership after working together in the development of Foo Dog on Main Street, another of Tsui’s restaurants, Johnson said in an email.

“We really enjoyed working with Chris (Tsui) on (Foo Dog), and we knew he was expanding and preferred to have an ownership in the buildings where he puts his restaurants,” Johnson said. “This building laid out well for a good sized restaurant on the first floor and mezzanine with apartments above, so we thought Chris might have an interest – which he did.”

The partners put the 6,100-square-foot building under contract about four months ago, Johnson said. They closed on the deal Tuesday, paying $420,000. Johnson said the building has been vacant for quite some time. Property records indicate that the seller owned the building since 1989. 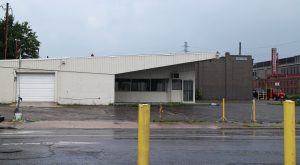 Eat Restaurant Partners is also working up a new concept on Boulevard. Photo by Michael Thompson.

Tsui did not return a call and email by press time, and Johnson said Tsui is not yet disclosing the concept for his new restaurant.

While all three partners own the building together, neither Johnson nor Dickey has an ownership interest in the restaurant. In addition to Foo Dog, Tsui’s Eat Restaurant Partners owns Fat Dragon, Blue Goat, Osaka and Wild Ginger. And he has plans to open another spot on North Boulevard in Scott’s Addition.

The Monument Cos. construction arm, Monument Construction, is the general contractor on the new building. Scott Fowler with Fowler Architecture is designing the project.

The entire building needs to be renovated, Johnson said, but its historic features will remain intact as the group pursues historic tax credits. Minor work should start immediately, but heavy construction will begin as soon as the UCI Road World Championships bike race ends on Sept. 27.

Johnson said the work should wrap up by late winter or early spring of next year.

Johnson said the cost of the entire project has not yet been finalized. The group used C&F Bank as its lender.

The 412 E. Grace St. spot will be Tsui’s first downtown location, but it will not be Johnson and Dickey’s first venture into that stretch of the city. The pair also worked with Julep’s owner Amy Ayers when the restaurant moved into 420 E. Grace St., two doors down from their new building.

“(It’s) a great walkable block for people in the area, and a destination spot for people who do not live downtown,” he said in the email. “The entire Midtown/Broad street area is on a tremendous upswing.”

Other pending recent arrivals in the East Grace Street food scene include the forthcoming Pop’s Market at 417 E. Grace St., Lucca Enoteca Pizzeria at 525 E. Grace St., and the recently opened Kohlmann’s Market, owned by the group behind Perly’s Restaurant and Delicatessen.

Meanwhile, the Monument Cos. and the Edison Co. are continuing work on the renovation of the historic Signet Bank building at 7 N. Eighth St.