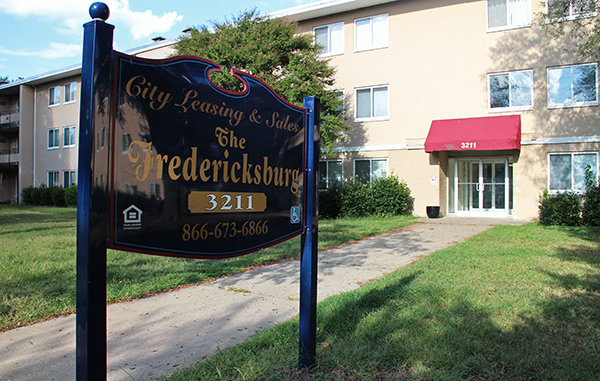 The Fredericksburg apartment complex was one piece of a portfolio that recently changed hands. Photos by Katie Demeria.

A chunk of the Northside apartment market has been snatched up by a New York-based private equity firm.

It bought the properties through three separate transactions, all of which closed on Aug. 26.

Broker Chris Chadwick of Marcus & Millichap represented the seller in the largest of the three deals, which comprised nine buildings with 212 units at a combined price of $7.5 million.

Chadwick said neither the new owner nor the seller, Kings Crest LLC, wished to comment on the deal. City and state records gave no further detail as to the people behind Cedar Grove Partners.

Chadwick said these three deals were the buyer’s first move into the Richmond market.

“The buyers saw a lot of opportunity, especially the proximity to downtown,” he said. “I think it was a good value for them, they were able to purchase it at an attractive yield, and the seller was also able to get a good amount of value from it. Everybody walked away happy.” 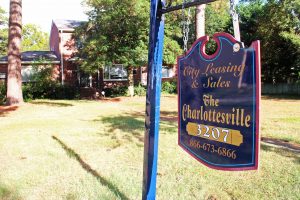 The Charlottesville was part of the largest nine-complex deal.

The portfolio that Chadwick had listed had been on the market for a little over a month, he said, and includes The Alexandria at 3006 Chamberlayne Ave, The Charlottesville at 3207 Chamberlayne Ave., and The Fredericksburg at 3211 Chamberylane Ave.

“We gave a lot of tours for this,” Chadwick said. “Being a scattered site portfolio, it was definitely a niche buyer who was able to look at it as an opportunity to acquire more critical mass.”

Those nine buildings were about 93 percent occupied at the time of closing. They sit on about 5 acres and consist of one-, two- and three-bedroom units.

Cedar Grove Partners’ second deal came in at $1.67 million for three properties at 4218, 4214 and 4300 Chamberlayne Ave. They have more than 40 units combined, according to city records. The seller was Las Vegas-based Voyager Partners LLC.

The third deal was the $1.32 million purchase of the Abbey Square and Northside apartment buildings, made up of more than 50 units. The seller was California-based MWTG LLC.

Neither Voyager Partners nor MWTG own additional properties in Richmond, city records show.

Chadwick said growth in Richmond attracted Cedar Grove to the area, and he expects the company to hold onto its new assets for several years after doing some upgrades.

“If the market conditions are what are predicted, I’d expect them to hold onto the properties, add value, and then sell them maybe within 10 years,” he said.

That strip has had a checkered history of management over the years, and the tenant mix has suffered for it. Let’s hope that these new buyers will bring these properties up in value to complement the beautiful neighborhoods on either side of Chamber layne Ave. It’s been a good investment for those who cared for the residents and the buildings, a bad one for who neglected the properties and milked the of the rents.