A developer has signed on half of the tenants in Stuart’s Crossing’s first building. Images courtesy of Sauer Properties.

With its first three tenants signed on, work is set to begin on a Henrico County project that’s 10 years in the making.

Sauer Properties will start construction this month on the first piece of its 175,000-square-foot Stuart’s Crossing Shopping Center at Route 1 and Virginia Center Parkway.

The company, which is the real estate arm of Richmond-based spice company C.F. Sauer, purchased the center’s 13 acres in 2002 for $4.5 million, county records show. Sauer Properties spokesman Shane Parr said the project took a while to take hold, because the land had to be rezoned and the company was simply taking its time.

“It’s like training for a marathon, and race day is finally here,” Parr said. “Now we finally get to run.”

Initial construction on the site will erect the first of two 12,000-square-foot buildings. They’ll eventually be joined by a much larger strip center that will contain the remaining space. 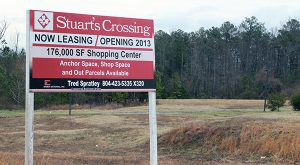 Sauer has been holding onto the land for more than 10 years. Photo by Katie Demeria.

The first building will have room for six tenants, three of which have already signed on for 2,000 square feet each: Starbucks, Five Guys and Verizon Wireless.

The entire shopping center will have room for about 15 or 16 tenants, though those plans are flexible, Parr said. It will have space for three anchor tenants, and Sauer is currently in conversations with two, he said, declining to go into detail.

Work on the first building will start by the end of the month and Parr said it will likely wrap up in spring of 2016. The Trent Corp. is the general contractor, and Freeman Morgan Architects is designing the project.

Parr declined to share how much the project is likely to cost but said Sauer is financing the work itself.

He said construction on the next phases will be dictated by interest from prospective tenants.

“We’re not going to build an empty building, but we feel that the design of our center and the location is pretty good, better than some of the other centers in this area,” he said. “A lot of tenants in some of those other centers suffer from visibility, but we’re at the first intersection north of Route 295 and Route 1, so when you get off the interstate, you’ll see us first.”

Now that construction is about to get underway, he added, it’s likely that more tenants will follow.

“Once you get to the construction, it’s really like paint by numbers,” Parr said. “But when you’re trying to create something out of nothing, you have to figure it out slowly.”

Farther south in the city of Richmond, Sauer is still working to create the 200,000-square-foot, Whole Foods-anchored Sauer Center on West Broad Street.

The entire city awaits the development of Sauers property on West Broad Street for the Whole Foods Anchored center. That will bring much needed retail development to the core of the City.

Love this quote from Shane Parr, “Once you get to the construction, it’s really like paint by numbers,” Parr said. “But when you’re trying to create something out of nothing, you have to figure it out slowly.”

It is a huge benefit to our RVA community, to have well vested visionaries amongst our midst. Taking notes….

With cutting edge architecture and top-flight anchor tenants like these, this will put Henrico on the map!

The only thing less original than a shopping center is complaining about a development of positive economic progress because it doesn’t have a brewery, Victorian architecture, or some rustic bicycle repair shop that only conducts business through community bartering. Give me a break. As to the snide comments made about Mr. Parr and Sauer Properties: the Sauer Co. and the family who owns it are the last ones standing from a bygone era of the heyday of the industrial/retail Midtown district. The Sauers own Pleasants Hardware, countless other historic properties in the area, and are one of Richmond’s last family-run… Read more »