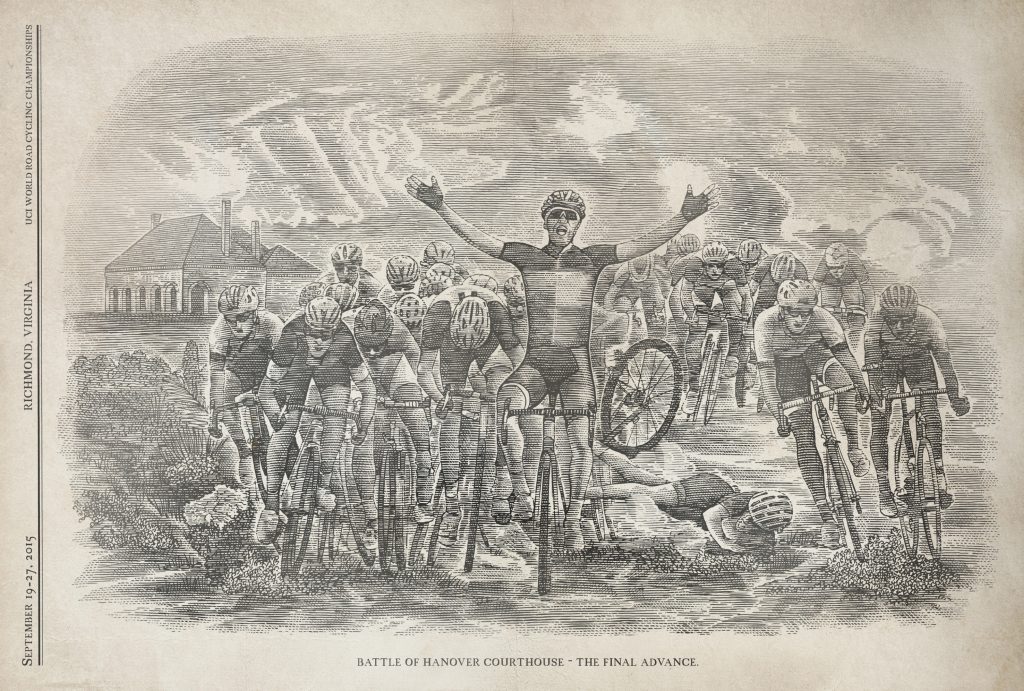 An advertising campaign meant to celebrate the arrival of the UCI Road World Championships has been pulled by the Richmond agency that created it.

A series of posters and radio spots produced by The Martin Agency that blended bike race imagery with Richmond’s Civil War history was shared with industry trade publications and local media outlets earlier this month. But after media coverage of the campaign picked up last week, some of the ads were taken off the radio and removed from the agency’s site.

Agency spokesman Dean Jarrett said the decision was made to pull back on the campaign so as not to distract from the actual event, which got underway Saturday and continues through this weekend.

“Some of (the) coverage in the trades was delayed and focused more on Richmond’s past than it did on the upcoming races. That was not our intention,” Jarrett said in an email. “RVA has been preparing for this event for four years and we didn’t want anything to detract from that so we simply hit the brakes so the bike races, here and now, have the spotlight they deserve.”

Jarrett did not elaborate on what prompted the agency to pull back on the campaign. He said the company is proud of the campaign, which it created independently of the bike race and its organizers. While the agency has done some branding work for the race’s organizing group Richmond 2015, Jarrett stressed that the group did not request, endorse or pay for the work, which he described as an in-house “passion project.” 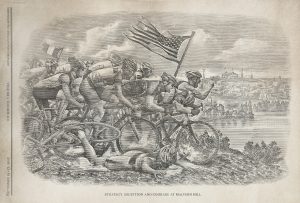 The posters, featuring etchings by artist Steven Nobel, likened the bike race to Civil War battlefield scenes that were depicted at the time in publications such as Harper’s Weekly magazine. The images noted the race course’s proximity to locations of historic battles and sites, such as Hanover Courthouse and Malvern Hill.

The images, which show some cyclists crashing and injured, include captions such as: “Strategy, deception and courage at Malvern Hill,” “The charge up Libby Hill – if these cobblestones could talk!” and “Battle of Hanover Courthouse – the final advance.”

The radio spots featured Ken Burns documentary-style readings of letters that described a spectator’s view of the race in similar fashion to a soldier writing home to a loved one. The letters stared off with names of Martin Agency employees and relatives addressed as “My dearest.”

Jarrett said the posters had been given to local bike shops and restaurants and several local stations had donated airtime to run the radio spots. By late last week, though, the work had been removed from the agency’s website, and the spots were no longer on the agency’s YouTube page.

An article on AdWeek.com that discussed the campaign was also revised to correct what Jarrett said were inaccuracies in the original version. The revised version includes a clarification that the bike race was not involved in and did not pay for the ads. It also removed a line that said the campaign risked alienating some observers even if comparing sports to battles was not revolutionary.

Asked if the company had concerns about how the work would be received, such as by Civil War purists and historians, Jarrett said it was considered during the creative process.

“The (creative) team talked a lot about that,” he said. “They were attracted to (the) juxtaposition of history being made, again, in Richmond.”

“The creative team wanted to compare some of the famous battles in Richmond’s history to the battles that will be waged by world-class cyclists during the biggest international sporting event ever held in Virginia,” Jarrett said. “They loved the way artists used to capture history in publications like Harper’s Weekly, so that’s where the idea for (the) etchings came from.”

The Martin Agency has not been alone in wanting to welcome the bike race to Richmond. Many other companies, restaurants and civic groups have likewise celebrated the event with building-size banners, artwork and signage.