A new pizza brand has landed in Midlothian with plans to pepper the Richmond map with more locations.

The area’s first Marco’s Pizza franchise is set to open next month at 13911 Midlothian Turnpike in the Charter Colony Shopping Center.

Husband-and-wife Harry and Sara Ragsdale are the franchisees and have leased a 1,400-square-foot space, where they will be the property’s first tenants. They plan to open a total of 10 locations in five years around Richmond. They chose their first spot because of its population density.

“We’re a family-oriented joint,” Sara Ragsdale said. “We really feel like this location is in the middle of a large neighborhood.”

Marco’s Pizza focuses on delivery and takeout for its pizzas, subs and salads. Ragsdale said the dough is made from scratch on-site and its cheese is never frozen. 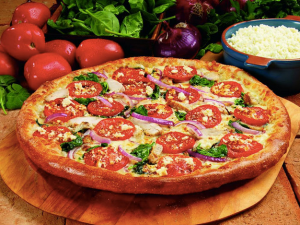 The chain’s other Virginia locations are in Hampton and Virginia Beach.

Prior to moving to Richmond this year, Ragsdale worked in the catering industry in South Carolina, and her husband is a former attorney. They bought into Marco’s after researching franchises to invest in.

“We looked at everything from Meineke to Lawn Doctor,” Ragsdale said.

Marco’s fit well with Ragsdale’s food background, she said, and the company is currently expanding. The Ohio-based chain operates more than 600 stores in 35 states and the Bahamas. According to its website, it has opened more stores than any other pizza company since 2007.

The Ragsdales enter a pizza market stuffed with competition. Pizza Hut, Domino’s Pizza, CiCi’s Pizza and Papa John’s are all in business along Midlothian Turnpike. There also smaller operations like Candela’s Pizzeria & Ristorante Italiano, A New York Slice, and Angelo’s Italian Restaurant operating in the area.

Ragsdale said the food and the support of a parent company will set her venture apart from the competition.

“We feel like we have a formula that works,” she said. “It’s a good balance of a better product than our competition with equal marketing resources, but a larger reach than our competitors with the more mom-and-pop style of pizza.”

It will cost about $300,000 to open the Ragsdales’ store, and they are financing it themselves. They plan to hire about 40 people to work the shop. A large cheese pizza will cost $10.50.

As they plot out their next nine locations, the Ragsdales are currently scouting properties in the West End and Short Pump for the next shop, which is planned to open September 2016. Broker Martin Blum of Colliers International represents the Ragsdales in their search.

Congratulations and best wishes to the newest member of the RVA franchise community.