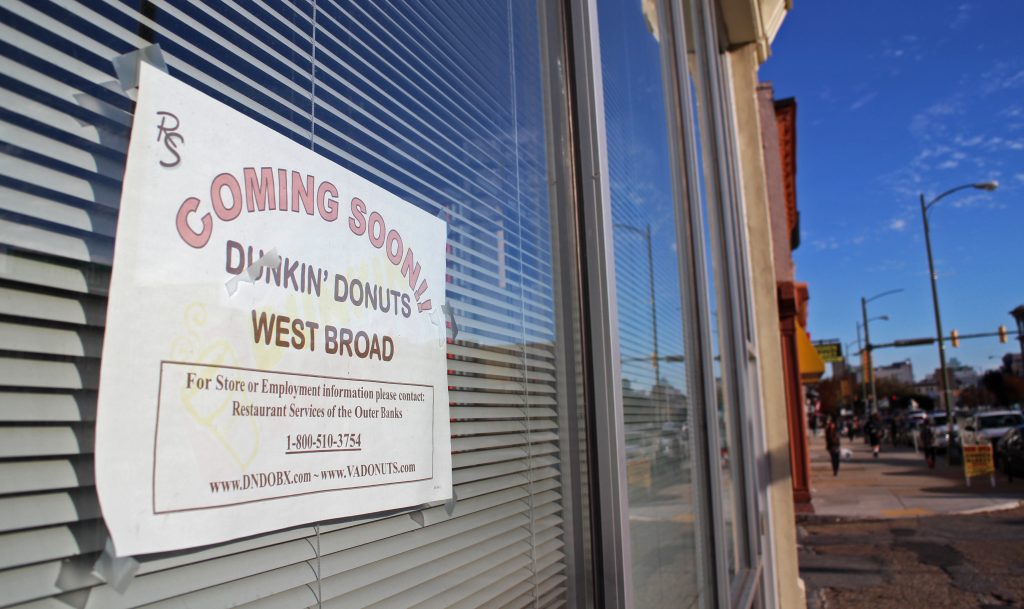 Dunkin’ Donuts will move in at West Broad and Goshen streets. Photo by Michael Thompson.

Seeing holes in the Richmond market, a couple from North Carolina has plans to sprinkle the area with a handful of new donut shops in the next year.

Husband and wife Gregory and Danielle Nigro are bringing at least five new Dunkin’ Donuts franchises to the region, beginning in January with a shop at 900 W. Broad St. near VCU.

They have a lease for the 2,200-square-foot space and have also secured future locations at 13521 Waterford Place in Midlothian, the forthcoming Eastgate Town Center in Henrico, as well as stores in Ashland and Chester. Gregory Nigro did not want to specify where the latter two locations are because they are home to still-operating businesses.

“I think (Richmond is) a very dynamic city with a lot of people who are looking for our product,” said Gregory Nigro, 39. “You’ll be seeing quite a few stores opening in the next 12 months. I’d be surprised if we ended at just five locations.” 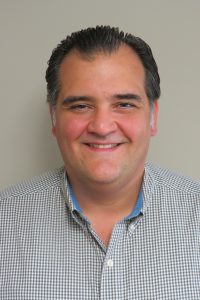 The shop will add to the Nigros’ existing local Dunkin’ store at 6801 Forest Hill Ave., as well as nine others the brand has locally with other franchisees.

Gregory said the terms of his franchise agreement with Dunkin’ Donuts require him to open 14 total stores in his Richmond territory, but he thinks the market could handle more.

“There’s a lot of room to come in and get into the market,” he said. “Dunkin’ Donuts used to be a regional player – it’s national, international now. It’s a tremendous brand.”

Dunkin’ Donuts is based out of Massachusetts, where it was launched in 1950. The Nigros opened their first Dunkin’ Donuts in 2008 in Nags Head. Since then they have opened 19 stores in North Carolina and Virginia.

Their focus on Richmond comes after the Nigros acquired the franchise rights to 75 percent of the Richmond market, not including Short Pump. Their efforts here are being financed with help from Village Bank and BB&T.

He said the VCU location is being designed by Massachusetts architect Jim Smith and built by Richmond-based Fastrack Construction. Opening on West Broad Street will put Dunkin’ Donuts amidst a growing batch of competitors going after students and workers in the area.

Classic Rock Coffee opened in May at 1322 W. Broad St., which is a few hundred feet west of a Starbucks. There are also independent brands like Alchemy Coffee, Urban Farmhouse, Lamplighter Roasting Co., and Lift Coffee Shop nearby.

Nigro said he thinks there’s room for Dunkin’ Donuts, in part because it competes more with McDonald’s and gas stations for its customers. He added that Dunkin’ Donuts sells fair trade and Rainforest Alliance-certified beans for customers who like a little consciousness in their cup.

“I think there’s room for everyone,” Nigro said. “When it rains, everyone gets wet. There’s certainly a place for us.”

Great to see a franchise brand expand its presence in the RVA market. A bit worried about oversaturation in the donut market though and that we will soon see attrition (much like we’ve seen in the local cupcake market in recent years). Best of luck to the franchise owner! On a franchise-related note, FRANdata is in town tonight to give its nationally acclaimed Year in Review and Franchising Forecast for 2016 presentation at the Virginia Franchise Forum event at The Westwood Club from 5:30 – 7:00 pm.