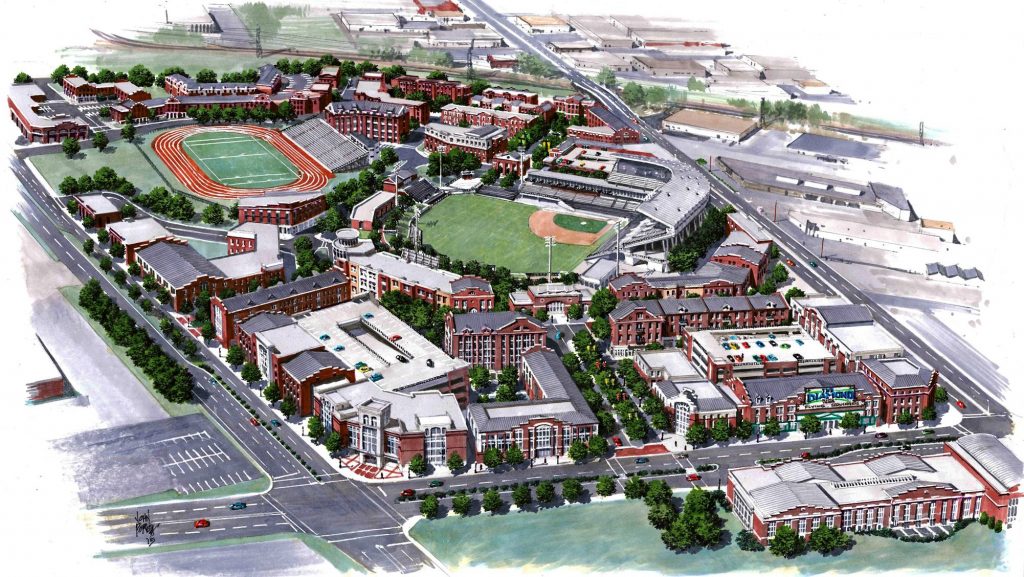 A new plan would put The Diamond at the center of a large mixed-use project. Renderings courtesy of Save The Diamond Committee.

A second pitch from the private sector to keep baseball on the Boulevard is aiming to keep The Diamond in place through a neighborhood-wide redevelopment effort.

A group of architects, developers and citizens called the Save The Diamond Committee presented a proposal Wednesday for updating the 30-year-old ballpark as part of a mixed-use development totaling 50 acres.

The proposal, which does not include cost estimates or recommendations on how to fund the project, calls for a ballpark-anchored neighborhood with 580,000 square feet of office space, 225,000 square feet of retail, a 75,000-square-foot fitness or health club, a 200-room hotel, 1,350 residential units, and surface and deck parking to accommodate 4,850 parking spaces.

This latest proposal would keep the existing stadium structure but improve upon what was built 30 years ago, said committee member Tom Hanson, who was the structural engineer on The Diamond when it was constructed in 1985.

“We built it for $6.7 million; we built it in six months,” Hanson said. “I’d like to think of it as our having built phase one, and what we’re proposing now is finishing that job.”

In addition to Hanson, other members of the committee include Randy Holmes, president of Glave and Holmes Architecture; Harry Warner, a consultant with West Avenue Associates; Carlton Moffatt, a former chairman and president of the Greater Richmond Chamber of Commerce; John Dempsey, a developer; Jim Lee, a contractor; Steve Terrill, of engineering firm AECOM; and Rick Tatnall, of Replenish Richmond. 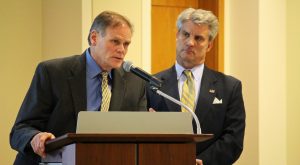 Randy Holmes (left) and Harry Warner present the plan to the public on Wednesday. Photos by Jonathan Spiers.

Improvements to The Diamond would include opening up its concourse to improve visibility of the field and other areas, the addition of skyboxes to provide premium or club seating, lowering the field to accommodate closer seating, and using soil from that to build a berm around the outfield.

The berm would provide an additional viewing area for fans, and the plans also call for a promenade around the berm that could also double as a pedestrian path in the off-season. Renovations would also add three more elevators to The Diamond, which currently has one.

The surrounding development – an area defined as between Hermitage Road and the railroad tracks and stretching from Broad Street to Interstate 64 – would include condensed areas for office and retail uses, a hotel and other buildings that would encircle The Diamond and reduce its visibility, and a public square at a new Boulevard entrance to the ballpark. The plans would also involve relocating the Arthur Ashe Athletic Center to another location within the neighborhood area.

“Obviously, this is just a concept,” Holmes said. “It needs a lot of work; it needs community input.”

Addressing a crowd of several dozen people who attended the presentation at the downtown Richmond library, Warner said the group has been meeting for a year and a half to come up with a plan for saving The Diamond – an option he said has not been part of the ballpark conversation.

“Nobody has presented a plan like this to be considered,” Warner said. “We’ve been hearing about the term ‘highest and best use’ as being presented to consider for developing this site. We submit that the highest and best use is not just maximizing the tax revenue or return on investment.” 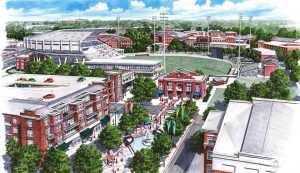 The new plan calls for redoing the entrance and area immediately around the stadium, including the installation of a promenade.

Other considerations, he said, include “proper real estate uses in keeping with the area and sustainability for years into the future.”

“And it must include quality of life,” he said. “And that includes, in this instance, baseball on the Boulevard.”

As to the finances of the idea, Warner said there are too many variables that could affect the proposal’s overall cost. Holmes said such things could include whether the city works with a master developer, assuming it supports and approves the concept.

“We’re just encouraging the city officials to really consider this as one of the very viable options for highest and best use of the land,” Holmes said. “Beyond that, I don’t know.”

Holmes said the proposal would likely save between 20 and 30 percent of the cost of a new stadium.

The proposal comes just days after the Richmond Flying Squirrels announced plans for several upgrades to The Diamond, including an elevated deck with a bar and additional seating along the right field line, improved lighting in the concourse and more games in its Kids Zone.

Other improvements, to be completed in late February or early March, include electronic concessions menu boards and a repainting of the scoreboard. Flying Squirrels VP and COO Todd Parnell said the upgrades would likely exceed $50,000, adding to more than $100,000 he said the ball club plans to spend on other fan experience enhancement efforts in 2016.

Asked why the club is spending money on upgrades when an uncertain future continues to loom over The Diamond, Parnell said such investments are what the club can control and that the fans deserve them.

“We need to do as much as we possibly can, for however long we’re still here at The Diamond, for our fans,” Parnell said. “Because our fans have proven, year in and year out – by being the attendance leaders in the Eastern League, either average, per-game or overall – that they’re passionate and loyal towards us. And we always will be passionate and loyal towards them.”

The Save The Diamond proposal is the second to come from the private sector since Richmond Mayor Dwight Jones proposed building a new ballpark in Shockoe Bottom and freeing up the city-owned property for private development. Last year, Midlothian-based Rebkee Co. pitched a plan to replace the city-owned Diamond with a new stadium on the Boulevard.

“We need to do as much as we possibly can, for however long we’re still here at The Diamond, for our fans.” This guy’s a class act. The rendering looks like a nice pan, too. Why is it so difficult for people to get together and make something happen?

I wish the plans would have included an indoor arena so we could attract more college level basketball games and tournaments. A larger arena would also allow the average person to attend games without making a several thousand dollar payment to their favorite college or university.

Bruce the people are together as most fans and the surveyed public want to see baseball stay on the Boulevard. A mixed use development around the site, with or without baseball, has also been agreed upon but our great Mayor wants the development his way and to summarize it he doesn’t want to “play ball” fairly.

Great plan. The worst decision is no decision in the case of baseball in Richmond. As an outside follower of this – please get something done!

As a Richmond Flying Squirrels fan and resident of Henrico County, I love the convenience of the Diamond’s Boulevard location; however, I am keenly aware that most Flying Squirrels spectators are not residents of the City of Richmond. Additionally, the City does not have another site that rivals the Boulevard location for development and generation of significantly more property tax revenue. It will be perfect if a solution comes to fruition that keeps the Diamond on Boulevard and adds development to maximize the property taxes generated. But if such a solution does not materialize, I am sympathetic with the Mayor’s… Read more »