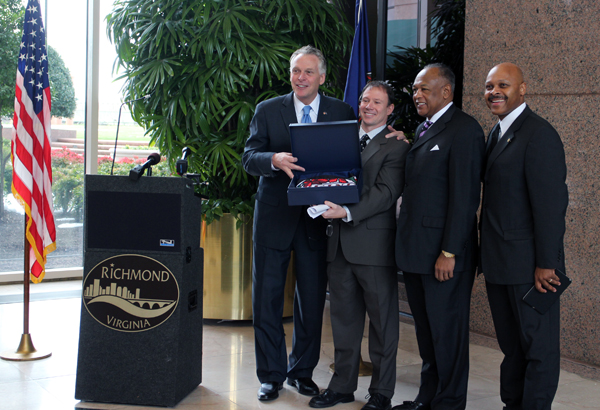 After searching up and down the East Coast for its newest location, a New Jersey-based technology company is preparing to plant roots in Richmond.

AvePoint Inc., which specializes in Microsoft Cloud services and software, on Friday announced its intention to open an office in Riverfront Plaza and hire at least 100 employees here by the end of the year.

The plans were announced by Gov. Terry McAuliffe at an event held downtown that included Mayor Dwight Jones and state Secretary of Commerce and Trade Maurice Jones.

“Richmond is hot, Richmond is resurging, Richmond is thriving, and you now come to add to that atmosphere,” Dwight Jones said to AvePoint executives during the event.

Thomas Lin, Avepoint’s corporate vice president of North American sales, said the company’s goal is to hire at least 10 employees a month to reach or exceed its goal of 100 employees by the end of the year. It began hiring two weeks ago and has about seven employees signed thus far. The new office will handle sales for the company. 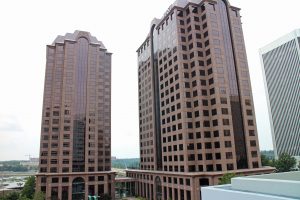 Avepoint currently occupies about 3,000 square feet in Riverfront Plaza, and Lin said it will look to expand to up 30,000 square feet of additional space toward the middle of the year as its local employee base grows.

“We’re a very young tech startup company, like anyone you see in Silicon Valley,” Lin said. “We started in a garage, we started with nothing, and we grew very quickly.”

AvePoint has been considering where to open its next U.S. office since last summer, Lin said. It decided on Virginia in early December.

The Virginia Economic Development Partnership, the Greater Richmond Partnership, the governor’s office and the city worked to lure the tech company to Virginia, competing with Pennsylvania, Georgia and New Jersey.

“We here in Richmond are part of America’s history. In 1607, those three boats from Britain didn’t go to Georgia, they didn’t go to Pennsylvania; they came here to the Commonwealth of Virginia,” McAuliffe said as he presented Brian Brown, AvePoint’s general counsel, with the state flag.

“As a software company, it’s about work, life, happiness,” he said. “We work very hard, but we want to be a cool tech company. Craft breweries, fine dining, graffiti art – these are the things we live for.”

Riverfront Plaza, the company’s Richmond home, was recently sold for $147.5 million. CBRE | Richmond handles leasing for the property, which most recently had about 250,000 square feet of vacant space between its two towers, though that number does not include AvePoint potentially taking over 30,000 square feet.

In addition to at least 100 jobs in Richmond, the company plans to expand an existing location in Arlington by 55 employees.