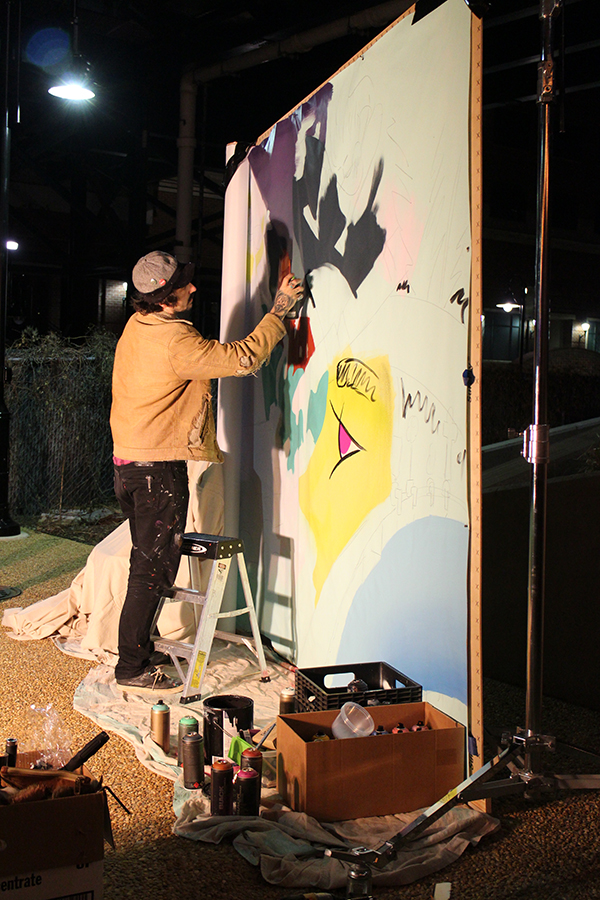 Local artist Mickael Broth began work at Thursday’s event on the mural to be featured in the booth. Photo by Jonathan Spiers.

A contingent of Richmond business boosters is planning a marketing assault on this year’s South by Southwest Interactive Festival.

The five-day event in Austin, Texas, will see representation from Richmond in the form of a tradeshow booth, designed by students at the VCU Brandcenter. Made to resemble an outdoor city space, complete with a building-side mural, a park bench, faux grass and a water fountain (filled with Stone Brewing beer), the booth is intended to lure SXSW Interactive attendees to learn more about Richmond and what the city has to offer.

The booth will be manned by a team representing economic development group Greater Richmond Partnership, Richmond Region Tourism, Virginia Biotechnology Research Park, the VCU School of Engineering, the Brandcenter and the University of Richmond, as well as others supporting the effort, including Capital One and Altria, which are funding the booth and a festival meetup, respectively.

Chesterfield and Henrico counties and the City of Richmond will also have representatives at the booth, which is valued as a $40,000 contribution from the Brandcenter. First-year students Xia Du and Stanley Hines and second-year Mario Bibian competed with fellow student teams to design the booth, which will also feature an interactive display produced by video firm Whitlock and furniture provided by Hanover-based Creative.

Bethany Miller, vice president of business development for Greater Richmond Partnership, said the festival meetup would invite companies identified based on industry and location that would benefit from locating or doing business in Richmond, with Stone Brewing serving as a prime example.

“That’s an awesome story of how a brewery started out on the West Coast in a hip community and ended up expanding into Richmond,” Miller said, adding that a goal is to have Richmond included in conversations with other cities considered “hip,” Austin among them. 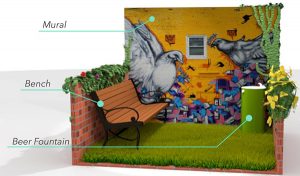 A rendering of the Richmond booth that’s headed to SXSW. Courtesy Brandcenter.

Industries targeted at the festival include advertising, IT and research and development, as well as advanced manufacturing and healthcare firms that have a presence at the technology-focused show. Miller said a three-person team attended last year’s event and came back motivated to make a strong impression this year.

“It was challenging to start a conversation with companies who were attending about why Richmond is something that they should keep on their radar.

“This is a marketing mission for us,” she said, noting that the team would not have access to other parts of the larger SXSW festival. “It’s a little bit of a deviation from what the normal tradeshow attendance for GRP would be like, but this is a bit of a different audience.”

The groups kicked off the effort Thursday night with a gathering at Casa Del Barco downtown. Local artist Mickael Broth started the mural to be featured in the booth outside the restaurant during the event.

Adding to Richmond’s presence at the festival will be UR professor Susan Cohen, who is giving a presentation at this year’s event. A co-director of the U.S. Seed Accelerator Rankings Project, the results of which are released each year at SXSW, Cohen recently was awarded a nearly $96,000 grant to further her research of business accelerator programs across the country.

Build a brewery and they shall come! In addition to having Stone Brewing as part of the display, it would be appropriate to include products or representatives of businesses that were actually started in RVA that have become successful (Hardywood etc) This would demonstrate that not only do we attract west coast based companies, but we have a climate that is conducive to start-ups. P.S Don’t forget to wear your beards and skinny jeans.

And if anyone is looking for successful local breweries here in Richmond, here’s the place to check ’em out – http://www.cheersva.org/directory/categories/richmond-metro-breweries/

except the whole point, James, is to encourage business to locate or move here a la stone. but this was a super good response and very edgy.