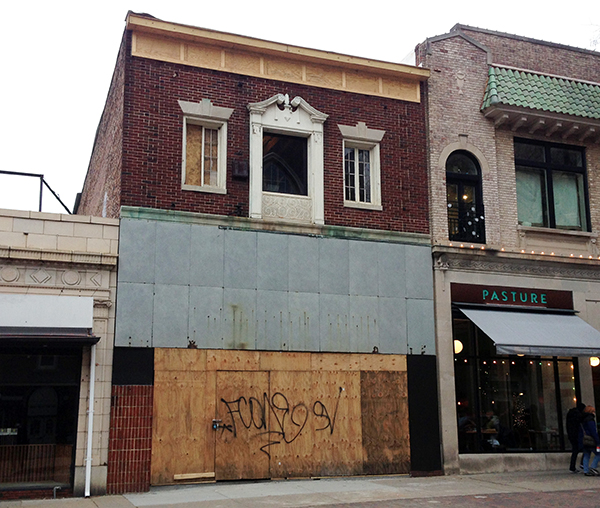 The building is being transformed by EAT Restaurant Partners and Monument Cos. Photos by Michael Thompson.

One of Richmond’s busiest restaurant groups has unwrapped its plans for a downtown eatery.

Chris Tsui of Eat Restaurant Partners said he and his partners plan to open Wong Gonzalez in July at 412 E. Grace St. downtown. Plans call for a “bar-focused” restaurant with a menu that combines Asian and Mexican fare.

“I thought it would fit the area pretty well,” Tsui said. “It will be a more approachable menu. The price points will be low, approachable.”

Tsui would not say what it is expected to cost to open Wong Gonzalez. He owns the 3,800-square-foot restaurant space and the two apartments above it along with Chris Johnson and Tom Dickey of the Monument Cos.

The company also has a new sushi restaurant in the works in the forthcoming GreenGate development in Short Pump.

Wong Gonzalez will join a host of restaurants that have opened along East Grace Street, including Pasture, Rappahannock, Julep’s and Lucca Enoteca Pizzeria. A new sandwich shop is also in the works at the corner of East Grace and Fifth streets.

At least one restaurant has closed in recent days in the area: Kenn-Tico Cuban Bar & Grill at 204 E. Grace St. is no longer open, according to a Richmond Times-Dispatch report.