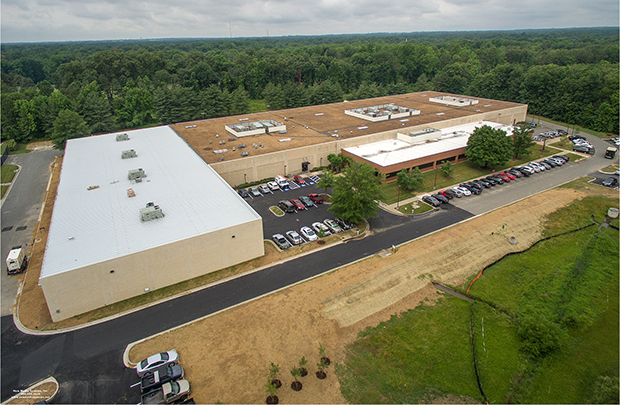 The 142,000-square-foot building is fully occupied by Colortree Group. Photo courtesy of Thalhimer.

An out-of-town buyer has made its second move in the Richmond market.

The property, constructed in 1989, is fully occupied by the headquarters of Colortree Group, a direct mail marketing company founded in 1998.

The seller was a partnership made up of the Maryland-based Fernau LeBlanc Investment Partners and another Washington, D.C.-based equity partner, according to Eric Robison of Cushman & Wakefield | Thalhimer, who represented the seller.

Robison said the deal was driven by the seller’s desire to exit the investment. The partnership purchased it in 2012 for $5.3 million.

Stewart Cos. first ventured into Richmond in 2012 with the acquisition of the xTeriors plant in Doswell, according to a Thalhimer news release.

“We’ve known Stewart for some time,” Robison said. “They’re a really strong buyer, and they’ve been looking in this market.”

The Pennsylvania company’s Virginia representative, Cameron Wick, did not return a request for comment by press time.

“(Wick has) been doggedly pursuing opportunities in this market,” Robison said.

“Really the most interesting thing (about this property) is the tenant itself,” Robison said. “I think their financial strength and long-term lease were attractive.”

Stewart isn’t the only buyer to venture into Villa Park. Last July, the Virginia Department of Game and Inland Fisheries paid $8.5 million for its new headquarters at 7870 Villa Park Drive.