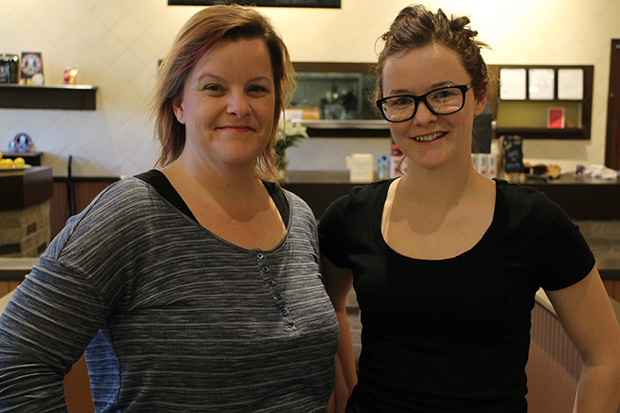 Owner Nancye Hunter with her daughter, Sarah Hunter, who works at the cafe. Photos by Michael Thompson.

In the next step in the evolution of her local Paleo diet meal delivery service, Nancye Hunter has taken on a new partner and is up and running in a new restaurant downtown.

The Extraordinary Café opened March 7 at 1001 Haxall Point in the lobby of the Troutman Sanders building. Hunter and business partner Jason Kilgo have leased the 1,950-square-foot space formerly home to Canal Café.

The café is a complement of sorts to Hunter’s company, The Extraordinary Caveman, which offers delivered meals that adhere to the Paleo diet, meant to be closer to what cavemen may have eaten by eschewing grains and processed foods in favor of meats and vegetables.

The Extraordinary Café will serve breakfast and lunch with Paleo diet items available. The cafe space will also function as a kitchen and commissary for the meal delivery service, which Hunter launched in 2005 from her home.

“It’s basically going to be two businesses in one location,” Hunter said. “It had the space that we needed. It offered another opportunity for added revenue sources in breakfast and lunch.” 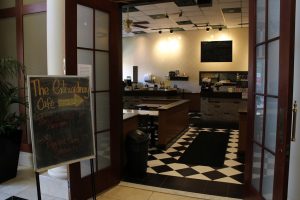 The cafe is in the lobby of the Troutman Sanders building.

Hunter, 45, said she met Kilgo when he approached her at a tasting she was giving at CrossFit Midlo in Chesterfield. Kilgo, 38, is a former customer who had been trying to get involved in a Paleo diet food venture for some time.

“We decided to go in as 50-50 partners in expanding the business,” Hunter said.

Meal delivery customers order what they want online. Hunter then cooks everything on Sunday and packages the orders. Deliveries to local CrossFit gyms, offices and homes go out on Mondays in an area spanning Petersburg, Ashland and Short Pump.

Hunter said she does about 25 deliveries a week made up of between 225 to 250 meals. Dinner meals cost between $9 and $11, and lunches cost between $7.50 and $8.50. The menu at The Extraordinary Caveman changes each week.

“The Paleo lasagna is very huge,” Hunter said. “Our Paleo chili is a big seller, as well.”

Hunter got into selling Paleo meals as a way of padding her income while working in the restaurant business. She also worked for the Federal Reserve in Richmond. She started out by posting online asking whether people would be interested in a Paleo meal delivery service. The response was positive enough to convince her to become an entrepreneur full-time.

Now, with a new partner, Hunter hopes to expand The Extraordinary Caveman’s reach even further.

“Our three-year plan is to franchise,” she said. “We hope to have a couple satellites in the Richmond area by the end of the year.”

The Extraordinary Caveman is at least the second Paleo diet delivery service to make a go of it in Richmond. fED Kitchens launched in 2012, but ceased its delivery service sometime in 2015, according to its website.

Cool concept, very conducive to franchising, but whether the concept could be sustainable over the long run is another story. I’d study the most recent wave of meal prep and delivery franchise flops in the last 10-20 years and be careful not to make the same mistakes. Good luck!

While I must note that the food industry is one of the most risky, putting my consultant hat down, I must say I’m SO excited. As one of the Paleo lifestyle I am excited to let someone else do the cooking and you will see me soon. Best of luck and I hope that you beat the odds.