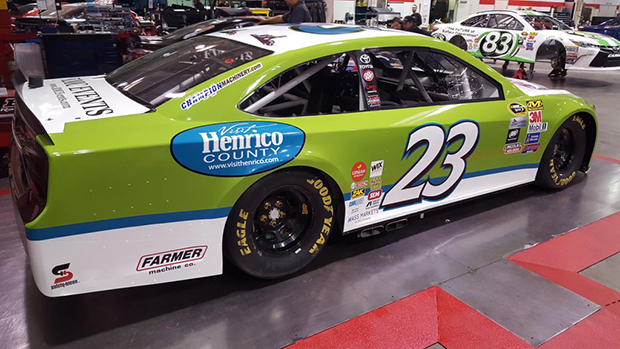 Logos for Henrico County and the Flying Squirrels adorn the No. 23 car. Photo courtesy BK Racing.

As the Sprint Cup Series roars into Richmond this weekend, more locally based companies are catching a ride with NASCAR.

The Flying Squirrels, RMC Events and Union will appear on both of those cars as associate sponsors. Visit Henrico County will also appear on the SweetFrog Camry, and Union will also have a logo on a third BK Racing car: Ryan Ellis’s No. 93 ScienceLogic Camry.

ScienceLogic, an IT management firm in Reston, is one of two other companies in Virginia sponsoring cars in Sunday’s race. Smithfield Foods, based in Smithfield, is the primary sponsor for Aric Almirola’s No. 43 Smithfield Ford Fusion with Richard Petty Motorsports.

The local support is a step up from last year, when Richmond had one local sponsor represented in the race: Estes Express Lines, which was the primary sponsor for Jeb Burton’s car. The freight shipping and transportation company remains a sponsor with Burton, though it was not decided Thursday whether its logo would appear in Sunday’s race.

The local participation with BK Racing can be attributed to the efforts of Doug Fritz, the Charlotte-based team’s chief marketing officer and a former president of Richmond International Raceway.

Fritz said connections he’s maintained in Richmond led to many of the deals, which also resulted from past partnerships and current business involvements. Union, for example, has a banking relationship with the team, Fritz said.

“This was kind of unique,” Fritz said of the wave of sponsorships. “It started at the beginning of April, when we signed on ScienceLogic. That started the influx of the Virginia-based and the Richmond-specific brands.”

Fritz then reached out to Todd “Parney” Parnell, vice president and COO of the Flying Squirrels, who he worked with on past collaborations between the racetrack and ball club.

“I got to thinking that the opening of his baseball season kind of tied in with the racetrack, so that’s what started the dialogue with that. He jumped right on. It got pretty exciting from there,” he said.

Parnell, who used to work for racing legend Dale Earnhardt as vice president and general manager of the Kannapolis Intimidators, a North Carolina ball club once owned by the late driver, said the Flying Squirrels’ sponsorship was as much about relationships as it was about promotion and visibility for the team.

“Doug and I go back to when the team first arrived here, and he continues to be a close friend,” Parnell said. “The relationship extends to RIR – Dennis Bickmeier (the raceway’s president) is also one of my best friends, we do a lot of collaborations with RIR, so being involved with BK Racing for the Richmond race connected us to our friends at RIR.

“And if you look at the cars that Doug’s put together for the Richmond race, they’re local and they’re community, and I think the Flying Squirrels are certainly that,” he said. “We wanted to be a part of the weekend’s festivities with the other community partners that are on those cars.”

Fritz also noted local connections with BK Racing owner Ron Devine. While the racing team is based in North Carolina, Devine is based in Northern Virginia – one of only two NASCAR teams with a presence in Virginia, Fritz said.

He said RMC Events was quick to sign on, as the Henrico-based firm provides services at RIR. He said the same was the case with Henrico County, which plays host to the raceway. 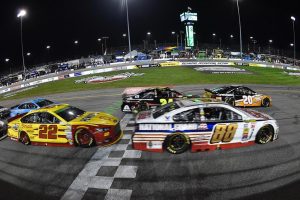 “They see it as a great opportunity, a unique opportunity, to promote Henrico County as the destination of where to eat, stay and shop while all the race fans are in town,” Fritz said. “So I thought it was a natural tie-in.”

Union, meanwhile, is no stranger to sports sponsorships. Its brand has been featured at Virginia Tech football games, and the bank struck a deal with the Hokies again this year, securing naming rights for the school’s baseball complex.

The values of sponsorships for a Sprint Cup Series race can range from hundreds of thousands to millions of dollars. NASCAR’s website, citing Adweek, states a primary sponsorship in 2013 cost between $5 million and $35 million, while an associate sponsorship cost from $250,000 to $2 million.

Fritz would not discuss the value of BK Racing’s sponsorship packages, but the deals come with perks beyond the car’s paint jobs. David Ragan, the driver of the SweetFrog car, is making an appearance tonight at its Ashland-area fro-yo store at 10040 Sliding Hill Road from 7 to 9 p.m.

And the Flying Squirrels announced and celebrated their sponsorship with a “Turn Left Night” theme this week at The Diamond, where presenting sponsor AAA’s No. 3 show car and the RIR pace car were on display.

While the Squirrels lost that night in a 5-4 defeat, Parnell said Sunday’s race is already a win for his team, which plays an away game the same time as the race’s 1 p.m. start.