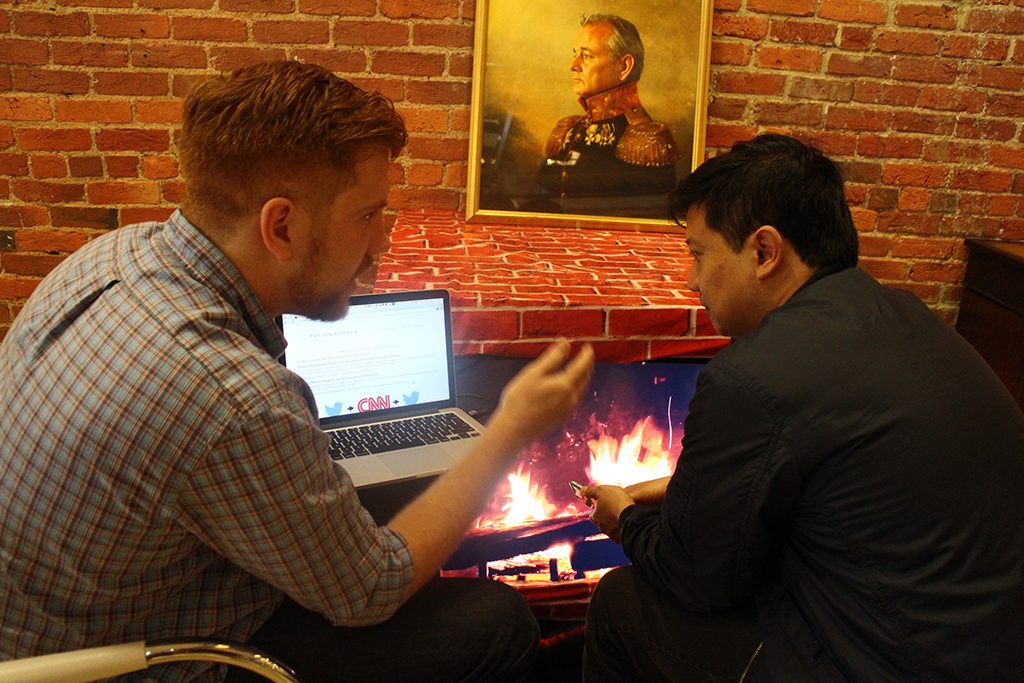 One student’s booth featured a Bill Murray portrait above a digital fireplace.

It’s that time of the year again when the VCU Brandcenter becomes ground zero for recruiters looking to hire the latest additions to the creative industry workforce.

About 225 recruiters from such companies as Facebook, Foursquare and Volkswagen descended on the graduate school Wednesday and Thursday to meet with this year’s class of 101 graduates.

That’s more than double the number of recruiters per student – pretty good odds for this year’s grads. 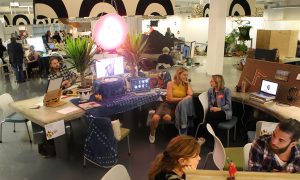 Students at their booths at the start of day two.

Unlike traditional job fairs where students go to the recruiters, the Brandcenter turns the tables with an inverted career fair, in which students set up elaborate stations reflecting their work and personalities and have the recruiters come to them.

Among them on Thursday was Sean Banks, a strategy track student who was meeting with his 13th or 14th recruiter after just the first day.

On the other side of his station was Whitney Cavin, a recruiter for ChildFund International and herself a Brandcenter alum – class of 2015. About 30 of this year’s recruiters were products of the Brandcenter, at one time sitting in the same chairs as Banks and his classmates.

“It’s a lot less pressure,” Cavin said of her new role. Recalling her class’s fair last year, she added: “It was such an invaluable networking opportunity. I met people at agencies I always admired just by way of having a table here. And it’s really a moment of pride: you’re sharing two years’ worth of work.”

Banks acknowledged the pressure that Cavin referred to, noting the preparation required and two years’ worth of buildup to the two-day event. However, he said, “When you realize it’s just people talking to each other, it’s a lot of fun.”

The Brandcenter, which is celebrating its 20th year this year, typically sees a job placement rate of 97 percent each year, or better. Over two decades, it has graduated more than 1,000 students who have gone on to work for both ad and marketing agencies and clients, as well as others who opted to start their own businesses.

Top agencies that participated in the recruiter session this year included Droga5, 72andSunny, R/GA, Venables Bell & Partners and Wieden + Kennedy. Other recruiters represented the client side of the business, such as Facebook, Foursquare and Creative Artists Agency (CAA), as well as consulting firms such as Siegel + Gale, Phenomenon, Inamoto & Co., Giant Spoon, and Forever Beta.

The consultants were a new recruiter segment this year. Other additions for this year’s fair were Volkswagen, film-production company B-Reel, and CAA.

And earlier this month, Google did its own VCU recruiting prior to the fair, inviting several students to its headquarters in Mountain View, California, for on-campus interviews that were being held this week.