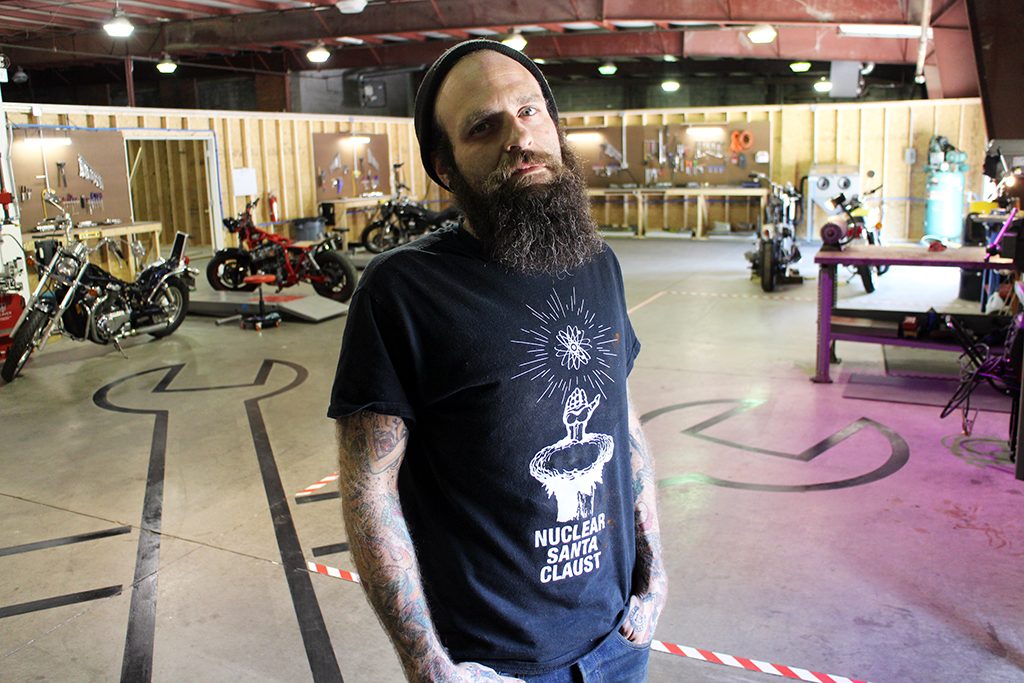 A local motorcycle enthusiast is bringing a DIY aesthetic to his new repair shop in Shockoe Valley.

The venture combines a for-profit repair shop with a community space for riders to work on their own bikes, with Manning offering advice and assistance as needed. The garage part of the shop operates as an incorporated nonprofit, called EnF Community Garage.

Manning opened the space in April with his wife, Heather Manning, who he met through riding motorcycles. He said the goal of Engine and Frame is to foster similar relationships while also sharing their knowledge – and tools – with other riders.

“I really do believe that motorcycles can form long-lasting, solid relationships,” he said, “whether it be friendships, romantic relationships, whatever. People can really bond over this idea of working on things together and building things together, especially if it’s two people that are really into the same kind of bike.” 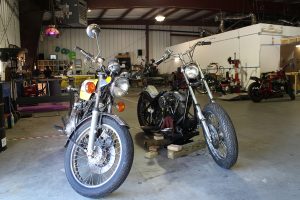 The shop has already drawn in some maintenance jobs.

Manning offers an hourly rate of $85 for his own services and $15 to those who want to work on their own bikes. He’s also planning to offer a yearly garage rate, the price of which is to be determined. He plans to offer workshops on a regular basis.

“The whole point is to teach people,” he said. “It’s also a necessary thing, I feel like, in a city like Richmond where everyone lives in apartments and things like that.

“When I built my first bike, I rented a very small garage in the Fan to do it, and I spent $120 a month and had one power outlet and no tools, no one there to answer any questions.”

Manning, 35, moved to Richmond 10 years ago, playing bass in several bands and working in the kitchens of local restaurants. He said a run-in with the law led to him to decide to get sober, and get serious about his career, enrolling in a technical school in Florida where he picked up his certification.

After working at several larger bike dealerships, Manning said he knew he wanted to open his own shop; he just didn’t know how to go about doing it.

“At the time, I had no idea how I was going to do it. I had no money,” he said. “Apparently getting a business loan is a lot harder than I thought.”

He reluctantly accepted an early inheritance offer from his grandfather, and Manning went about setting up an LLC and started spreading the word about the shop on the Internet, even before he had opened his doors.

Friends in the local music scene connected him with accountant Curtis Grimstead, who suggested the nonprofit approach, and local attorney and musician Justin Laughter, whose clients include local rock outfit GWAR.

All in all, Manning said he’s put upwards of $25,000 into starting up the shop, which fills 3,000 square feet of a 40,000-square-foot industrial building that also houses a number of other tenants. One of them, ClawHammer, is run by Zach Jester, of Van Jester Woodworks, who subleases the building to tenants such as knife maker Join Or Die Knives and jewelry maker The Metalsmith. 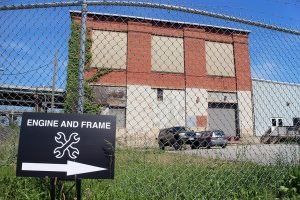 Engine and Frame’s home base.

The 2-acre property, which is listed for sale or lease by Colliers, appealed to Manning for its isolated location, beside and below Interstate 64 to the north of Shockoe Bottom.

“As cool as it would be to be in Scott’s Addition, we’d be surrounded by these fancy apartments. We can’t be out there running Harleys,” he said.

Manning said the location is also conducive to hosting gatherings and events. He’s planning a grand opening in July.

Since opening four weeks ago, Manning said he’s picked up three members and is currently working on three bikes.

“I get a lot of people who just stop in and check out the place, which is really good,” he said. “I’ve tried to create a very cool vibe in this place.

“What I have noticed too is when people come in here, they get extremely motivated. They’re here to work on their bike. It’s not their house, where it’s real easy to say, ‘I’m just going to watch TV.'”

The concept is similar to local co-op Rag and Bones, which focuses on bicycle repair. While other community motorcycle garages exist around the country, Manning said none of them include a traditional repair shop component.

“Which I think is strange,” he said. “I think it’s a no-brainer. Maybe it’s going to be too much of an undertaking for me. Maybe that’s why they don’t do it.”

Engine and Frame joins other motorcycle shops in the area, such as custom bike builder Classified Moto. Local repair shop Velocity Motorcycles closed at the start of this year after a 15-year run.

If you want to do some other stories on custom motorcycle businesses in the area, there is Andrew Swenson Design in Scott’s Addition. He paints some of the race bikes for some of the biggest teams in the country. Also, Sonny Naylor of Naylor Finishes. Some of the most incredible custom paint work on motorcycles I have seen anywhere. Plus I know he has done some paint work for Classified Moto. You should at least take a moment to check out their FB pages or web pages.