A sprawling retirement community in Mechanicsville is looking to grow once again – and it’s seeking more bond financing from Hanover County to do it.

Covenant Woods, a nonprofit that operates a 319-unit facility on 86 acres at 7090 Covenant Woods Drive, is seeking up to $34 million in revenue bonds to fund another large-scale expansion on its grounds.

The Hanover County Board of Supervisors is set to vote on the request at its June 22 meeting.

If approved, the measure would add about 30 new full-time jobs to Covenant Woods’ 285-member workforce – helping cement the firm as one of Hanover County’s largest employers and biggest taxpayers.

“As part of the expansion we are looking to employ more people,” said John Dwyer, Covenant Woods president and CEO. “We plan to hire more CNA nurses, housekeeping and dining employees.”

Revenue bonds are typically issued to income-generating companies or projects by a municipality’s governing board without a public ballot vote.

However, before the municipality’s governing body can authorize issuing the bonds, Virginia municipal law requires a public hearing to outline the scope of the bond’s use for the respective project.

In most cases, debt from the bond is repaid by revenue generated from the business receiving the money over a period of time – as will be the case with Covenant Woods’ latest request.

Hanover County has backed a couple of revenue bonds for Covenant Woods dating back to 1999, when county officials first authorized a $34 million revenue bond to help kick-start construction of its current facility after it moved from Richmond.

The initial project included 54 independent living apartments, 29 independent cottages and the assisted living and nursing building, said Beth Richardson, Covenant Woods director of marketing and development.  The remaining balance of the 1999 revenue bond, about $28 million, was refinanced in 2012 and is being paid off by the firm. 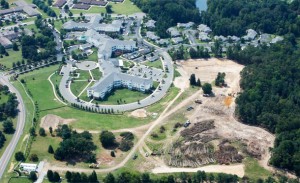 The Covenant Woods complex in 2012, as it began expansion.

In 2012, Covenant Woods received about $65 million in revenue bonds from the county, and a $37 million loan, for another expansion of the facility which was completed in 2014.

“They have been a great business for Hanover County,” said Edwin Gaskins, director of the Economic Development Authority of Hanover County. “We’re proud to have them here.”

Erik Mauritsen, Covenant Woods chief financial officer, said officials paid back the $37 million loan in full in July 2015, and owes $61 million on the 2012 revenue bond amount, which is set to mature by 2047.

No defaults or delayed bond payments have occurred since the county began fronting Covenant Woods revenue bond money for its expansion projects.

If the proposed $34 million revenue bond is approved, officials have up to 40 years to pay back the money, according to state municipal law.

As a continuum of care facility, Dwyer said Covenant Woods is obligated to provide a multitude of senior living quarters and services that ultimately allow residents to transition through the facility as they age and their health needs change.

Dwyer said the facility currently houses about 300 residents in its independent living apartments and cottages. He said another estimated 60 residents live in its assisted living and healthcare units.

“We have a contractual obligation to provide assisted living and healthcare services should our clients need it,” Dwyer said. “This expansion is fulfilling that need.”

Lancaster, Penn.-based RLPS has been tapped for the project’s architects and interior designers, while Newport News-based W.M. Jordan Co. has been selected as the general contractor.

Officials with Covenant Woods expect to receive its Certificate of Public Need (COPN) for the 23 additional nursing units by July 8, Dwyer said. A COPN must be retained from the state heath commissioner before certain medical care facility projects can take place.

Work is underway on the Grove at Lucks Lane – a nearly 200-unit senior living facility on about 20 acres in Chesterfield County along Lucks Lane near its intersection with Courthouse Road.

The Pew Research Center estimates that close to 10,000 baby boomers, born between 1946 and 1964, are retiring every day.

Dwyer said officials of Covenant Woods are aware of the growing need for senior living and healthcare services, and are hoping to secure the $34 million revenue bond to meet pressing demand for services at its facility.

“This is important for us,” Dwyer said. “We’re all excited about the expansion. We have a dynamic campus and we’re looking forward to the future.”