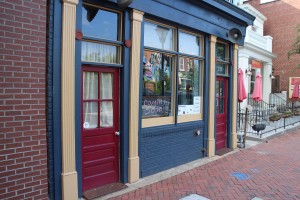 Owner Ahmed Razak plans for the restaurant to convert into a hookah lounge and rooftop hangout at night.

Add Mesopotamian inspired cuisines, and a rooftop deck, to the menu in Jackson Ward.

Meso, a restaurant that will offer a blend of Greek, Indian and Lebanese dishes, plans to open in the two-story, 2,200-square-foot building at 522 N. Second St. in Jackson Ward after the July Fourth holiday, said Ahmed Razak, owner/operator and chef of the new venture.

“I like what’s happening in the neighborhood,” Razak said of his decision to open in Jackson Ward. “Give it two to three years, and I feel like that area is going to be the next Carytown.”

Razak said he has invested between $50,000 and $100,000 to upgrade the space since purchasing it six months ago. He said his contracting company – Richmond-based All Star Painters – is completing renovations to the space.

Meso will be staffed with three people. However, Razak said that number may increase to seven to handle increased customer traffic once university students return.

“Much of the money has been used to upgrade the building and on equipment,” Razak said. “We still have a few things to complete, but once we get it done, it’s going to look great.”

In addition to Indian, Greek and Lebanese dishes, Razak said Meso will offer well-known items such as kebobs, gyros and pizza. It also will offer breakfast options that pair coffee and tea with ethnic dishes.

“It will be quality food at fair prices,” Razak said.

When night falls, Meso’s second floor will open into a hookah lounge, where on Friday, Saturday and Sunday, Razak said lounge music would fill the space. He added the roof also would be a hangout – an entertainment trend catching on across downtown Richmond, with at least two other rooftop bars opening in recent months.

“We’re waiting on our ABC license, because we do plan on serving drinks that people can take on the roof with their friends,” Razak said. “We’re going to have Italian/Swedish-style lounge furniture that will make it really nice for people.”

With Meso preparing to open in the coming days, Razak said he’s not done expanding his business empire – in the next year or two, he plans on opening another restaurant, preferably in Carytown or the Church Hill areas.

In the meantime, Razak is pleased with the growth and momentum occurring in Jackson Ward.

“This is an up-and-coming area,” Razak said. “There is a lot going on in the area that I feel is going to be good for business.”