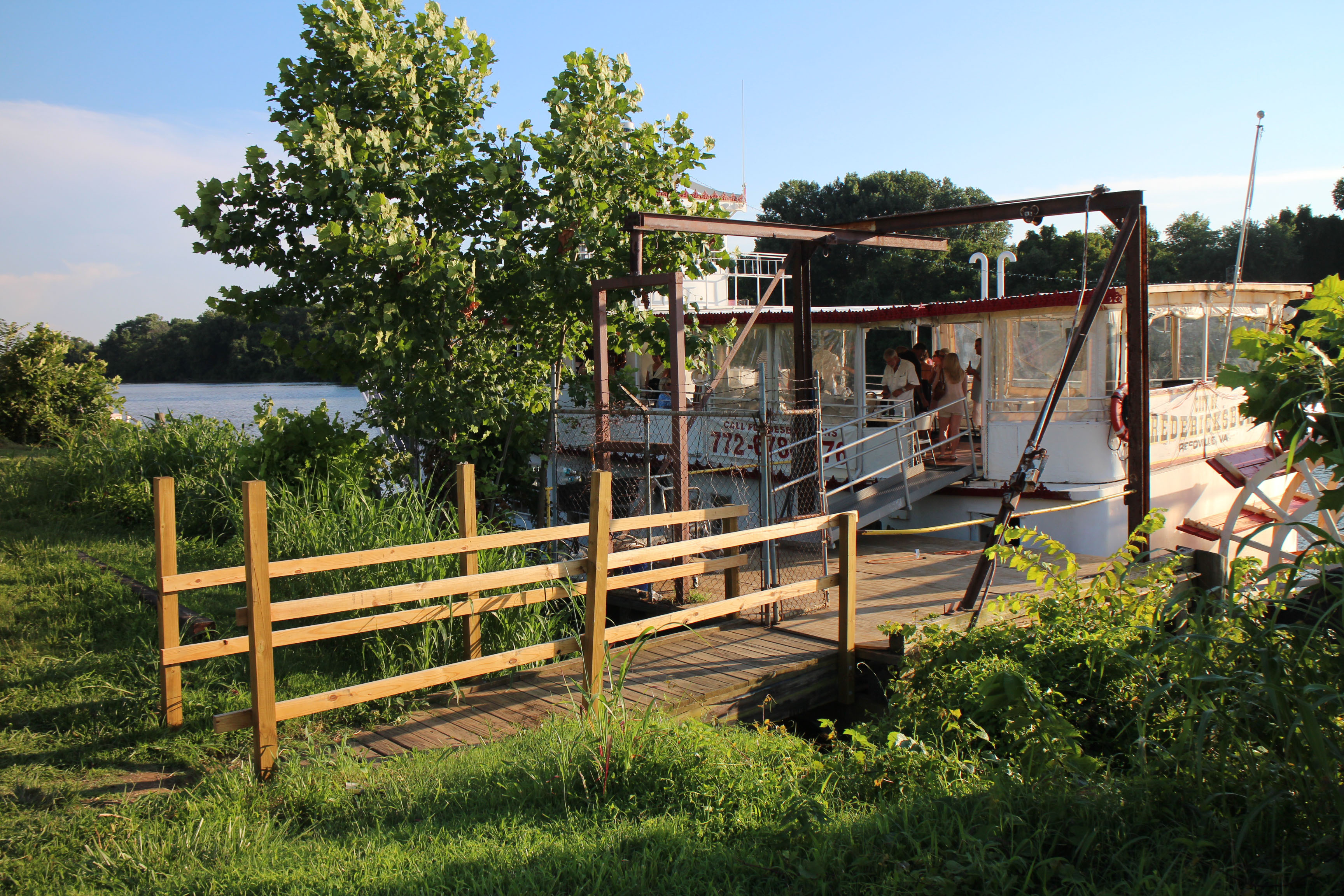 The river cruises include a dance floor, a bar and a buffet. Photo by Michael Shaw.

Sitting at the helm of his 75-foot paddle-wheel boat, Capt. Pearson rarely interrupts the music playing on the deck below during this particular July evening. It’s a Friday night, and most on board the City of Fredericksburg, which is back in Richmond for its second summer of weekly cruises on the James River, are younger than 30 and here to dance after they finish eating from the buffet.

But Pearson interrupts the Ellie Goulding song playing on the deck below. He has steered the boat east from its dock at 3101 Wharf St. toward the Chaffin’s Bluff estate along the James, the recognizable “JD” logo emblazoned on the waterfront lawn. 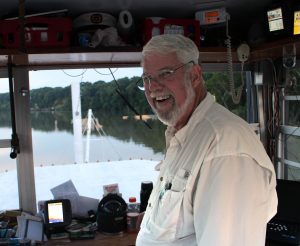 “Jimmy had a huge boat that he named after one of his songs,” Pearson says over the PA system to listeners unaware that the late sausage baron Jimmy Dean lived a prior life as a country music star. “He made enough money off the song to pay for it.”

Pearson had to work a bit longer to acquire his. The Northern Neck native was always a sailor, though, finding his first boat floating adrift along the Potomac River when he was 8 years old. When his father later started a cruise service to Tangier Island in the Chesapeake Bay, Pearson knew riverboat life was for him.

“‘I can get ’em drunk so they can’t leave, and I know I can sell them crab then,'” Pearson recalls his father saying of the potential for riverboat cruises.

Pearson may not have the same strategy as his father, from whom he took over the family-owned Tangier Rappahannock River Cruises company, but cruisers nonetheless enjoyed their share of libations from the cash bar Friday night.

The City of Fredericksburg first came to Richmond last summer after decades in the city that bears its name. A longtime tourist attraction for Fredericksburg, Pearson decided to move to Richmond and the James when the Rappahannock River in that part of the commonwealth became too shallow. He didn’t keep any employees from Fredericksburg, but many helped train his staff here, which includes a chef, bartender, steward and office support.

“We should have been here sooner,” Pearson says of the move. 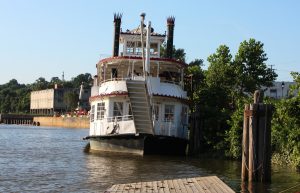 The City of Fredericksburg moved into Richmond last summer after decades in its namesake.

The City of Fredericksburg fills a void in the River City. The Annabel Lee, which was the area’s last paddle-wheel boat offering river cruises, stopped service in 2004. Riverfront Canal Cruises operates along the Canal Walk, but the 40-minute ride doesn’t include a bar, dance floor or boat-prepared buffet like the City of Fredericksburg does. Nor will it take you to the house that country music and sausage built.

So Pearson is the lone cruise captain in Richmond for now. He operated here last year from June through October, after which he sailed south to Martin County, Florida. Pearson offers winter cruises along a river there. He said recent success in Richmond may delay his trip to the Treasure Coast this year.

“I’ve pretty much made up my mind to stay here through New Year’s,” Pearson says. “I mean, they’re calling to book Christmas parties already.”

During day cruises, Pearson provides a fuller commentary about the boat and the scenery. His route, from Rocketts Landing to the eastern terminus of Osborne Turnpike, is ripe with nestling bald eagles and other birds of prey. But it’s the Dean house Pearson always mentions.

In addition to Dean, the City of Fredericksburg has access to another famed musician. A friend of Pearson’s went to high school with Virginia rocker Steve Bassett. The musician doesn’t have an official contract with Tangier Rappahannock River Cruises, but Bassett plays the last Friday of every month during cruising season.

“We got a pretty good deal,” Pearson says.

The City of Fredericksburg holds 130 passengers. It was cast in Toledo, Ohio, and formerly served as a riverboat in Detroit before Pearson purchased it decades ago.

Ticket prices range from $42-55 for adults depending on the day of the week (food included), with tickets less expensive for children and for groups of 25 or more.

It would be nice to know how to contact Tommy. Anyone have a phone number, email, website?