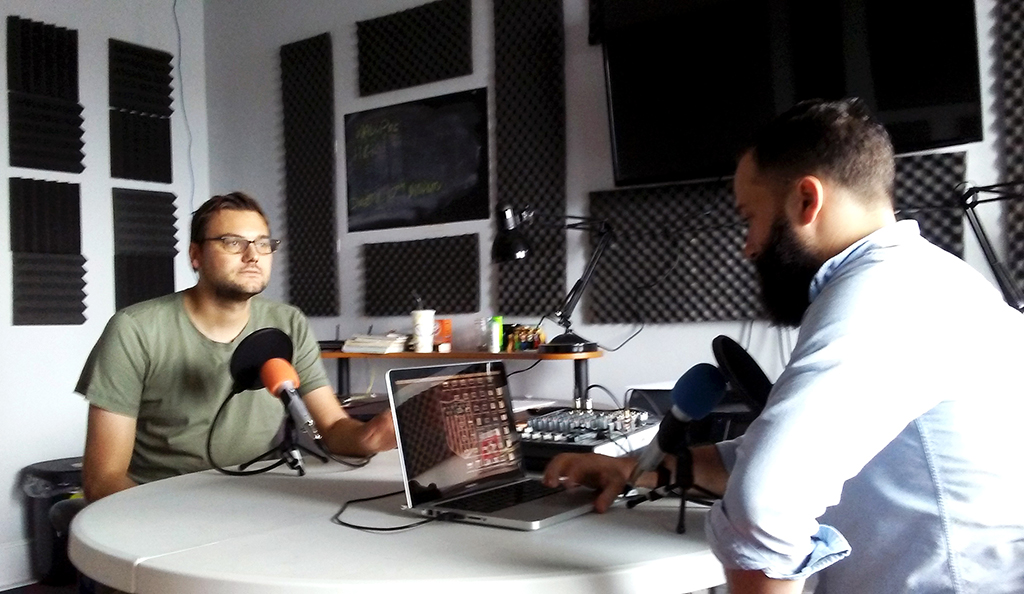 A soccer-centric local podcast with a national reach has expanded to five broadcasts a week in hopes of catering to its growing audience of listeners and advertisers.

Total Soccer Show, a podcast hosted by Daryl Grove and Taylor Rockwell, is following its success broadcasting daily during this summer’s Copa America and Euro 2016 international soccer tournaments. Those tournaments, along with the 2014 World Cup, helped the program eclipse 500,000 downloads in June, a new high for the show, while attracting additional interest from advertisers.

“That was our make or break moment,” Rockwell said of the 2014 tournament. “Before then, we were pumped when we got even 1,200 downloads.”

The co-hosts founded the show on the in 2009, broadcasting out of WRIR. Grove, an England native, and Rockwell, who lived for a time in Turkey, use the show to channel their passion for international soccer such as the English Premier League and Champions League, as well as the growing interest in MLS and the U.S. national teams.

They took excess material that couldn’t fit into the radio station’s 27-minute format and put it online as a podcast. Over time, the podcast eclipsed the radio program, with the duo’s conversational style proving better-suited for the online format than producing various segments on air. They trimmed podcast episodes, which average about 45 minutes, to fit into the radio format before eventually splitting off from the station.

In September 2015, they formed a limited liability partnership and leased 350 square feet at 530 E. Main St., which they use as an office and recording studio for the show. Bob Butler of Butler Realty leased Rockwell and Grove the office, which is now outfitted with sound-repellant foam panels, two recording microphones and a big screen television that they use to follow both domestic and international soccer news.

Advertising and contributors fund the podcast, which is able to pay Rockwell and Grove a salary in addition to covering operating costs.

Currently, 443 listeners contribute between $5 and $25 a month. Their contribution fees pay for increased access to the podcast, including a guarantee that one of their questions will be answered on the show.

Another fundraising method, called the Total Soccer Show Scouting Network, assigns an international teenage professional player to a contributing “scout.” These listeners submit scouting reports on the players to Rockwell and Grove, who then edit and read them on the podcast.  The co-hosts said they hope this system helps keep fans engaged and gives them international teams and players to follow.

“It’s like Tom Sawyer persuading his friends to paint the fence,” Rockwell said.

On the advertising front, the Total Soccer Show has been picking up steam. The podcast now has a different advertiser to sponsor each weekday it airs, including national ticket reseller SeatGeek and Wisconsin coffee co-op Just Coffee. Grove and Rockwell also work with soccer equipment company Futchi to make lighthearted YouTube videos.

“We try to provide content for our advertising partners,” Grove said.

Top download markets for the podcast, which is targeted to an American audience, include New York, Los Angeles and Texas. Virginia has the eighth-most listeners of American states.

Five additional co-hosts have filled in over the years, including when Rockwell lived in Northern Virginia for a time and when Grove would visit his family in England.

While the show has become a full time gig, Grove also works as a freelance copywriter, while Rockwell contributes to Atlanta-based Paste magazine. The two also partner as in-game broadcasters for official USL streams of Richmond Kickers home games.

Both during game broadcasts and during their podcast, Rockwell and Grove try to buck the trend of “hot takes” in sports punditry. If either a host or a guest says something that can’t be backed up by fact, the podcast founders will call out the thoughtless commentary and refuse to edit it the exchange out of the program.

“We actively tried not to adopt a sports talk persona,” Rockwell said.

This is greatly encouraging and inspirational. Keep up the fantastic work!

So who is who in this pic here?