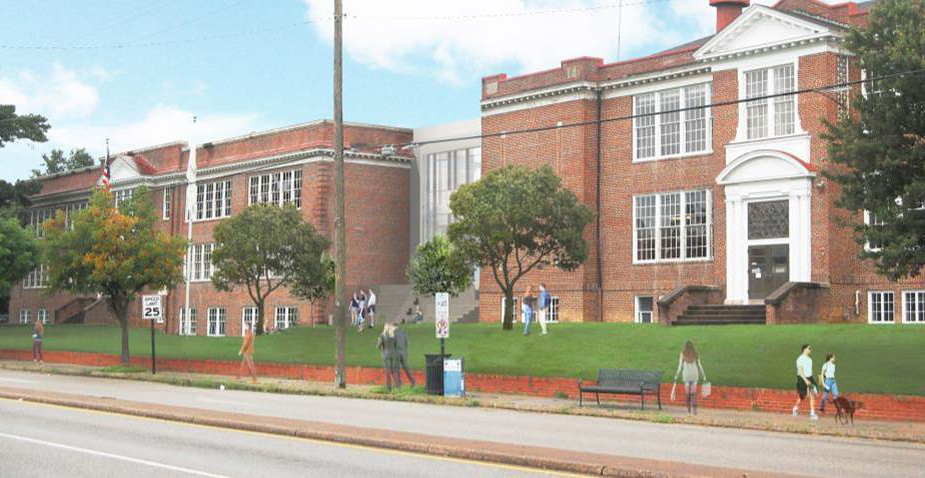 Bon Secours’ plans for its new Memorial College of Nursing along Patterson Avenue at the Westhampton School. (Rendering by Baskervill)

After little action for nearly five years, one of the region’s largest hospital systems is ready to move forward on initial steps toward reviving a prime, but dormant, West End property.

Bon Secours Richmond Health System officials on Thursday laid out more concrete plans for the eventual transformation of the city-owned Westhampton School, which sits on 6 acres at the corner of Libbie and Patterson avenues, into the organization’s new Memorial College of Nursing.

The organization had previously announced the site would someday house its nursing school, but Thursday’s meeting marks the clearest picture to date of Bon Secours’ intentions, although it didn’t provide a timeline for completion of the entire project.

Plans call for redeveloping the site to create a 90,000-square-foot school complete with simulation labs, classrooms, a library, an ambulatory bay area, faculty office space and congregating areas for some 350 students.

That would include demolishing both an existing auditorium and elevated breezeway connecting the campus’s two current structures, along with new construction.

Burt Pinnock, a principal architect with Richmond-based Baskervill who is overseeing the design of the project, said once the 80-year-old auditorium is razed, a new 50,000-square-foot, two-story building with a basement would rise in its place. He said the new structure would have the same height as the historic school buildings – about 55 feet.

“We wanted to make sure that we protected the integrity of the architecture of the buildings,” he said. “We want to enhance what is already there.”

The specs were unveiled at a community meeting held at an auditorium in Bon Secours’ nearby St. Mary’s Hospital. The gathering marks the beginning of what could be a four- to eight-month process to get the necessary permits and zoning needed for redevelopment. The organization did not provide a prospective budget for the project.

The organization said it is opting not to pursue historic tax credits for the project, as the preservation requirements would have constrained Bon Secours’ ability to have enough space to suit its needs. 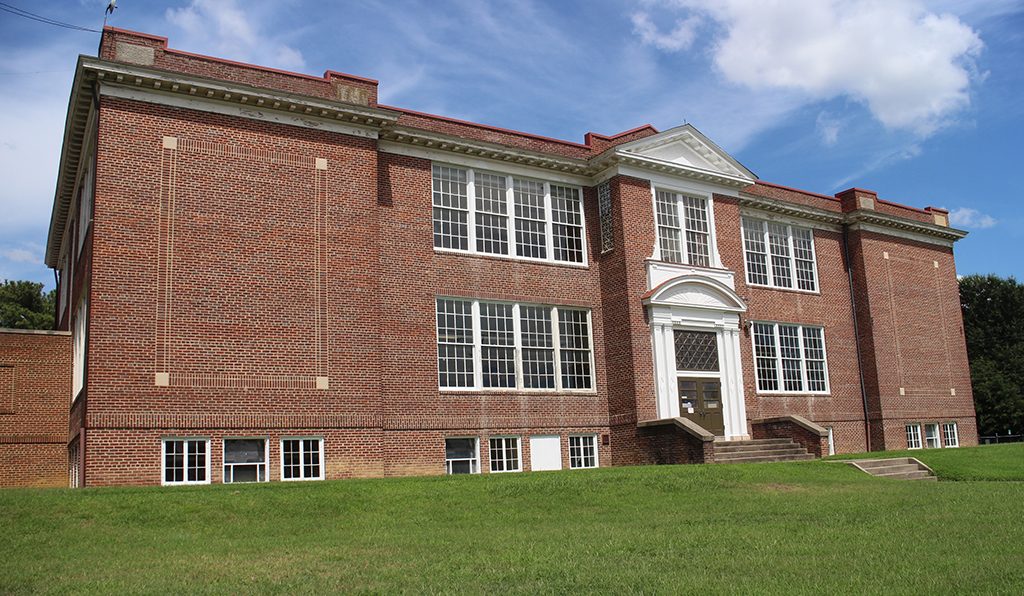 Jim Theobald, an attorney with Richmond-based Hirschler Fleischer who is representing Bon Secours in its zoning efforts for the project, said Thursday’s meeting was a requirement for the special use permit the healthcare company needs to get the project approved.

The site, most of which is leased to Bon Secours by the city for 60 years at $5,000 a year, is zoned residential. Theobald said the SUP is needed to get the proper zoning for a nursing school.

Bon Secours plans to submit its SUP application to the Richmond Planning Commission next month, Theobald said. Based on feedback from planning officials, the plan could go before the city council sometime in 2017.

“We still have some steps to go,” Theobald said. “But we’re moving in the right direction…there has been progress.”

The leasing deal between Bon Secours and the city was struck in 2012 as part of Richmond’s efforts to bankroll the Washington Redskins training camp behind the Science Museum of Virginia. The deal allowed Bon Secours to snag a property it had had its eye on for years, and the city got the big-dollar corporate backer it needed to secure the Redskins facility.

Bon Secours’ lease at Windsor Business Park is set to expire Aug. 31, 2021. In an email, Emma Swann, a Bon Secours spokeswoman, said while completion of the lease is about five years away, the hospital system could shuffle some of its administrative offices to the business park once the college moves to Westhampton.

The project calls for about 274 parking spaces, which includes about 1.75 acres of off-campus parking mostly along Chase Street.

Road access to the school will also be completely overhauled. Pinnock told neighborhood residents that access to the campus via Patterson would be prohibited – a measure that caused some residents in attendance to breathe a sigh of relief.

Rather, plans call for the school’s entrance access to be via Park Avenue, with Libbie and Maple avenues serving as collector streets moving the bulk of traffic onto Patterson Avenue.

The site’s current baseball field, which sits at the corner of Patterson and Maple avenues would not be developed. However, a one-way road with parking would force egress traffic to exit right onto Patterson Avenue next to the field.

If granted the green light for construction, the Westhampton campus would accommodate about 70 full-time staff and about 350 students – numbers Green said would not change.

“We have about that number at our site in Windsor Business Park,” Green said of Bon Secours’ nursing student population. “Having the additional space will allow us to schedule more classes since we’ll have a larger facility for our students.”

James Dunn, Bon Secours vice president of advocacy and community affairs, said the hospital system wanted to make sure it explored all possibilities for the site before it moved forward with plans to relocate its nursing college.

“We wanted to do our due diligence on the site,” Dunn said. “We looked into everything…including historic tax credits.”

With the plan in motion for development, Dunn said the hospital can execute its promise to provide more nurses in the region.

“Nursing jobs are in high demand across the region,” Dunn said. “One hundred percent of the students that will complete our program will be employed in the region.”

If there is one benefit to the City from the Redskin deal it’s the partnership with Bon Secours to redevelop Westhampton School and the East End Medical Center. I attended the football practice last Monday and found that many if not most of the fans on hand were from the surrounding counties. The same phenomenon occurs at the Squirrels’ games and the events on Browns Island. I couldn’t help but wonder if they’d support an increase in their suburban real estate taxes dedicated to supporting regional entertainment uses whose cost currently is borne solely by the tax paying citizens in… Read more »

So, is this still just in total limbo?