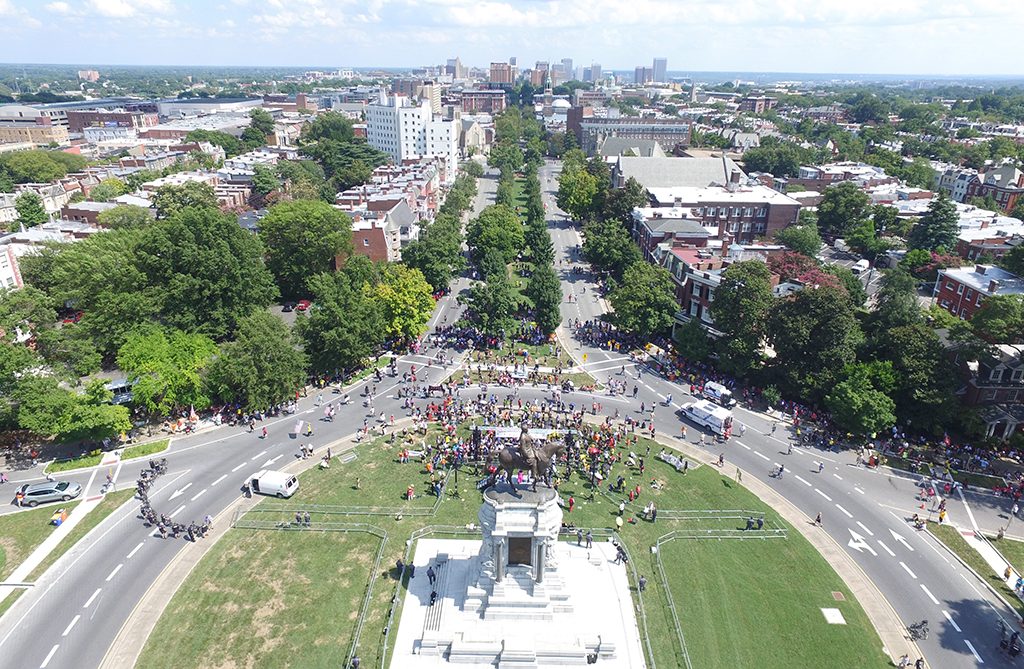 The group congregated for speeches in front of the Robert E. Lee statue on Momument Avenue. (Kieran McQuilkin)

They came from places like Chicago, New York and St. Louis – cities with strong histories of worker organization and recent progress in raising local minimum wages above the national rate, currently set at $7.25 an hour and not a cent higher in 16 states, Virginia included.

They came from fast food restaurants, childcare centers, cleaning services and a slew of other low-wage industries, demanding a $15 minimum wage, a union and immigration reform as part of a five-point program. 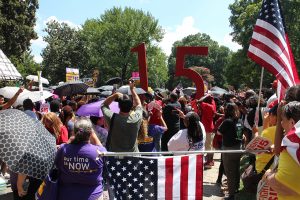 Fight for $15 supporters congregated in Monroe Park before marching up Monument. (Michael Shaw)

They came to Richmond.

The symbolism was intentional.

“We want to draw links between how workers are treated today and the racist history of the United States and the Confederacy,” said Kendall Fells, Fight for $15’s national director, when describing why his organization picked Richmond for what organizers hoped would be its largest convention to date.

Fight for $15 started in 2012 when 200 workers from 30 New York fast food restaurants went on strike for higher wages. Since then, 320 Fight for $15 groups have emerged from American cities and in 40 countries, involving workers from just about every low-wage industry.

Like Fells, most of the marchers Saturday were people of color. Rolandah Cleopattrah, a local activist who has worked on and off at fast food restaurants for a decade, said most employees at her Northside McDonald’s are black.

For Cleopattrah, spotlighting Richmond and the South was the most important part of the convention, which also included workshops at the Greater Richmond Convention Center on Friday and Saturday.

“Most of our national events have taken place in big union towns,” said Jillian McElgunn, a Richmond organizer with Raise Up, which serves as Fight for $15’s southeastern branch. “You’re dealing with these Right to Work states here in the South with mostly entrenched, conservative (political) incumbents.

“People see it as very threatening, especially down here.” 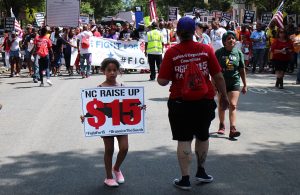 In five years working at McDonald’s, Cleopattrah has received three wage increases: two 10-cent raises and one 15-cent raise. She said she struggles to pay her bills.

Rev. William Barber, president of the North Carolina NAACP, was the event’s keynote speaker. He recently spoke at the Democratic National Convention in Philadelphia, a city represented on Monument Avenue this weekend.

“Labor without livable wages is nothing but a pseudo-form of slavery,” Barber said on a stage set up on the east side of the Lee statue.

A lieutenant with the Virginia Capitol Police, one of three police forces tasked with closing off Monument Avenue to motorists and keeping order, estimated 4,000 marchers had gathered Saturday. The turnout was significantly less than the 10,000 Fight for $15 organizers had estimated in city permit documents; but still large compared to other Richmond protests this summer.

The lieutenant said there had been no arrests at the event, with the only emergencies being medical-related as protestors and onlookers waded through 97-degree heat.

1. I would love for all these agitators to open their own business and see how easy it is to pay whatever rate they are demanding at that time, numbers pulled out of the air. 2. It would be wonderful if the public education system worked to educate such folks that an artificial wage will do nothing but cause job losses, usually first for black teens first then others. 3. The only people that tend to disagree with # 2 are people who do not own and run a business (as I do) or academics sitting in the faculty lounge… Read more »

Without the oportunity for these individuals to move up the ladder they will be kept in a state of perpetual poverty. As a consumer I would be willing to pay more for my purchases if I knew that would improve the life of your workers. The crux here for many business people is how much profit are you getting from your business? Would you be willing to accept a reduction in your business profit? If you are getting a 7% return you can afford to easily think about this. But if your rate of return is 2% then you simply… Read more »

The unquantifiable variable here is ambition. Those with the ambition to get paid $15 per hour probably didn’t have time on their hands to march. They were working at achieving a goal.