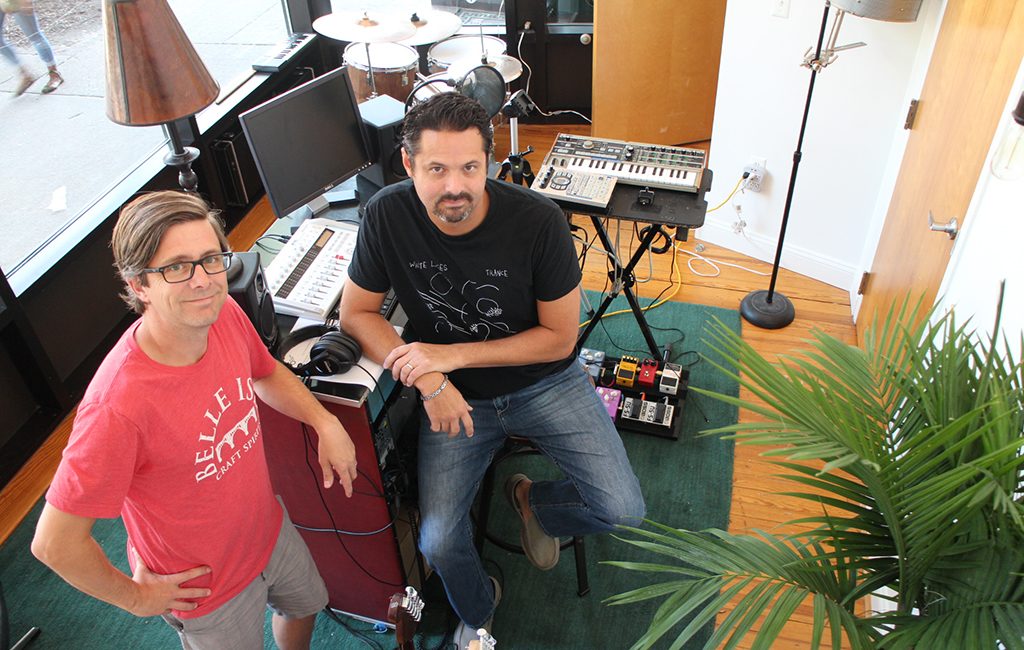 Available space at a downtown branding agency has brought a local record label to West Broad Street and resulted in a music education campaign and experiment.

The agency’s founder, John Mills, knew Henceroth from their days at St. Michael’s Episcopal School and Hampden-Sydney College, reconnecting with him recently through their mutual love for the band Clair Morgan, which is signed to Henceroth’s label.

Mills invited Henceroth to move Egghunt into his space, where Mills and his full-time staff of four had also been looking for ways to fill a visible storefront room that they had last used as a store during the UCI bike race.

The group came up with The SoundView Project: a sort of live-art experiment in which a musician – in this case Clair Morgan’s Troy Gatrell – writes and records new songs within the confines of the room over the course of one month, bookended by this month’s and next month’s First Fridays Art Walk.

The project puts the songwriting process on full display, both to passers-by on Broad Street and viewers online through social media platforms such as Facebook Live. The multimedia campaign includes interviews with other Egghunt artists discussing how music affects their lives, and the project is also soliciting – through Baltimore nonprofit Music 4 More – donations of used musical instruments to benefit Richmond Public Schools. 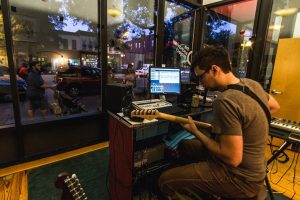 Mills, who like Henceroth has played in bands over the years, said the project evolved out of an appreciation for music among all involved.

“I’ve always been interested in the songwriting process, and how the normal, ordinary person has no clue into that world,” Mills said. “We were sitting around talking, and we were like, ‘Wouldn’t it be cool to do a live sort of art experiment where people could watch here, but also on Facebook Live, you could listen to what was happening and watch him formulate songs.’”

The SoundView Project will continue through the next First Fridays on Oct. 7. Gatrell will be in the room periodically, creating music as he has been since the project launched Sept. 2. His progress is being documented on the project’s Facebook page and other social media.

Meanwhile, Egghunt is settling into its new digs, adding to a transitioning stretch of West Broad that has seen the recent arrivals of locally based Rider Boot Company and homegrown shirt-maker Ledbury, which moved its headquarters into a space that previously housed Release the Hounds from 2010 to last year.

Henceroth, an anesthesiologist at Chippenham Hospital, said the move to West Broad from his family’s basement in Midlothian was something that was needed, even if he wasn’t actively looking for a space when Mills offered his.

“Working remotely, I would have to run down to the city to meet with bands and drop stuff off. It’s not really ideal. Moving in here gives you a hub,” Henceroth said. “It gives you identity, because we have the street visibility. People can walk up and down and see that we’re here now. It’s elevated the label.”

Filling part of Release the Hounds’ 1,500-square-foot space, Egghunt contributes to the agency’s lease through Bank Street Advisors but officially doesn’t sublease. The building is owned by the Ukrop family, which also owns the building that houses Ledbury and developed the nearby Quirk Hotel. 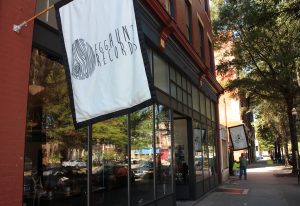 The local label has planted its flag at Release the Hounds’ downtown space. (Jonathan Spiers)

Henceroth runs Egghunt with three local interns and outsources certain services from a network of out-of-towners, a business partner in New York among them. He said the label’s active roster currently totals six acts – minus Dacus, who is now on indie label Matador Records but continues to give props to Egghunt on tour.

“I knew – and everyone had this feeling – that she would do so well, that I said when the time comes that these bigger record labels would want you, I’ll make a reasonable deal with them for them to buy the contract out,” Henceroth said. “We came up with some reasonable numbers, and it all worked out so well. And the whole time, she’s been just the best person to work with and super-professional.”

Henceroth said his long-term hope for Egghunt is to likewise support and nurture local bands, whether as a springboard to larger labels or as a haven for the Richmond music scene.

“There’s this initiative that’s real important that we just keep on developing local Richmond talent,” he said. “Me being an anesthesiologist and having a family and another job, my idea for Egghunt is I want it to do really well, but at the same time it’s not going to be Capitol Records.”

As for Release the Hounds, whose clients include locally based Eagle Bay, The Martin Agency and Altria, Mills said his agency is already benefiting from its new roommate.

“We’re always trying to do different things and find different ways to get involved in the community and surround ourselves with interesting, creative people. It’s a great energy,” Mills said. “We’ve all worked in offices where they are supposedly creative offices and they do not feel creative. There’s just a really good energy in here now.”

Congrats Adam! I knew all along that you would do well in the music scene…

Adam Henceroth
Reply to  Will Meyer

Thanks Will, we had fun doing the music thing, easy to do in RVA when so much talent abounds!