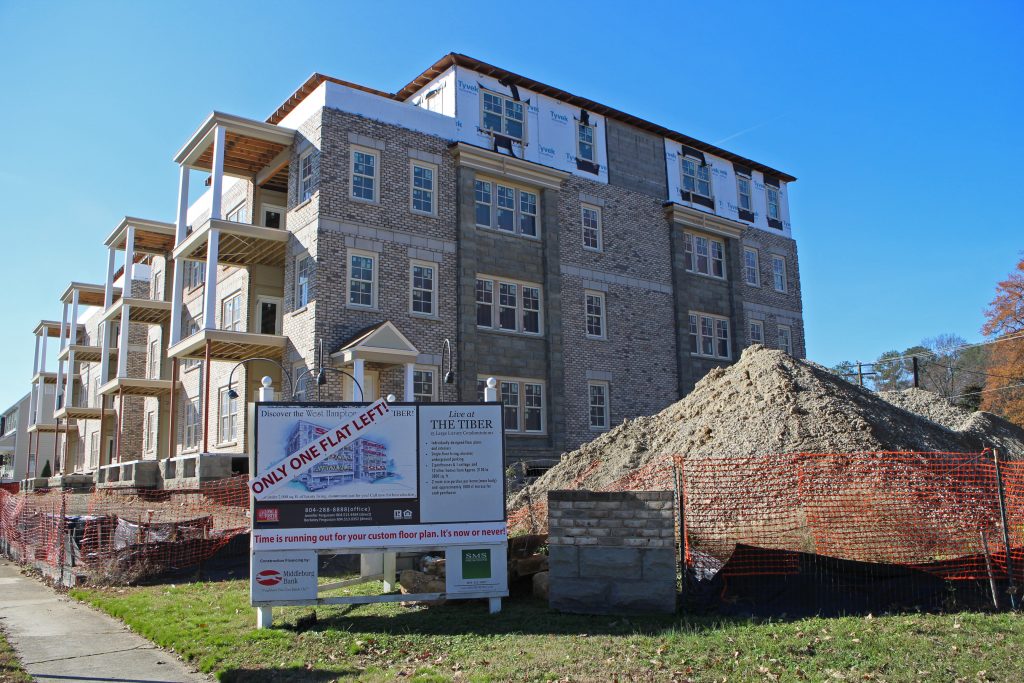 Only some progress has been made on the Tiber since this December 2015 photo.

A stalled West End condo project is now available to the highest bidder, with a judge’s blessing.

On Wednesday, a federal bankruptcy judge approved bidding procedures for the auction of The Tiber, a high-end condo on Libbie Avenue that has become byword for frustration and delay, and the trustee for the hearing set forth details of a possible sale.

The approval was part of the Chapter 11 bankruptcy case for Tiber Partners LLC, the entity formed to develop The Tiber. The company went into Chapter 11 protection in August after several Tiber condo buyers tried to force it into Chapter 7 bankruptcy.

Libbie Guthrie LLC, a company formed by John K. George, who was an original partner on the project and its general contractor, has entered an asset purchase agreement as the stalking horse bidder for the auction with a $2.9 million credit bid. The agreement also calls for $1.8 million to go back to condo purchasers either in the form of cash or credit, as well as $290,000 in estate fees and about $50,000 in taxes.

As part of the agreement, Libbie Guthrie would assume the second deed of trust on the property for Cypress Court Investments LLC and release the third deed of trust for George.

Libbie Guthrie LLC owns the loan on The Tiber – a $6.27 million note originally issued by Middleburg Bank. Libbie Guthrie had tried to foreclose on The Tiber after it purchased the loan, but the effort was foiled by the bankruptcy filing.

Should other bids be submitted by the Oct. 10 deadline, an auction will be held Oct. 12 in the office of attorney Loc Pfeiffer of Kutak Rock, who is representing the trustee overseeing Tiber Partners’ bankruptcy case. The trustee is Peter J. Barrett, also of Kutak Rock.

In opening remarks made to Judge Kevin R. Huennekens, Pfeiffer said the trustee had reached out to members of the development community to help decide what would be best for all the creditors, some of whom, Pfeiffer suggested, aren’t ready for a compromise.

“What we have done is probably the best-case scenario,” Pfeiffer said. “Anybody who has a problem can come in and make a bid.”

The Tiber’s problems date back to 2013, when the 15-unit high-end condo project broke ground after delays. George’s construction company, John K. George & Co., was the contractor until disputes broke out over the construction schedule.

Scott Boyers, a member of Tiber Partners, attended yesterday’s hearing and expressed in an email his dissatisfaction with the outcome the proceedings.

“The case of the Tiber is both a tragedy and a travesty as it relates to the proposed outcome from the bankruptcy trustee,” Boyers said. “Basically, the guy who couldn’t perform bought his way out and everybody else pays the price. The buyers deserve better than they are getting. The history and circumstances behind the case were ignored – it was only an auction, pure and simple. I see no justice in this outcome.”

Judge Huennekens sent his best to the trustee as the sale gets underway.

“You appear to have the tiger by the tail,” he said. “I wish you luck.”