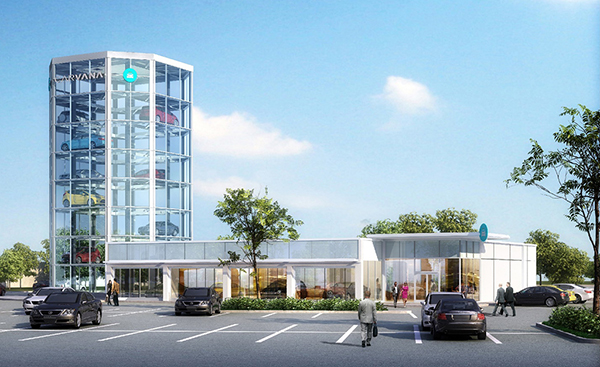 A rendering of the proposed Carvana tower in Short Pump.

One of the most unusual structures proposed in the Short Pump area will have its first go at securing approval this week.

National online used-car retailer Carvana is on the agenda for Thursday’s meeting of the Henrico County Planning Commission, which is set to consider the 3-year-old company’s request to build a 6½-story glass and steel tower that it calls the world’s first-ever “car vending machine.”

The company, which offers shop-at-home car buying, is requesting a rezoning and provisional use permit for the project and the tower’s height, which is proposed at 71 feet. The 8,200-square-foot auto fulfillment center, where customers could pick up their cars instead of having them delivered, would be built on an undeveloped 1.3-acre portion of Tom Leonard’s Farmers Market’s 6.3-acre parcel at 4150 Tom Leonard Drive.

The site, highly visible from Interstate 64, is on the opposite side of the West Broad Street interchange from the original location of used car industry leader and homegrown competitor CarMax.

Plans for the tower were filed with the county in August, and the project was slated to go before the planning commission in September but was tabled to this month’s meeting. In that time, the company has offered revised and additional proffers, such as prohibiting outdoor speakers and restricting hours of operation from 6 a.m. to 10 p.m.

Some of those proffers are intended to address concerns received from neighboring property owners and businesses. As of Friday, the county planning department had received two emails expressing concerns with the project.

One of the emails received came from The Generation Companies, a Raleigh-based company that is part-owner and manager of the adjacent Candlewood Suites Hotel. COO David Cook cites concerns about nighttime glare from lights on the structure causing a nuisance for hotel guests, as well as noise from trucks and customers, traffic congestion and the height of the tower, which he says “is nearly twice as tall as our hotel and surrounding development.” 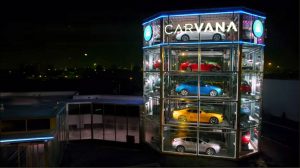 “This structure will literally stick out like a sore thumb,” the email states.

The other email came from Apostal Partners Virginia, which owns the Pier 1 retail center at 11114-20 W. Broad St. Managing partner Peter Apostal states the tower is “a bad idea” and “we vehemently object to” the requested rezoning.

“It is an obvious eyesore and totally inappropriate for the location and the image for Short Pump,” Apostal says in his email. “It is garish and reminds someone of Times Square. The brightness of the lighting, etc. is in obvious violation of existing standards and requirements.

“It is also in violation of the restrictive covenants that are binding on the adjacent property owners and businesses who purchased property and commenced business based on the restrictions in place that are binding on all of us,” he said. “…Carvana would have (a) negative impact on the other businesses in the area, would reduce property values and jeopardize the marketability of retail space going forward.”

Apostal concludes his email requesting that the rezoning application be denied.

Andy Condlin, an attorney with Roth Doner Jackson Gibbons Condlin who is representing Carvana, said the company has met with nearby property owners to address their concerns. He said additional proffers could be proposed before Friday to address the Candlewood Suites property owner’s concerns about lighting in particular, adding that lighting on the side of the tower facing the hotel could be reduced to security levels after the site closes at 10 p.m.

“We’ll be able to address those issues I think,” Condlin said Friday. “We’re fully committed to addressing their concerns.”

A county staff report says it could support Carvana’s request if the company addresses the lighting concerns.

Condlin said he did not expect to propose any revisions to address the Apostal email, which he described as mainly opposed to the building’s aesthetics. He also noted the Pier 1 property is at some distance from and faces away from the proposed site.

The project would represent an initial investment of $6 million, including an initial capital expenditure of $4.5 million, according to documents filed with the county.

Arizona-based Carvana entered the Richmond market in June, securing a distribution space at an undisclosed location in Petersburg.

It has built a similar vending machine tower in Nashville and is building four more in Texas.

Meanwhile, CarMax, which has been promoting its on-site dealership experience in a recent ad campaign, last month started testing a new home delivery service in Charlotte, North Carolina. Similar to Carvana and “McGeorge @ Home,” the home-delivery service of Henrico-based McGeorge Toyota, the new service would allow customers to select, test and purchase a car without ever stepping foot on a CarMax lot.

I can’t think of a better place to build this than Short Pump. It should be even taller.

I’m all for innovation and thinking outside the box when it comes to business, but this just seems to scream gimmick to me. It just looks like something that would be on the Las Vegas strip or a car sales lot in a big city starved for space. I guess we’ll see what the board thinks of it soon.

They should make this a giant claw machine like they have in the PuttPutt arcade.

Newsflash….all of Short Pump is one big mass of noise and light pollution.