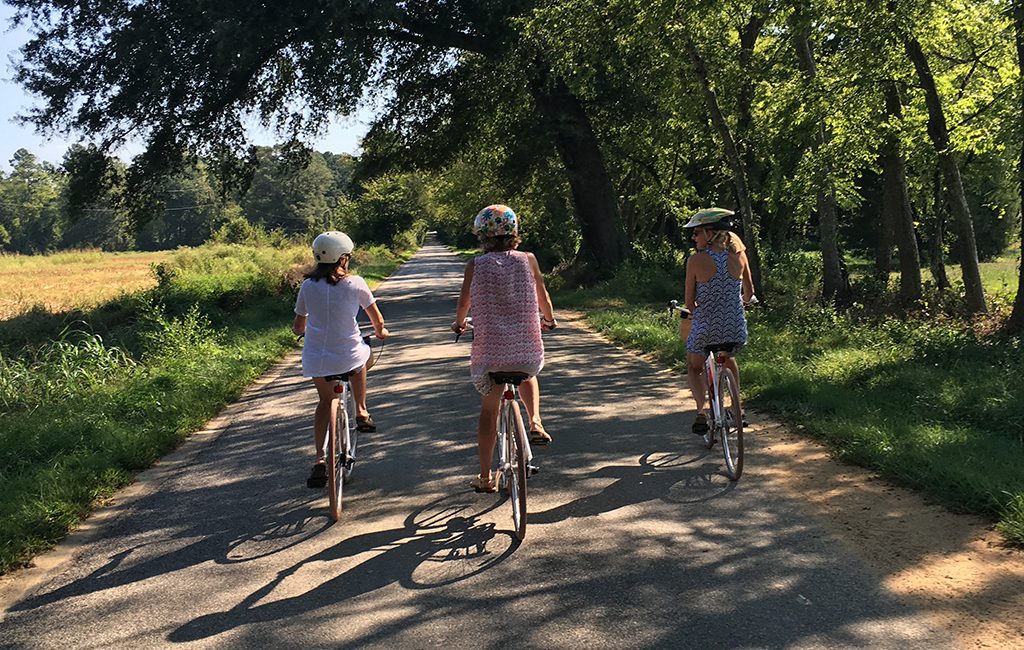 For many, the Virginia Capital Trail has provided an opportunity to hop on a bike and see the sights across the mostly rural route from Richmond to Williamsburg.

With a fleet of 16 Priority bicycles (and Nantucket front baskets), Poarch has launched Basket & Bike, a local startup that guides bikers up and down the trail to sites of historical or geological significance, pointing out historic landmarks and, depending on the ride, local destinations.

And the company offers a bite for the road.

The tours include a chilled water bottle and snack, housed in the bike’s front basket, and finishes with lunch, dinner or a wine tasting at a destination on the trail. But Poarch’s main focus is the area’s history–and its conservation.

“My signature tour focuses on the fact that we’re really right in the cradle of American history,” she said. “Not just the English settlers, but the Native Americans who lived there for thousands of years before the first settlers arrived.”

Poarch’s James River tour, “A Journey Along the James,” is based on friend and reporter Bob Deans’ book The River Where America Began. The 14-mile journey begins and ends at the Upper Shirley Vineyard, pedaling through the Shirley, Westover and Berkeley plantation homes.

Poarch pauses the tour to point out landmarks and sites of interest, beginning with ecological formation of the river, then into the combined local histories of Native Americans of the Algonquin Nation, English settlers, and African slaves. 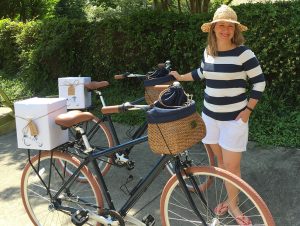 As the tour wheels to a halt back at Upper Shirley, riders are served lunch catered by the vineyard’s chef, Carlisle Barrister. Every signature ride includes a wine tasting at the vineyard.

An excursion with the vineyard’s lunch is $165 per person, and without lunch costs $125. Bike & Basket currently offers custom trips, the signature James River trip and corporate outings.

Though the goal is for tours to feel leisurely, one of Poarch’s main priorities is getting people on their bikes and outdoors.

Poarch was no stranger to geological beauty, growing up in the Sandhills of North Carolina, and studying in Switzerland and France. But it wasn’t until last year that she thought to combine her love of nature with the casual round-town bike rides she would make on her Dutch-style bicycle.

After she purchased the bike eight years ago (and received a basket as a gift from her husband the year after), Poarch began cruising farther outside town.

“I used it for exercise, and also just to go to farmer’s markets. It was my first foray,” she said.

It took a few more years before the Wake Forest University graduate – and financial advisor for 20 years – to think about how to get other people out on their bikes.

The wheels on Basket & Bike didn’t start turning for Poarch in summer 2015, after a Riverside Outfitters kayaking trip and a biking trip with her husband on the nearly complete Capital Trail.

Poarch had packed a gourmet snack for the trail, but they both wanted a little more.

At Can-Can Brasserie with friends a few weeks later, Poarch reminisced on the experience and was surprised to find her friends enthusiastic about the idea—even willing to pay her for a tour.

Not long after, the UCI Road World Championships cycling race took place, and Poarch began to plan for her new business.

“With the bike race in September, it seemed like a great time in Richmond,” she said. “I started writing concept ideas, I started talking to people about ideas.”

With the Virginia Capital Trail opening the month after, the timing seemed right. She started the business in November 2015, enlisted the help of Kate Chrisner, a friend from the Junior League of Richmond, as a part-time assistant and made the roughly $25,000 investment for bikes, branding, helmets and baskets, as well as designing and making the liners, advertising and insurance.

And when the question arose of how to cater the trips, a tip from a friend helped her make a connection with the proprietor of the Upper Shirley Vineyard, Tayloe Dameron. 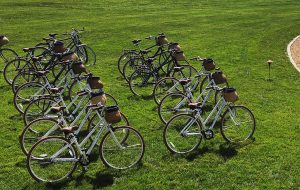 “I went out and met with Tayloe last October, and he was building up the vineyard at the time, and I thought, ‘well, that would have the food taken care of!’” she said, adding that she, Dameron and the vineyard’s seasoned chef Carlisle Barrister have been working on the tours together since the beginning of Poarch’s venture, starting Oct. 31 of last year.

Poarch’s first ride with customers was March of this year—a 50th birthday party for 12 people. The first part of the day went off without a hitch.

“We did an invitation, they arrived. The birthday girl got a bike basket with some fun things in it,” she said. “But then, we got out there–it was freezing cold and starting to snow.”

Though they had to reschedule the ride, Poarch saw it as an opportunity to test drive lunch at the vineyard, an all-around success.

Poarch has had customers private to corporate since then, including a corporate outing with Capital One in August. She offers a preset invitation for groups, and has begun to offer self-guided excursions with a reserved lunch.

Poarch looks ahead in many directions for expansion, though for now she is looking at marketing through an email subscriber list and social media.

She hopes to plan for more historical and conservation-based rides in the future, including an inaugural overnight trip to Williamsburg, and a tour of the VCU Rice Rivers Center, a facility off Route 5 devoted to research, field-based instruction and public outreach relating to conservation.

Other aspects of Poarch’s business include an online shop, where riders can purchase bikes, helmets and Nantucket baskets with removable cloth liners that Poarch designed.

“I found that while we were out there, things would bounce around in the basket,” she said. “It’s a drawstring, softer bag. It cushions, it gives you a place to put everything.”

And the bag is water-resistant, protecting cell phone and other devices from the elements—an important feature, since Poarch and her riders tour rain or shine.

Poarch eventually hopes to grow her online business by offering other stylish items for riding, such as scarves and floral rain ponchos.

“You don’t have to suit up in spandex and padded pants. You can wear a dress; you can wear heels on your bike.”

I sure hope Ms. Poarch instructs her customers not to ride the VCT three abreast as pictured in this article, otherwise her customers can look forward to getting yelled at by other cyclists.