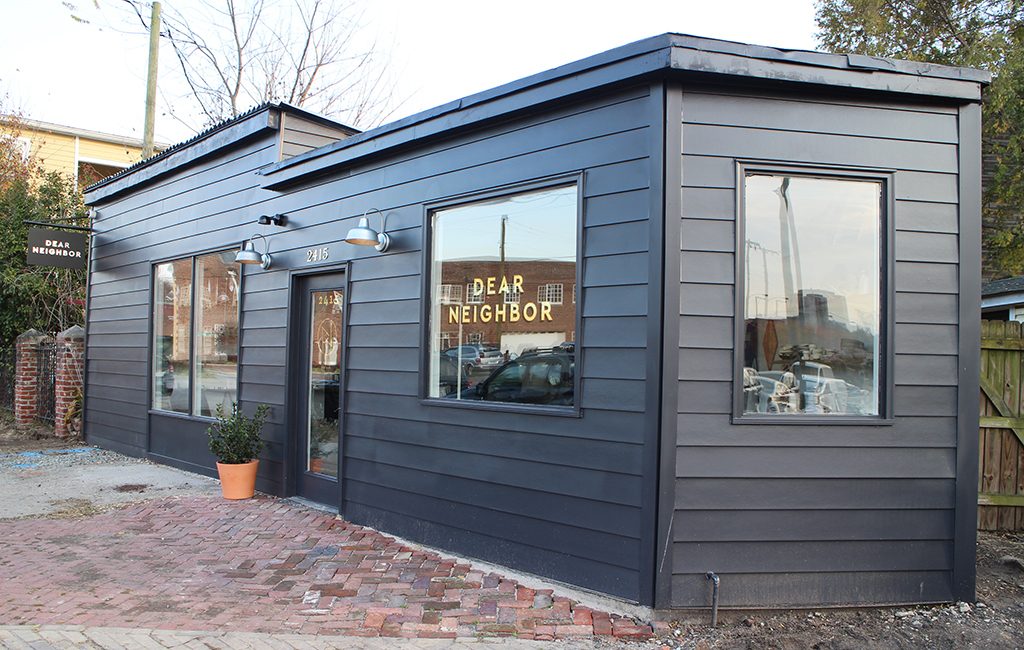 Just in time for the gift-giving season, a new gift shop and retailer about a year in the making is opening its doors in Church Hill.

Dear Neighbor is up and running at 2415 Jefferson Ave., in a renovated garage behind Sub Rosa Bakery that previously housed Sub Rosa’s bread milling operation and the original location of Ardent Craft Ales.

Husband-and-wife team Evan Cotter and Kristy Santelli Cotter are the owners of Dear Neighbor, which Kristy describes as a mix of Carytown retailers Mongrel and Need Supply Co.

“We really want to focus on bringing back the art of gift-giving and quality handmade goods that have a focus on brand and design,” Kristy said, listing local and international inventory that includes leather goods from Holland and ceramics from Israel and Brooklyn, New York.

“It’s really bringing all this awesomeness to Church Hill and to the neighborhood that we love so much. People love Church Hill for the restaurants and the parks and the community, and we really wanted to open a space that would add to that.” 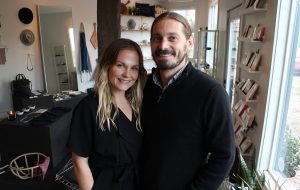 The couple purchased the 500-square-foot garage and adjacent duplex on North 25th Street a year ago for $177,500, according to city records. Since then, they’ve been going through the process of getting the property rezoned and obtaining a necessary special-use permit – a process that Kristy said was unnecessarily drawn out.

“The city makes it really hard for small businesses to open,” she said. “They make it impossible to navigate the system, there’s not enough people working there – I could go on and on.”

Kristy said she and Evan have been working down to the wire to finalize that process and get the store open in time for the holiday shopping season. The store held a preview event Wednesday evening and was slated to hold a soft-opening on Friday.

Kristy said they searched Church Hill three years for the right space for their store before finding the garage, which they renovated themselves and with help from friends and colleagues. She said they exceeded their $25,000 budget, outfitting the store with furniture made from a fallen holly tree from Maymont and wooden blocks and a checkout counter from Need Supply Co. Local cabinetry firm Martin-Star was also involved.

The couple has also landscaped the property and added a fire pit between the garage and the duplex, which they have made their residence. Kristy said the space is meant as a “hang-out” area for shoppers and neighbors – in tune with their shop’s neighborly name.

Kristy said Dear Neighbor adds more gift ideas and options to those offered at fellow Church Hill shops such as Tiny Space and Gather Home and Garden, both on East Marshall Street. She and Evan said they’re supportive of those shops and happy to join them in establishing a retail scene in Church Hill.

“There’s a growing retail community up here with Gather and Tiny Space,” Evan added. “The neighborhood got some restaurants, and now it’s getting more retail.” 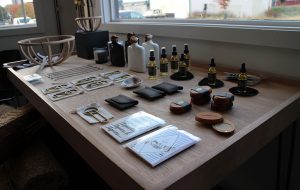 The shop sells gifts that include leather goods from Holland and ceramics from Israel and Brooklyn, New York. (Jonathan Spiers)

Kristy, 34, moved to Richmond seven years ago from New York, where she studied at the Fashion Institute of Technology. While teaching in Richmond, she started an online jewelry company called Drift/Riot, which she said led her and Evan, 35, toward the gift shop concept. Evan is a James River High School and VCU grad who also works as an art director for local menswear line Ledbury.

“We started going to trade shows and meeting all these really cool people wanting to share their brands with Richmond. We were like, ‘We should start a gift store,’” Kristy said. “I’m always running out trying to find a baby present or a card for somebody, and then you have to run somewhere else to get the giftwrap. We’re going to be a one-stop shop for gifting–but like a badass gift.”

Kristy emphasized the help they received from friends in getting the shop off the ground. They worked with contractor John Pishko, and Arielle Goldman drew up the plans for the renovation. They also got PR support from Ledbury’s Molly Hugel, and local designer Molly Covert helped with logo design and marketing.

“It’s been a really cool adventure, because there have been so many people that have helped us,” Kristy said.

“When we were going through (the Commission of Architectural Review) and the Church Hill and Union Hill associations, that was the easiest part of it,” she said, “because people were like, ‘This is the kind of business we want to open in Church Hill.’”

Congrats guys! Can’t wait to check it out.

So proud of both of you. I hope the store does really,really well.