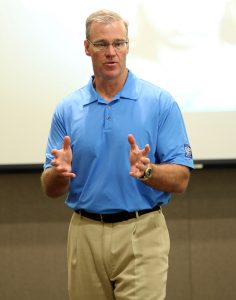 The deal closed just prior to Thanksgiving for an undisclosed sum. U.S. Security acquired ODS in its entirety.

Founded about 16 years ago as Old Dominion Security, ODS provides security guards, training and other services primarily to healthcare clients such as hospitals.

Wilkinson, who played linebacker at UR and went on to play for the Denver Broncos in the 1980s, bought ODS in 2002. He said his company’s focus on security for healthcare clients gave it a valuable niche with customers from Chicago down through Virginia and the Carolinas that helped attract its suitor.

He said the deal helps grow U.S. Security’s healthcare security division, while giving ODS the backing of a much larger company.

“It gave us a national reach without having to go through the expense to build that ourselves,” he said. “It provides rocket fuel to a model we initiated with ODS.”

He was driven to sell the business because the industry is consolidating under larger companies.

Wilkinson said another selling point was that ODS’ Richmond office will remain in operation and serve as the hub for U.S. Security’s healthcare division. That includes Wilkinson staying on as an employee.

“I’m staying involved,” he said. “I go from CEO to VP of healthcare services. I and the leaders in my unit now oversee and have direction for about $130 million in hospital (security) revenue. Our challenge is to grow that business and manage it as best we can.”