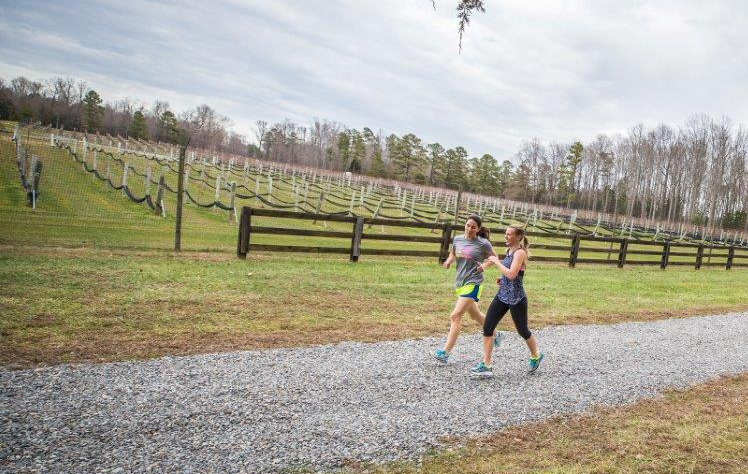 Correction: A previous version of this story incorrectly reported the race date. The correct date is Saturday, May 6.

Richmond’s biggest running race organizer has a new event in the works for those who like to bookend their workout with a little self-indulgence.

Sports Backers’ first Uncorked Half Marathon will be held May 6, taking runners through New Kent Winery, about 25 miles east of the city in New Kent County. All finishers will receive a medal and, naturally, a glass of wine.

Megan Schultz, event director at Sports Backers, said the nonprofit is excited to tap into the craft booze community in Richmond with this new race.

“For us, one of the big things in event creation is finding local and regional attributes that are important to the city,” Schultz said. “We want to showcase the up-and-coming craft beer and wine scene in the area.”

Joe Dombroski, who owns New Kent Winery with his wife, said Sports Backers approached him with the idea. New Kent Winery already hosts the Dionysus Dash, a nationally syndicated 5k run celebrating wineries, so he was open to the idea.

“Our newest vintages will be released in the spring, and many of our wines are in the Governor’s Cup Competition in April. So hopefully we’ll be able to showcase a winner or two at the run,” Dombroski said.

Sports Backers will be offering a few different race add-ons for participants, including a digital training team, and a Sip and Savor VIP package that includes brunch at the finish line and limitless wine and mimosas.

“We’re trying to theme it as a luxurious, treat-yourself experience,” Schultz said. Enhanced water stops with cheese and crackers, post-race yoga and massages, and a complimentary glass of wine are other ways Sports Backers hopes to add some opulence to the run.

“Sadly, we can’t hand out wine the way we hand out water cups during the race,” Schultz joked.

A festival will follow the event with live music and food trucks. Details of the event haven’t been confirmed.

Sports Backers is known locally for putting on the Monument Avenue 10k, Richmond Marathon and Dominion RiverRock, among other events.

Registration for the race is now open. Schultz said Sports Backers is actively seeking sponsors for the event.

Dombroski said the plans are for the Uncorked Half to be a multi-year event.