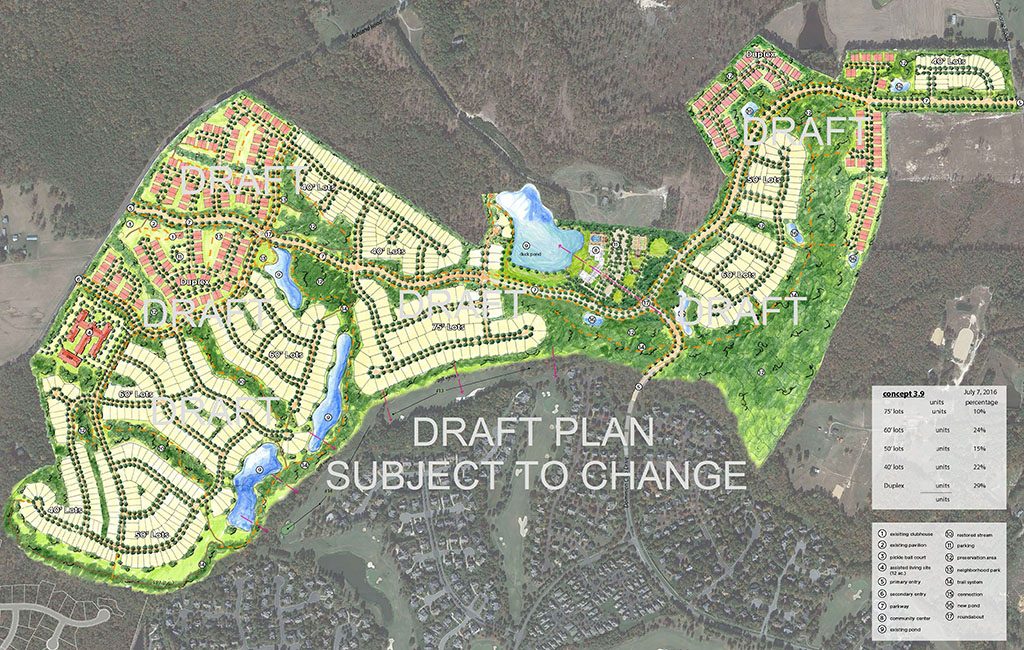 A drafted site plan of the Hanover development. (Courtesy HHHunt)

The developer behind some of Henrico’s largest residential communities is suing the county and its board of supervisors challenging their decision to not go forward with a road that would have connected its Wyndham development with another planned beside it.

HHHunt filed suit in December in Henrico Circuit Court seeking to nullify the county’s removal in November of a planned extension of Dominion Club Drive between Wyndham and the Hanover County line from Henrico’s future roads plan.

The extension had been planned to connect Wyndham with another HHHunt project across the county line in Hanover, but Henrico officials contend the size of the project has ballooned beyond what was previously envisioned for the road.

HHHunt is planning a 366-acre development on land that includes the nearby Hunting Hawk Golf Club. The age-restricted community for residents 55 and up would consist primarily of single-family detached homes and duplexes and include an assisted living facility, a restaurant and possibly a farmers’ market, according to plans filed with Hanover.

A requested rezoning to accommodate the project has yet to go before the Hanover planning commission. HHHunt filed its application for the rezoning in September.

The lawsuit, dated Dec. 9, seeks a judgment declaring Henrico’s removal of the road from its Major Thoroughfare Plan as an “invalid exercise of its authority,” contending the board failed to seek approval from the Virginia Department of Transportation and describing the decision as arbitrary and capricious. 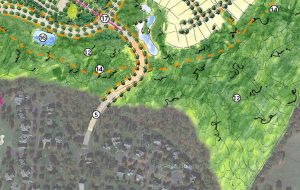 The suit was filed for the plaintiffs by Hirschler Fleischer attorneys John Walk and Alexander Boyd. Reached Tuesday, Walk said the suit was served 10 days earlier.

Tom Tokarz, deputy county attorney for Henrico, said the county will file its response next week. He said he expects arguments to be made in court, noting the complexity of the case and its references to documents dating back decades.

Tokarz clarified the road was removed by way of an amendment to the county’s thoroughfare plan, which maps out future roads planned in the next 10 years. A separate but related public hearing is scheduled for the board’s Feb. 28 meeting to abandon a completed portion of Dominion Club Drive, effectively changing it from a publicly maintained road to a private road.

Henrico planning director Joe Emerson said the removal was recommended to the board because county staff did not see a need for the connection or see it as a service to county citizens. He said when the road was included in plans for Wyndham, the project in Hanover was planned for less land and fewer homes.

Emerson said the county’s plans showed the Hanover project – essentially an extension of Wyndham – would be landlocked and not connect to major thoroughfares in Hanover. The plans submitted by HHHunt in September call for connections with two other roads: Ashland Road and Cauthorne Road.

Emerson said the county would not be interested in connecting the two developments even if the extension of Dominion Club Drive was redesigned. He said other primary roads such as Pouncey Tract Road provide connections between the two counties without needing to open up a residential road in Wyndham.

In the lawsuit, HHHunt says Loch Levan, Wyndham’s original developer, has owned since 1989 two parcels adjacent to Wyndham in Hanover that it planned to be developed as part of Wyndham. Those parcels total just over 100 acres.

HHHunt is now under contract to purchase portions of two more parcels totaling 115 acres, and Wellesley Land Limited Partnership owns a fifth parcel included in the project that totals 238 acres. The total area to be rezoned is just over 366 acres.

The lawsuit notes the county’s roads plan has shown the extension since 1991. It also states HHHunt has constructed upwards of $23 million in public infrastructure improvements related to Wyndham, and that it posted bonds or letters of credit for the construction of the extension including bonds that remain outstanding today.

In a statement, Kim Kacani, a senior vice president with HHHunt, reiterated some of the points made in the lawsuit.

“HHHunt has taken action in response to the Henrico County Board of Supervisors’ decision to amend the Thoroughfare Plan, deleting the extension of Dominion Club Drive from Henrico into Hanover County,” the statement read. “This road connection has been acknowledged and approved by Henrico County numerous times dating back to 1989, and to the original zoning and approvals of Wyndham.”

In addition to Wyndham, HHHunt has developed comparable large-scale communities in Henrico, including Twin Hickory, Wellelsley and Wyndham Forest. It also developed Charter Colony in Chesterfield.

Current projects include a 260-home community near Wyndham and its 250-acre, 1,000-home River Mill development near Virginia Center Commons.