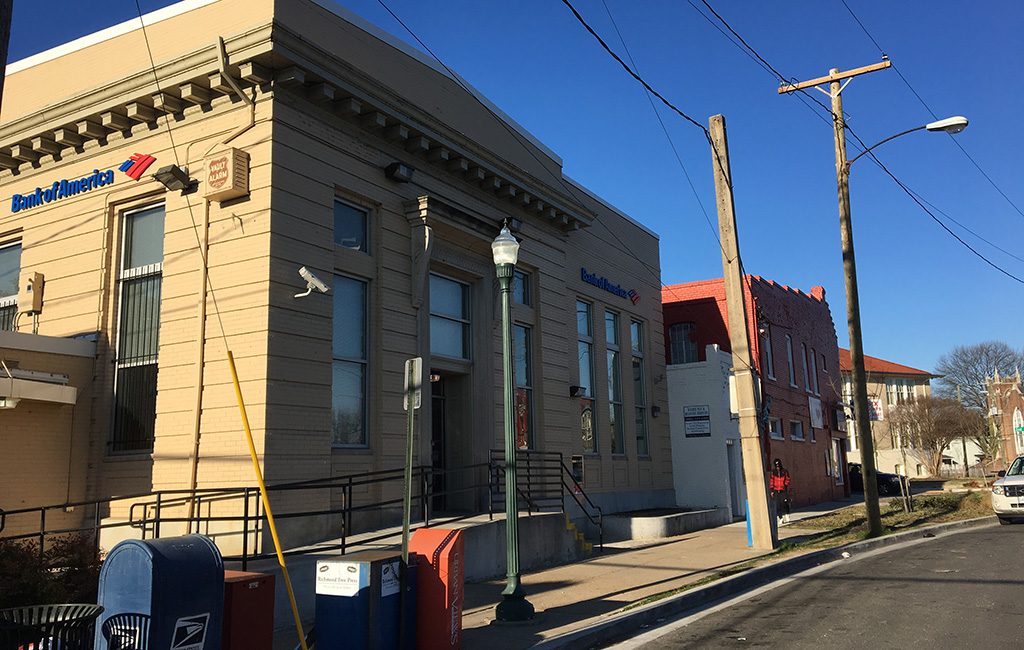 A group of Northside businesses and residents is trying to stop a banking giant from pulling out of their neighborhood.

Bank of America is slated to shut down its Highland Park branch at 1307 E. Brookland Park Blvd. in March. The closure was announced in December and an organized effort has since sprung up, bent on changing the bank’s mind.

Led by City Councilwoman Ellen Robertson, whose district includes that stretch of Highland Park, the group also includes residents, nearby nonprofit Boaz & Ruth and representatives of D.C.-based developer Community Preservation and Development Corp., which is finishing the $11 million conversion of the former school building across from the bank branch.

The group argues that the BofA outpost is the only bank branch in the neighborhood, with the next closest being 2½ miles away. The closure, they say, would leave the area without an easily accessible, traditional banking option.

Robert Johns, CPDC’s director of community development, said that 2½ mile distance isn’t as manageable as it seems for the neighborhood’s low-income residents who rely on the bus, particularly seniors.

“It sounds close, but on a bus at night it’s 35 minutes and during regular business hours is 45 minutes to an hour,” Johns said.

A community meeting was held on the topic in late January, and Johns said the worry is leaving residents to check-cashing stores and payday lenders, financial alternatives often described as predatory because of high fees and interest rates.

“The loudest sentiment that came out of the meeting was, ‘Please, no payday lenders or check cashing,’” Johns said.

Robertson said the group sees the closure as ill-timed, pointing to CPDC’s Highland Park Public School project as one of several changes that are taking the neighborhood in a positive direction that will attract more residents – and potentially more customers for the bank.

“We’ve made the argument that now is not the time to consider pulling out of this community,” Robertson said. “We feel the community is on the cusp of major development.”

BofA Bank spokesman Matthew Daily said the branch’s closure is based on a review of its performance, coupled with changing trends in branch traffic due to online and mobile banking.

“In this case the customer traffic isn’t there like it’s been in the past,” Daily said of the Highland Park location.

While the bank wouldn’t discuss specifics of the branch’s financial performance, the branch held $13.53 million in deposits as of June 30, 2016, according to FDIC records. That was far below the deposit levels of any of BofA’s 23 offices in the Richmond metro market.

The next lowest deposit total at a local BofA branch was $30.25 million at 7203 Midlothian Turnpike. BofA controls around $12 billion in deposits locally.

Daily said the bank did take into account the distance from the Highland Park location to its nearest branches.

“In this case, we have four financial centers within four miles,” he said.

Robertson said the group has sent a letter to the Office of the Comptroller of the Currency, one of BofA’s federal regulators, asking for a hearing on the matter. She said they are still awaiting a response from the OCC.

Daily said the branch is still scheduled to close in March, but the neighborhood group’s efforts led to a meeting last Thursday with Bank of America representatives.

Johns attended the meeting and said they explained the importance of the bank to the neighborhood.

“Even a couple of the (BofA) representatives there were like, ‘Wow, we didn’t know there was such a history of it being a neighborhood bank.’”

Robertson said BofA representatives also were surprised to hear of recent and planned changes in the neighborhood.

“Based on what Victor (Branch) said, he was extremely surprised and truly was not aware of all that is taking place in the community,” Robertson said. “We feel very optimistic about the meeting.”

Boaz & Ruth CEO Megan Rollins said her organization, which helps citizens re-enter the community and the workforce after serving prison sentences, has its office nearby on Meadowbridge and has been a customer of that branch for years.

“They’ve allowed our participants to open accounts when other banks wouldn’t,” Rollins said.

“Our primary focus is to help returning citizens to rebuild their lives and we encourage them to utilize a bank to save their money rather than a check-cashing place,” she said.

Rollins said should BofA not change its mind, an acceptable compromise would be for the bank to leave an ATM machine in the neighborhood.

Daily said that is a possibility: “We are looking at ways we might be able to leave an ATM nearby.”

It’s unclear who owns the 4,800-square-foot building, which was constructed in 1948. City records list the owner as Sovran Bank, care-of Bank of America. Sovran was a predecessor of BofA.

Daily said the bank leases the building, but he was unsure of who owns it.

Why should B of A, or any for profit business stay in an area that does not provide them a current and/or projected growing profit forecast that meets their standard? If other financial institutions see this as a growing asset they will step in.

There was (and many say still is) a practice known as redlining. It is now illegal. The closure of bank branches in those areas is often associated with it.