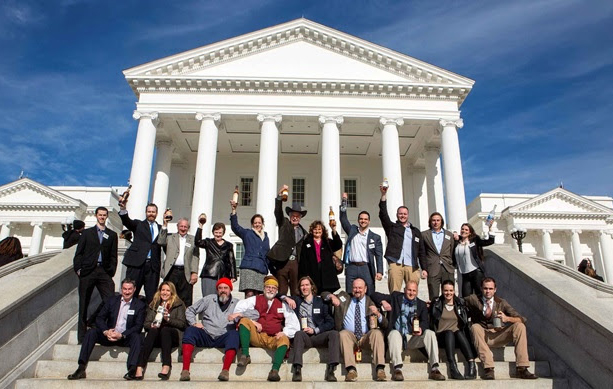 Members of the VDA and Virginia legislators celebrate at the State Capitol building. (Jay Paul Photography)

Last week at the General Assembly, a pair of bills unanimously passed through the Virginia House and Senate to simplify the way distilleries sell bottles of their products at festivals and other events.

Currently, distilleries cannot sell bottles directly to consumers at events. Their bottles can be sold only through Virginia Department of Alcoholic Beverage Control tables or stands manned by ABC employees.

The bills are seen as a way to level the playing field in the state’s booze industry by allowing distilleries to enjoy the same privileges available to beer- and wine-selling peers.

The Senate bill is headed for a vote in the House, and vice versa. If passed, the next stop would be the governor’s desk.

Curtis Coleburn, government affairs director for the Virginia Distillers Association and former ABC executive, said since the bills are identical, they should continue through to the governor with no problem.

“Hopefully it’s just a formality,” Coleburn said. “The House bill will probably come up on Friday, and it’ll likely be on the Senate floor next week. Once one of the bills is passed by both houses, and we expect them both to, it’ll go into law July 1, following the governor’s signature.” 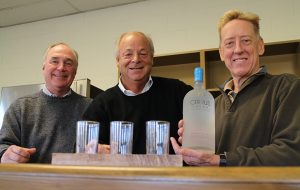 Passage of the bill would mark a second legislative win in two years for Virginia distillers. Last year, regulations were changed to increase the amount distilleries could serve customers at onsite tasting rooms, from 2 to 3 ounces, which has helped more tasting rooms pop up throughout the state.

Coleburn said the VDA is being methodical in fighting regulations each year.

“I think the VDA is trying to do it smart. We’re trying to pick battles that we can win, and show we’re responsible so legislators will trust us on future things we ask for,” Coleburn said.

Amy Ciarametaro, executive director of the VDA, said the association isn’t just keeping busy in the State Capitol building. The VDA is working to create a Virginia Spirits Trail and establish September as Virginia Spirits Month.

“We’re in the preliminary stages, but it’s similar to what Kentucky does with the Bourbon Trail,” Ciarametaro said of the Virginia Spirits Trail. “It’s a no-brainer for increasing tourism for the commonwealth, and bringing in new revenue for the state.”

Ciarametaro said the group is working with the Virginia Tourism Corporation and ABC on Virginia Spirits Month.

“The ABC has afforded a discount on all Virginia spirits for September,” Ciarametaro added.

The Virginia Distillers Association formed in June 2016. Its members include Richmond-based Belle Isle Craft Spirits and James River Distillery, and Ciarametaro said locally based Cirrus Vodka will soon be a member.