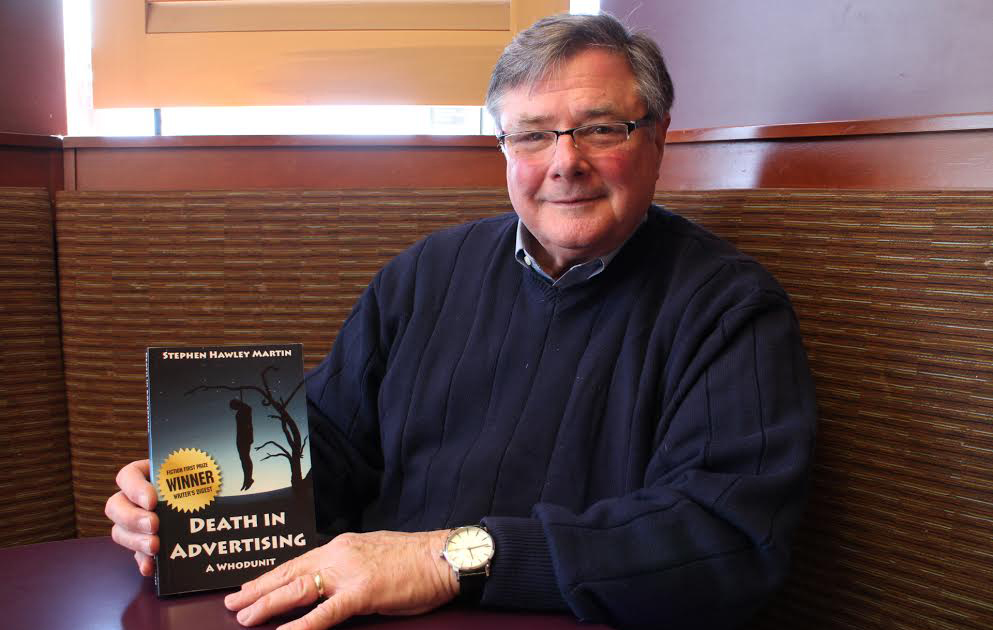 Stephen Martin with his book, “Death in Advertising.” (Jonathan Spiers)

While his surname is synonymous with advertising in Richmond, it’s been putting pen to paper outside the family business that has helped Stephen Hawley Martin make a name for himself.

The younger brother of David Martin, cofounder and namesake of The Martin Agency, Stephen Martin divides his time between continuing the family profession with his own firm, Hawley Martin, and the personal passion he’s found outside the office: authoring, ghostwriting and publishing books.

A veteran adman with three decades in the industry, Martin has authored or ghostwritten 17 books, including business guides, self-help and how-to books, and four novels – all published through his publishing company, The Oaklea Press.

Many of his books draw on his experiences in advertising, including his eight years at The Martin Agency, where he was a senior vice president in the 1980s. One novel, “Death in Advertising” – a “whodunit,” or “cozy,” as Martin described it – draws on those years in particular, he said.

“The new business pitch in this book is inspired by a pitch we did at The Martin Agency,” he said. “It was really more a campaign than a new business, for Lane Furniture in Altavista.”

Many of his characters also are inspired by people Martin has worked with – a device he admits freely while taking care to not name names.

“It’s really a fun book from my viewpoint, because the characters in it are drawn from people I’ve worked with over the years. The creative director in this book is very close to somebody that I worked with who is quite a character,” he said. 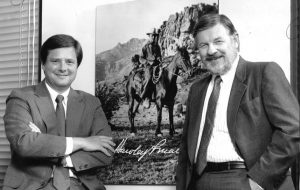 Stephen with his brother David Martin, right, beside a picture of their father, cowboy-adman Hawley Martin. (Courtesy Stephen Martin)

Laughing, he added: “He can figure that out for himself. I don’t want him to sue me.”

In addition to novels, Martin writes how-tos and industry guides for various clients, some of whom followed him over from their work with Hawley Martin, the branding agency he leads with a group of consultants. The firm is named for his father, a former ranch foreman (“cowboy”) who also worked in the ad business.

“He started out branding cattle and ended up branding products,” Martin quipped.

A Hampden-Sydney grad, Martin followed his father and older brother into the family business, which also involved their mother, who Martin said worked as an office manager for a local agency. He took a job with an agency in Baltimore before returning to Richmond to work for his brother, who was continuing the agency he founded with George Woltz and renamed The Martin Agency.

After The Martin Agency was purchased in 1986, the Martin brothers started the first iteration of Hawley Martin, which at its peak employed about 45 people, Martin said. The firm was purchased by Interpublic Group – which now owns The Martin Agency, though it didn’t at that time – and merged with another agency that had offices across the country. Martin said his job became traveling to those offices to get them to work together.

“I really did not like that a whole lot after a while, because what I like to do is help make the mud pies,” he said. “I like to write ads and create advertising campaigns and write books, and here I am going around and being a babysitter to these eight different offices.”

Hawley Martin was ultimately sold to Boston-based agency Arnold, and the name disappeared until the brothers revived it in 2011, when they renamed David Martin’s branding firm as Martin Partners, setting the stage for the relaunch of Hawley Martin two years later. The reunion was brief, however, as David Martin died suddenly from cancer in 2012.

“That kind of took the wind out of the sails a little bit,” Martin said. “But I still have some clients that I’m working with, and I continue doing the publishing.” 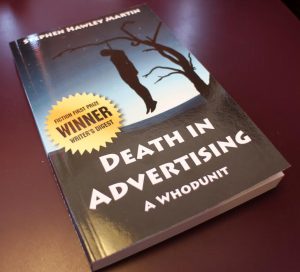 “Death in Advertising” is inspired a Martin Agency pitch to Lane Furniture in Altavista. (Jonathan Spiers)

While Hawley Martin remains active, averaging about six clients a year, Martin said, he spends as much time, if not more, on his publishing. Where his business books can take six weeks or more to write, depending on research required, he said he spends an hour a day on his novels, which he said can take six months to a year to complete.

While his business books have become a second source of income, Martin said his novels are written for love, not money.

Laughing, he said: “I couldn’t really justify the time put into them. They sell, but they’re not the business books.

“I really get caught up in it. I think when you are doing something you like and enjoy, you get in the flow, and that is certainly something I experience when I’m ‘on’ and writing. It’s a craft,” he said. “Being able to communicate something in words that really says just what you want it to say is gratifying, and constructing a story is gratifying.”

Beyond the parallels he creates in mystery novels, Martin said he has found commonalities between the publishing world and advertising and marketing.

“It’s related in the sense that when I do either editing or ghostwriting, it’s the same skill as writing ads and websites and so forth. I know the industry, and I can put together the books, and then once you have them you’ve got to promote them, and most of the promotion nowadays, like everything else, is done over the Internet.

“I was kind of split between publishing books and doing advertising,” he said. “I’m probably at this point putting a little more emphasis on the publishing and ghostwriting.”

As for his next novel, Martin said he is in between books but has ideas to put to print.

“I think it’ll be a thriller,” he said. “It’ll probably have some kind of paranormal stuff going on.”

Editor’s note: If you, a coworker or someone you know around town has an exciting or unique way of passing time when off the clock, drop us a line at [email protected]. For previous stories from our ongoing Downtime series, click here.