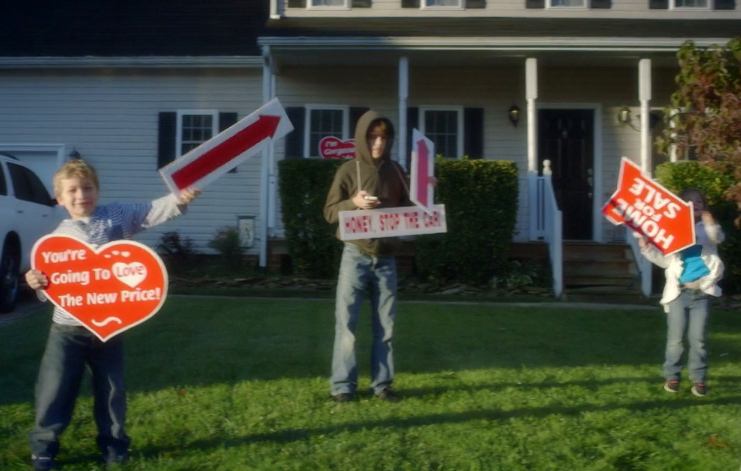 An image from the group’s latest commercial, in which a home seller resorts to having children spinning “for sale” signs in her yard.

On the heels of a yearlong poster campaign, a local real estate group is turning to TV to continue its regional marketing efforts.

The Central Virginia Regional Multiple Listing Service has launched “Leave it to the Realtors,” a series of TV commercials featuring two 30-second spots and two 15-second versions that continue the Richmond Association of Realtors’ ongoing “We Are the R” promotional campaign.

The ads were directed, written and produced by Kate Landis, marketing and public relations manager for RAR and CVRMLS. She said they’re aimed at showing homeowners potential pitfalls of trying to sell a home without a Realtor, with a humorous approach.

Filmed in Chesterfield’s Foxfield and Collington-Ashmill communities, and in model homes built by Midlothian builder Main Street Homes, the first 30-second spot and its two edited-down versions show a homeowner resorting to having children spinning “for sale” signs in her front yard and asking a Siri-like phone assistant for selling advice.

“I wanted to do something fun, because real estate seems to be a serious topic with lots of figures and numbers,” Landis said. “I wanted to add a fun element to it.

“Realtors are always looking for ways to reiterate their value proposition, being in a service-oriented industry. So we like to provide them with tools to help them do that,” she said.

The first-time director worked with filmmaker Matt Doe of Richmond-based When Frames Drop, who Landis knew from VCU. The two previously worked together on a crowdfunding video for a brewery in Woodbridge. Doe also had participated in a 48-hour film festival with Chesterfield-based Broken Leg Theater, which Landis works with as PR director.

Landis said the spots are the first TV ads put out by RAR and CVRMLS in the seven years she’s been on staff. Production began last summer and wrapped up late last year. Landis did not disclose the cost of the project.

The first 30-second spot will begin airing locally this week and run through May on the Golf Channel, Fox Sports 1, CNBC, MSNBC, HGTV and DIY. The 15-second versions will run as online preroll ads on Comcast streaming services, WCVE, YouTube, Facebook and Pinterest.

A second 30-second spot will be released in late August. CVRMLS worked with Comcast Spotlight on media buying, Landis said.

Last year’s posters remain available for free download at the campaign’s website, WeAreTheR.com. They also can be purchased at RAR’s headquarters at 8975 Three Chopt Road in Henrico County.